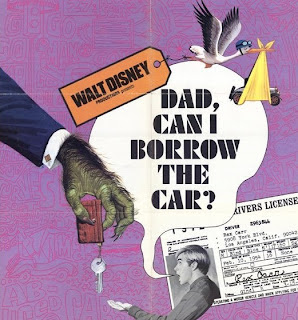 Disney animator, director, producer and iconoclast Ward Kimball won an Best Cartoon Short Subject Academy Award for his crazy-quilt, multimedia featurette It’s Tough to Be a Bird (1969). Ward’s follow-up is not as well known but it’s very much in the same mold and equally entertaining and more mind-bending than its award-winning predecessor. Dad, Can I Borrow the Car? is the offbeat producer/director’s kooky look at America's crazy love (and hate) affair with the automobile. Narrated by Kurt Russell, Disney’s superstar of the late 1960s and 1970s (see here for more on Kurt and what he was up to in 1970), this 22-minute featurette was released on September 30, 1970, and combined animation, live-action, photographs, collage and more, all combined in cutting-edge, avant garde style. Zany, fast-paced and unpredictable, the unique satire traces the life of a typical, all-American boy (vocally played in the narration by Mr. Russell) from infancy to adolescence and young adulthood, as impacted by "wheels". Like all boys (as the film would have it), this young man is infatuated with cars from the moment of birth—when spanked by the doctor, the baby’s cry sounds just like a car horn. Highlights include an animated race between two pinstripes all over a live-action car and several humanized cars (predating Cars by over three decades) who do their own verbal hard sell in a used car lot. An expanded version of this bursting-with-creativity featurette aired on TV’s The Wonderful World of Disney on April 9, 1972, bringing things full circle as this exploration of our car culture was originally planned as an episode of Disney’s anthology TV series before it was decided to give it a theatrical release. Never released on DVD (too bad it wasn’t included as an extra on the double disc DVD release of The Love Bug [for which I did image and other types of research], which you can get here

), Ward Kimball's Dad, Can I Borrow the Car? deserves a wider audience today. As it is, this delightfully different Disney production was years—and miles—ahead of its time.
Posted by Jim at 1:27 AM

Wow, Jim, you are OH SO RIGHT, as always. This is an extremely entertaining film that deserves to be seen more.
After reading your wonderful writing here, I was inspired to seek out more on the net and discovered that the film is posted in three parts on YouTube. Though the quality is certainly not what an official DVD release would provide, it does at least give a welcomed opportunity to instantly view the film. If you'd like to share it with your readers, here is the link!
http://youtube.com/watch?v=PT9ezrplrM8

I believe I saw this in the theater at the age of 10 or 11. I still remember the racing pinstripes after 37 years.
Chris