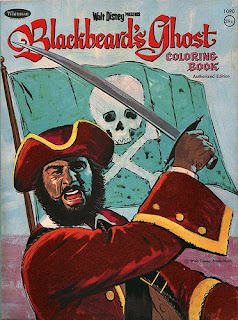 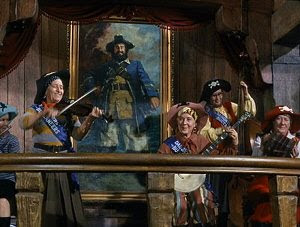 What could be better for Halloween than ghosts and pirates? How about a ghost who is a pirate, or vice versa? One of the most striking things about Walt Disney's sly-and-spooky comedy Blackbeard's Ghost (1968) is the magnificent painting of Blackbeard (seen below in a still from the film). Many Disney fans are well aware that the full-length portrait (painted by David Jonas) was for a time featured in the climax of Pirates of the Caribbean at Disneyland Park, but how many folks know that the painting was reproduced on the back cover of the Blackbeard's Ghost coloring book? Looking for a Halloween (or anytime) treat that's not a trick? Check out the article written by me all about Blackbeard's Ghost on the free D23 website. Be sure and read "Blackbeard Haunts Again" written by Jim Fanning.
Posted by Jim at 3:27 AM No comments:

Disney References (And Fans) Are Everywhere 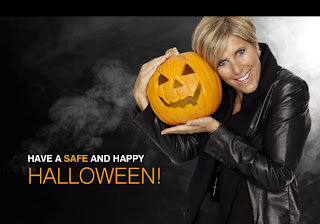 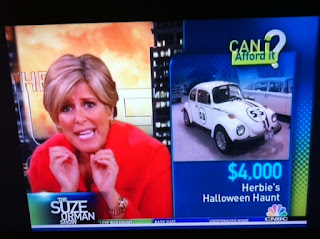 I don't know if you ever watch financial advisor Suze Orman on CNBC. If you do (or if you have seen Kristen Wiig's impersonation on Saturday Night Live)) then you know that she not only gives good financial advice but she's also quite a character. On tonight's Halloween-themed installment of The Suze Orman Show, her "Financial Fright Night" show, a major fan of Disney's Herbie from The Love Bug (1969), called into the show for the "Can I Afford It?" segment to see if had enough money to throw a $4000 Herbie-themed Halloween party. (Suze thought he could not afford the party and he was "Denied.") Just goes to show there are Disney references—and Disney fans of one kind or another—everywhere.
Posted by Jim at 2:53 AM No comments: 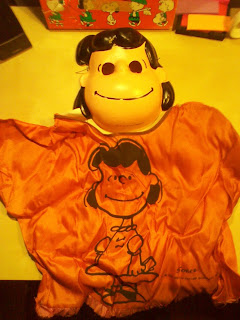 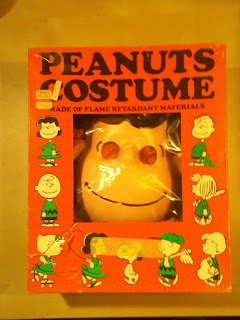 Here's a fun Halloween item: you can be the queen of crabbiness herself, Lucy Van Pelt, with this Peanuts Costume, created by the Peanuts licensee supreme, Determined Products. Released in the 1970s, this perfect-for-Great-Pumpkin watching (or scorning) outfit originally cost $3.18 according to the price tag from Rinks department store (which was apparently in Ohio) on the suitably pumpkin-orange box. (Also available: Charlie Brown and Snoopy costumes....but no Linus. Linus is of course waiting in the sincere pumpkin patch, waiting for the Great Pumpkin.)
Posted by Jim at 4:07 AM 2 comments: 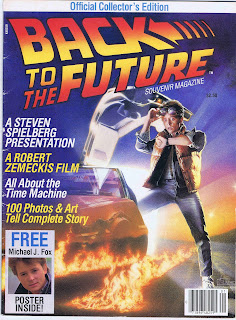 ...was the date in Back To The Future (1985) on which Marty McFly (Michael J. Fox) accidently time-travelled to 1955. In honor of that date's anniversary (and since I completely missed all the fun of the Back to the Future 25th anniversary last year) here's the cover from the 1985 souvenir magazines. The cover art—painted by poster-ace Drew Struzan—is one of the most recognizable (and best) movie posters ever. I have a great affection for movie programs and souvenir magazine and I'll be posting more of them here at Tulgey Wood, and I hope you enjoy them as much as I do.
Posted by Jim at 5:31 AM No comments: 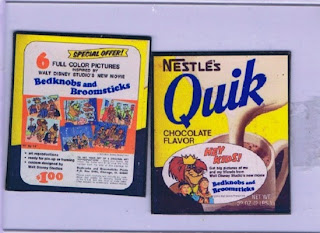 Yesterday I posted about the 1971 Walt Disney World sweepstakes sponsored by Nestle's Quik to celebrate the opening of Bedknobs and Broomsticks. Today, here's the accompanying premium offer (seen on the front and back of the Quik package) of six "full color frameable art prints" based on the film's animated segment. 25 million one pound-and two pound cans of Quik carried the offer. Wonder how many sets of these "custom desgined by Walt Disney Studios" prints were given away? Interestingly, the art works shown on the cans were apparently prototypes, as the prints themselves were more "finished" and painterly than the more cartoony art shown on the packages. I acually prefer the style shown on the cans, but who's complaining? The Bedknobs and Broomsticks prints were free.
Posted by Jim at 4:54 AM 2 comments: 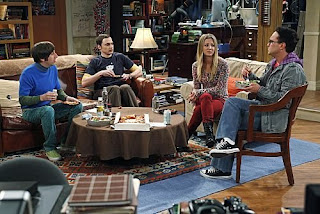 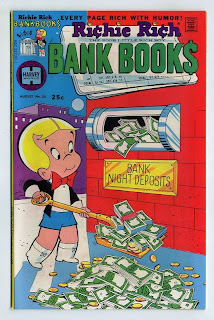 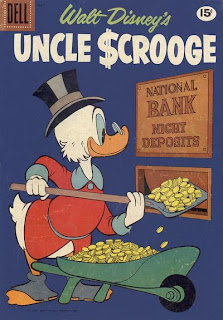 There seems to be at least one reference to Disney in every episode of The Big Bang Theory, and tonight's installment was no exception. Since the Big Bang guys are all comic fans it seemed inevitable that a Disney comic book reference would pop up sooner or later, and tonight's was a good one. In this episode entitled "The Wiggly Finger Catalyst," Sheldon used the often-discussed question of whose fortune is larger, Richie Rich's or Uncle Scrooge's, to describe Raj's wealth. (The answer is, needless to say, Uncle Scrooge.) Sheldon simply explained that Raj's family is "Richie Rich rich" or "about halfway between Bruce Wayne and Scrooge McDuck.' Leave it to Dr. Sheldon Cooper to put it all in perspective in such a colorful comic-centric manner—a way which even the non-geniuses among us can understand. (and in case you are wondering, the Uncle Scrooge cover pictured here was published in 1961, and the Richie Rich cover was issued in 1976. It doesn't take a genius to figure out who stands the tallest between these two diminutive financial giants.)
Posted by Jim at 11:34 PM No comments: 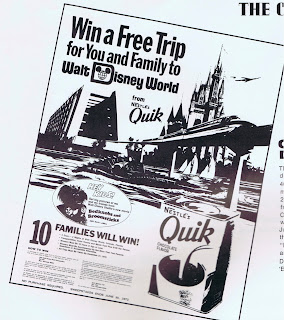 Today marks 40 years since Walt Disney World firs opened its gates in 1971.. and just a few days later, on October 6, 1971, Disney's musical-fantasy film Bedknobs and Broomsticks had its world premiere in London. So it was only natural that one opening was used to help promote the other, and vice versa. As you can see from this image from the Bedknobs pressbook, Nestle's Quik sponsored a tie-in sweepstakes with a prize of a free trip to the newly opened Vacation Kingdom—all to promote Disney's lavish new film. 10 families won the grand prize (the Quik sweepstakes was promoted in more than 25,000 supermarkets throughout the U.S.) of 3 days-2 nights at Walt Disney World, plus transportation and meals for the winners (it was required they be 18 years or less, as this promotion was aimed at children, or "Hey Kids!" as the Quik can front had it) and two parents or guardians. Did anyone reading this win one of these trips? If so let's hear from you so you can tell us about your experiences.
Posted by Jim at 3:25 AM No comments: