Now Playing, Turner Classic Movies' monthly programming guide, showcases the annual Summer Under the Stars film festival in its August 2016 issue. And this mini-mag (below) does it in style with a rare color photo of beauteous Lucille Ball from her MGM days. In case you aren't aware, TCM offers a glorious flick fest of faves each August, saluting one movie great each day throughout the month. It kicks off tomorrow with Edward G. Robinson (see?), followed by Lucy (waahhhh! or AHHHHH!)  on August 2, Bing Crosby (boo-boo-boo) on August 3 and so on. This Hollywood extravaganza spotlights everyone from such giants as Bette Davis, Humphrey Bogart, Spencer Tracy and Montgomery Clift,  to more eclectic but still superb stars as Fay Wray, Boris Karloff, Ralph Richardson and Angie Dickinson. Starting tomorrow, tune into TCM and spend your summer with their stars. 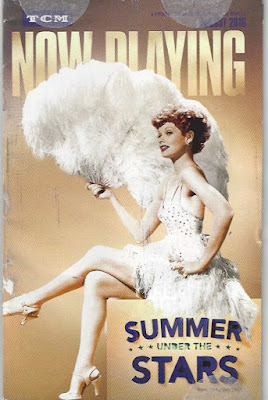 What Kind Of Kid Loves A Johnny Tremain Premium

It must have seemed a natural for Armour Hot Dogs to offer a premium to tie-in with the release of Walt Disney's Johnny Tremain (1957). The Revolutionary War-themed drama was released, appropriately enough, in July, on the 27th to be exact. So the specially marked packages of Armour Hot Dogs were on the grocers' shelves in plenty of time for the Fourth of July, one of the biggest days of the year for hot-dog consumption in the US. The premium offered along with the hot dogs? A "silver" (actually plastic) coin based on a prop in the film: the badge worn as a pendant by the Sons of Liberty, complete with an engraved image of the Liberty Tree. In the words of Walt Disney himself: "Medallions like this were the secret identification badge of the Sons of Liberty. They were called Liberty Tree Medals, after the famous elm tree which stood in the heart of Boston." On the reverse of the giveaway coin: one of the characters or scenes from Johnny Tremain, including the Boston Tea Party, patriot and silversmith Paul Revere on his Midnight Ride, lead female character Priscilla Lapham and of course, silversmith apprentice Johnny Tremain himself. The full set of six Liberty Tree Medals undoubtedly sold a lot of hot dogs as Johnny's fans sought to collect all six "silver" coins. Whether you eat any hot dogs today or have the vegan tofu variety, or something else entirely, Happy Independence Day 2016! 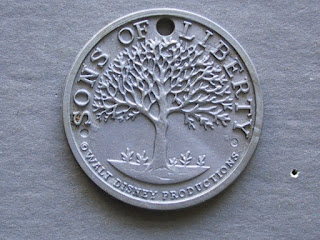 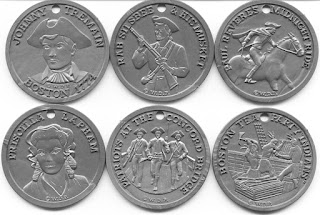 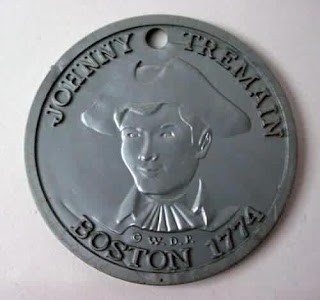 When Eric Stolz was replaced by Michael J. Fox as Marty McFly after five weeks of filming Back to the Future, the release date was changed from June 21, 1985, to July 19 to give the production an additional month of time since much of those five weeks of filming had to be reshot. The July 19 release date held for quite some time as evidenced by the  promotional pinback button shown below. However, as Universal became more and more aware that this science fantasy was something very special it was decided that the film should be released on July 3, 1985 (a Wednesday), so as to be in theaters for one of the year's biggest moviegoing days, July 4. So the second button seen below was issued with the new release date. Talk about time travel! Happy 31st anniversary to Back to the Future, released on this date, July 3rd, in 1985. 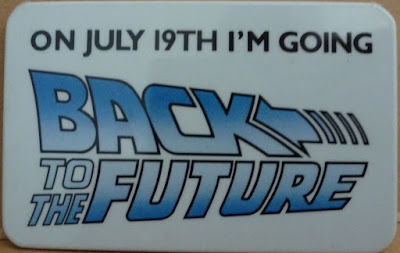 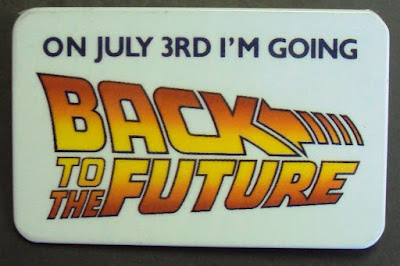 As mentioned in this post, Johnny Tremain was featured in Walt Disney's Mickey Mouse Club Magazine. The Fall 1956 issue include a brief adaptation of certain events in the original book by Esther Forbes. What is perhaps of greatest interest to Disney fans are the illustrations, drawn by the legendary Herb Ryman. Interestingly the introduction states that the Johnny Tremain book ("although first published in 1943, [it] has already achieved high acclaim as a junior classic") is currently being filmed for television, and that's true. The Disney version was still intended for the Disneyland TV show on October 19, 1956, the day that production ended, and it wasn't until October 24 that it was decided to release the Revolutionary War-set story to theaters. Since we can assume that this magazine story was prepared well in advance of the cover date of the magazine (it was probably published in summer), perhaps Herb's excellent art was drawn before filming began (on September 5, 1956) or even before casting was completed. (Disney purchased the screen rights to the book in March 1955.)  It's one thing that Johnny and Cilia look so different than their screen counterparts, but it's another matter entirely that Mr. Johnathan Lyte looks completely different from the portly Sebastian Cabot, who portrayed him on screen. Johnny Tremain was released on July 10, 1957. Hope these classic illustrations by a classic Disney artist enhance your Independence Day celebration. 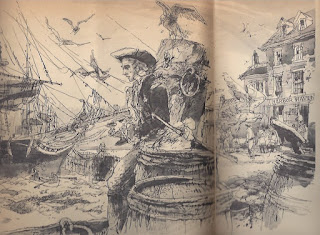 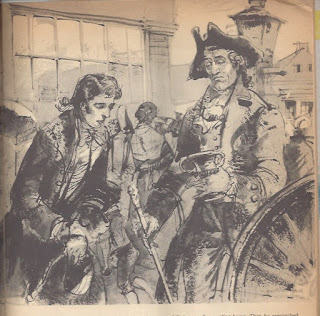 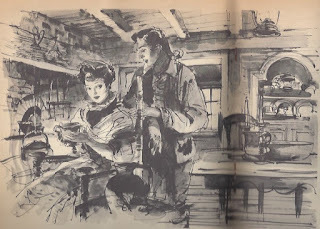 Snoopy, A Star Of A Different Stripe

Happy July! To get things started for our Independence Day celebration here's Snoopy, in one of the best of the fine Peanuts Colorforms sets produced in the 1970s. This "Colorforms Theatre" set was released in 1976, so the patriotic designs were incorporated to tie in with the mammoth U.S Bicentennial commemoration. Though you can't tell from the cover pictured here, Charlie Brown's stick-on costume is George Washington. Inside, the theatre set features other members of the Peanuts group as audience members. (If you're a Franklin fan, he's there, along with Peppermint Patty, Marcie and others.) As the Colorforms company put it, you could "create your own Bicentennial spectacular!" Forget fireworks—this is real Fourth of July fun, and best of all, it's quiet so it won't scare your own personal Snoopy. 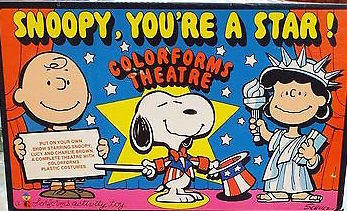