The Lord Is Good To Me 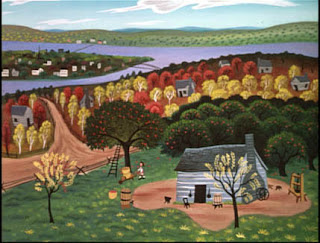 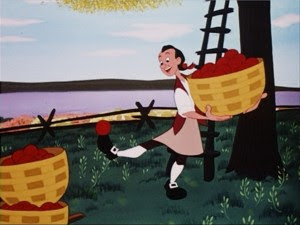 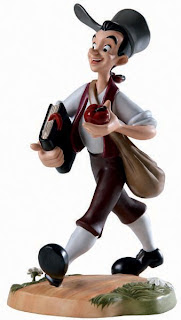 With the Fourth of July fast approaching it seemed like a good time to turn our attention to an all-American subject—and what's more as-American-as-apple-pie than Johnny Appleseed, as brought to animated life in Walt Disney's animated anthology Melody Time (1948)? Little Johnny has always been one of my favorites, his animated legend told in delightful song (vocalized by the versatile Dennis Day, who provides all the short's voices, including Johnny Appleseed himself) and Mary Blair-style, with animation by greats such as Ollie Johnston and Milt Kahl. Now the Walt Disney Classics Collection has brought this memorable-but-still-somewhat-obscure Disney animated character to the forefront of our flag-waving consciousness with a superbly crafted sculpture, marking a return of the Walt Disney Collectors Society's star-spangled American Folk Heroes series. To celebrate both July and Johnny, I'll be posting about the sculpture and the character throughout the days ahead. In the meantime, if you want to get this great Johnny Appleseed for yourself, it's available only through March 31, 2009, and is available only to Members of the Walt Disney Collectors Society. See here for more information about becoming a Society Member.
Posted by Jim at 11:46 PM 4 comments:

Put On Your Sunday Clothes And See Wall•E 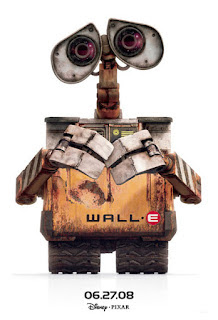 What on earth or in the universe does Hello, Dolly! (1969) have to do with the new Disney•Pixar computer animated film, Wall•E? You’ll just have to wait until you see the out-of-this-world movie to find out, and I strongly recommend you catch this comical, compelling film as soon as possible. With the film opening tomorrow (Friday, June 27) there are plenty of reviews and reports around to clue you into Wall•E details major and minor, but the best way to see this unpredictable film is to know as little as possible about it. Thanks to the good graces of sterling Disney exec, brilliant writer/historian and all-around good guy Howard Green, I attended a pre-release screening of the new Pixar triumph Tuesday night at the historic El Captain in Hollywood with good friends Ed Squair (the Disney Photo Library master who invited me to the screening in the first place) and Debbie Garcia. It would be inaccurate, however, to describe this funny, touching and fascinating film as a “typical” Pixar production, or as a “typical” anything. From its unusual characters (starting with the endearingly Chaplinesque title robot) to its extraordinary and utterly engaging plotting, pacing and storytelling, Wall•E is a completely unique film. For me, one of the movie’s best aspects is the absence of huge “star” voices. Indeed, as has been reported elsewhere, about the first half of the film basically has no dialogue. Ironically after the screening we ran into a true vocal star: Disney Legend—make that Disney royalty—Kathryn Beaumont, who you know and love as the voice of the title character in Alice in Wonderland and the voice of Wendy in Peter Pan. It was truly Kathy in Wonderland (or is that Wall•E-land?) all over again, for the ever-gracious Ms. Beaumont shared with me she found the film engrossing and thought-provoking, commenting not just on the expert animation but on the brilliant storytelling. Kathy specifically noted that the movie not only held one in rapt attention throughout but also lingered in the mind and imagination. What better recommendation could there be than Kathy Beaumont—the voice artist at the heart of two of Walt Disney’s most outrageously imaginative animated lands— saying that this new animated film takes viewers on an unparalleled journey of creativity, emotion and, yes, intelligence. So zoom over to your local movie house to catch this unique film—it only takes a moment to see Wall•E. Well, actually it takes 97 minutes, but every last one of them is (dare I say it?) magical.
Posted by Jim at 11:57 PM No comments: 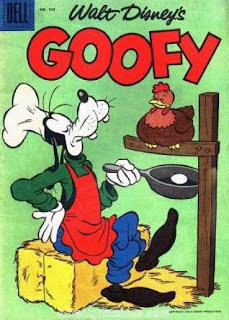 Things have gotten pretty goofy around here lately so the best cure is... more Goofy! Here he is on the cover of his very own comic book from November 1956 (four Color 747), drawn by the great Paul Murry. Paul drew gobs of Goofy over the years as the good-natured "dawg" was a frequent co-star of the many Mickey Mouse stories graphically essayed by the artist. Paul had his own delightful take on Goofy, for one thing making the silly cartoon star more bottom-heavy than the skinny model we are used to. Enjoy this prime example of Paul Murry's great version of Goofy.
Posted by Jim at 1:58 AM No comments:

Let The Goofy Games Begin (Actually, They Have) 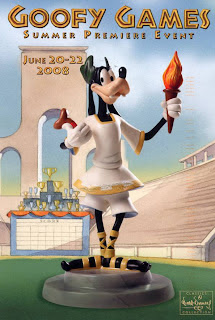 Right now, the Walt Disney Classics Collection is having a special event centered around the new and hilariously crafted Goofy sculpture, shown here and on the cover of the new issue of Sketches, seen here. The Goofy Games event is happening this weekend (right now, in other words), June 20-22, 2008 at participating dealers. For a list of Walt Disney Classics Collection dealers visit here.
Posted by Jim at 1:23 AM No comments:

Hot Off The Presses: A New Issue Of Sketches Magazine 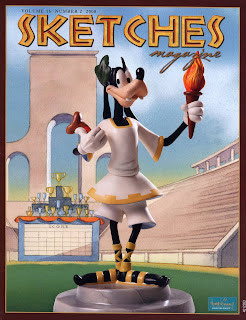 Mickey and Minnie Welcome You To Disneyland 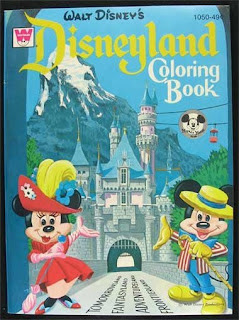 With the coming of summer, the most heavily attended season of the year at Disneyland, here comes a wonderful piece of Park-related art. There have been many coloring books centering on Disneyland published since 1955 but the delightful cover pictured here has always been one of my favorites. The interior drawings are by Golden/Whitman/Western/Dell comics favorite Frank McSavage so I assume this painted cover was penciled by him. Originally published in 1961 (this edition is a reprint from the mid 1970s, judging by the stylized Whitman logo the publishing imprint adopted in the late 1960s and the classic Mickey Mouse Club logo from the second round of local-channel syndication in 1975-1977), the cover mentions the four original lands, with New Orleans Square, Bear Country and Mickey’s Toontown still in the future. And what of Main Street, USA? Mr. Mouse and his Miss represent that nostalgic realm, charmingly dressed as they are in Sunday-best turn-of-the-century (and you know which century) costumes. Looking as happy and proud as they ever have in this slightly stylized portraiture, Mickey and Minnie are wonderfully portrayed in a very appropriate role, welcoming one and all to Walt Disney’s Magic Kingdom.
Posted by Jim at 11:51 PM 1 comment: