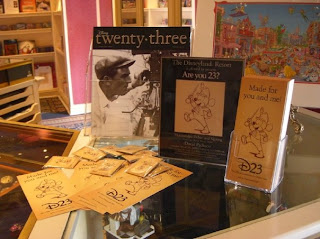 Thanks to friend and fellow Ludwig Von Drake fan Steven Vagnini (and author of a history of the Walt Disney World Resort's Hollywood Studios park at the D23 website) here's a photo of the D23 display at the Disneyana shop on Main Street, USA at Disneyland. As you can see, Issue No. 1 of Disney twenty-three magazine is prominently displayed, right at home at Walt Disney's Magic Kingdom. If you see Issue #1 at a Disney Theme Park, Disney Store or at Barnes & Noble, you may want to snap it up. This instant collector's item will soon be off the shelves to make room for Issue # 2—which I've seen and looks great. Word is that Issue # 2 is already being mailed to D23 members, so this is a great time to become a member of D23, the Official Community for Disney enthusiasts—we are already at work on Issue # 3. For more information visit D23.
Posted by Jim at 10:49 PM No comments:

Big Bang Hits It Big At The PaleyFest 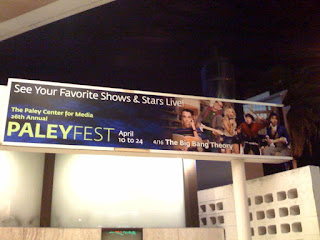 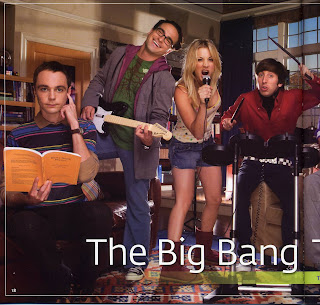 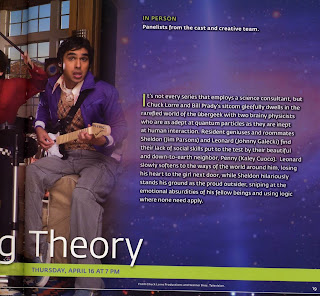 On April 16, I had the pleasure of attending the Big Bang Theory salute, part of the 2009 PaleyFest, put on by the William S. Paley Media Center at the famed Cinerama Dome on Sunset Blvd. in Hollywood. In attendance was the cast of this great CBS show as well as its creators Chuck Lorre and Bill Prady. The cast and creators told many amusing and informative behind-the-scenes anecdotes before taking some unusually excellent questions from the audience (what can I say? This smart comedy attracts intelligent and discerning viewers) before graciously hanging around to sign autographs. I attempted to get the signature of Jim Parsons (who plays super-smart and at-times scary Sheldon) but wasn't able to succeed (seems I lack The Reach) but there is apparently photographic evidence of me shyly doing my best to make my way through the mob, although Jim happily signed posters, programs and all manner of memorabilia before he was whisked away by PaleyFest handlers. Nevertheless, a good time was had by all, especially as an as-yet unaired episode was screened. Entitled "The Vegas Renormalization," this episode—airing tomorrow, Monday, April 27, on CBS—is a primo example of how funny, smart and character-driven The Big Bang Theory is on a weekly basis. I promise you, if you are a fan of this show, you will love this episode (and you will enjoy Penny's encore performance of "Soft Kitty"), and if you have never seen the show, you will love it too, so tune in. William S. Paley himself would be proud of this worthy CBS comedy.
Posted by Jim at 8:14 PM No comments:

In celebration of Earth Day, that is today, April 22, the D23 website has posted "True to Life," an article written by me celebrating Walt Disney's True-Life Adventures. Winner of eight Oscars (an incredible number considering there were only 13 True-Life Adventures shorts and features), this magnificent nature documentary series virtually created the genre through its glorious photography of the natural world around us. Check out the wonderful color photo of Al and Elma Millotte, Walt's first True-Life photographers, on the homepage. (If you don't see this photo, click on the Mouse icons until you do.) It's also here you will see my credit ("Disney expert Jim Fanning takes a look back at Walt Disney's unforgettable True-Life Adventures series.") Then click on the photo itself to read the article. In the meantime, here's the poster for one of the best of the True-Life Adventure features, The Vanishing Prairie (1954). But do remember to visit the D23 website—it's updated with great Disney material every day.
Posted by Jim at 9:25 PM No comments:

The Disney (Music) Touch At The Fair 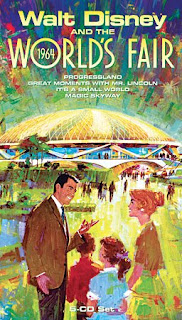 Today, April 21, marks the anniversary of the 1964-1965 New York World's Fair, which of course included four spectacular shows created by Walt Disney and his Imagineers. There could be no better day than today (except perhaps April 18) to recommend the newly released Walt Disney Records CD box set, Walt Disney and the 1964 World's Fair. This 5-CD set (that's right, five CDs) includes a 24-page full color booklet, written by Disney historian Stacia Martin (this book alone is worth the purchase price) and more than three hours of recordings from Walt's classic attractions. Including rarely-heard musical gems from Buddy Baker, George Bruns and other maestros of Disney music, this must-have musical treat was made possible through the talents of such Disney good guys as Tony Baxter, Jeff Kurtti, Randy Thornton, Hugh Chitwood, Alexander Rannie, among others. Best of all, this fantastic can't-believe-this-even-exists CD set is dedicated to friend and inspiration Bruce Gordon (whose "baby" this was) with these words: "Dedicated to the spirit and memory of our dear friend Bruce Gordon April 18, 1951—November 6, 2007. His devotion, passion, intelligence and humor informed and delighted millions of Disney fans the world over." You can learn more about Walt Disney and the 1964 World's Fair by reading this interview with producer and classic Disney music guru Randy Thornton.
Posted by Jim at 11:41 PM 2 comments: 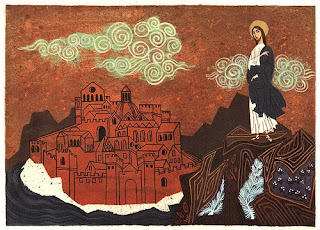 In honor of Easter Sunday 2009 here's a wonderful bit of art from The Golden Bible: The New Testament by Alice and Martin Provenson. Enjoy--and Happy Easter.
Posted by Jim at 9:47 PM No comments:

Anything (And Everything) Alice 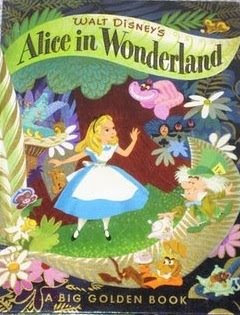 We naturally have a special place in our heart here at Tulgey Wood for Walt Disney's Alice in Wonderland, and so Matt's blog all about vintage Wonderland collectables is a favorite World Wide Web stop for us. Be sure and visit there often for all kinds of Alice wonders. In the meantime, here's the cover of the great Alice in Wonderland Big Golden Book, featuring classic art by Disney artist Al Dempster.
Posted by Jim at 4:07 AM No comments: 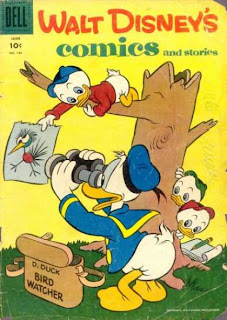 As has been reported widely across the Web, Gemstone Publishing has stopped publishing its line of Disney comics. This is especially sad as Disney's long-running flagship title Walt Disney's Comics and Stories was fast approaching its 700th issue, with Gemstone having stopped with issue 698. At least the next several issues were prepared, however, and some future issues are still listed on Amazon.com as available for pre-order. This perhaps bears out Gemstone's Steve Geppi's recent assertion that the Disney Comics will most likely continue in some form. Let's hope that includes issue 700 and beyond. In the meantime here's the April Fool-ish cover for issue 189, June 1956, drawn by Disney comic great Paul Murry, of Walt Disney's Comics and Stories.
Posted by Jim at 11:46 PM No comments: