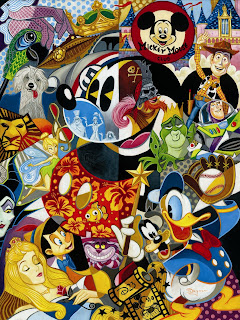 The D23 Expo (September 10-13) is shaping up to be a spectacular celebration of all things Disney. The many events planned for this mega-event have been announced, and the many Disney greats who will be on hand—everyone from Mary Costa, Kathryn Beaumont, Tommy Kirk and X Atencio to Bob Iger, John Lasseter, John Musker and Ron Clements—have been signed up. Also just "leaked" is another mysterious "D23 Expo Uncovered" video featuring D23 staffers Jeffrey and Carmen, as well as actor, collector and all-around good guy Dan Roebuck. Check out this underground D23 Expo glimpse, but before you do, take a few moments to visually explore the official art of the D23 Expo created by artist Tim Rogerson featuring more than two dozen individual characters, props and historic Disney icons.
Posted by Jim at 2:03 AM 2 comments:

Angela All Day On TCM 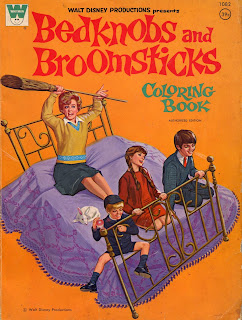 Much merchandise was created for the original 1971 release of Bedknobs and Broomsticks, including this coloring book featuring a fine painting of the children, the rabbit, the glowing magic bedknob (bed attached) and Angela Lansbury as Miss Price. Today, Ms. Lansbury is the subject of Turner Classic Movie's monthlong Summer of Stars, spotlighting a particular star each day of August. In addition to such fascinating Lansbury films as All Fall Down and The Manchurian Candidate, TCM will be presenting Bedknobs and Broomsticks at 6:00 pm EST/3:00 pm PST—and watch this space for news of an in-depth behind-the-scenes article by me about Bedknobs and Broomsticks.
Posted by Jim at 2:13 AM No comments:

Hot Off The Presses: A New Issue Of Sketches Magazine 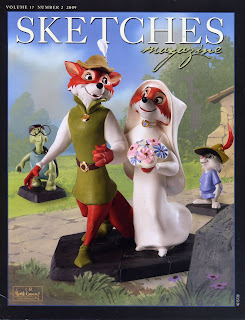 Here's the cover of the latest issue of Sketches, the Official Magazine of the Walt Disney Collectors Society. Just received by Society Members, this issue contains articles about The Jungle Book (by famed Disney artist, writer and historian Kevin Kidney), Runaway Brain, and a cover story about the rarely-portrayed wedding of Robin Hood and Maid Marian. There are also two articles written by me covering the classic Carl Barks comic book story "The Sheriff of Bullet Valley" and Johnny Tremain. Sketches is only available to Members of the Walt Disney Collectors Society. For information on becoming a Society Member please go here.
Posted by Jim at 11:56 PM 1 comment: 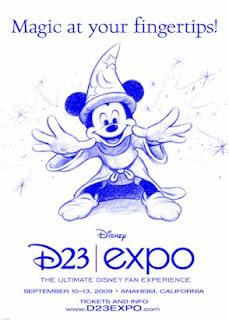 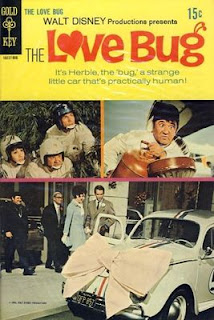 Excitement is growing for the D23 Expo, to be held in Anaheim September 10-13, 2009—that means it's just a scant few weeks away! Just today, the Walt Disney Studios released details of its participation, and the events include sneak peeks at upcoming releases (The Princess and the Frog, Rapunzel and the new Tron among them), plus special Fabulous at 50 anniversary screenings of three of Walt Disney's 1959 classics: The Shaggy Dog, Darby O'Gill and the Little People and Sleeping Beauty. To further up the anticipation some particularly sneaky D23 staffers have stealthily infiltrated the secret warehouse of the Walt Disney Archives in order to give an indication of some of the treasures to be seen at the D23 Expo. And although disney twenty-three magazine's editor-in-chief Carmen Esquer and marketing manager Jeffrey Epstein are both lovely to look at (the D23 staff is the best-looking anywhere), I think you'll agree no one is more shinily attractive than ol' 53 himself, Herbie the lovable Love Bug. Enjoy this comic book cover of the 1969 comic adaptation of Disney's mega-hit The Love Bug shown at the right (celebrating its 40th anniversary this year, by the way), but also be sure and check out this mysterious underground D23 Expo footage here.
Posted by Jim at 9:30 PM No comments: