Founded in 1923, The Walt Disney Company celebrated its Golden Anniversary in 1973 (when it was called Walt Disney Productions) in a big way, and one of the happiest elements of its 50 Happy Years campaign was the logo created especially for the occasion. Seen on everything from movie ads and record albums to comic books and View Master sets, this delightful logo is now seen on my blog, for all to enjoy. Why run it now, you ask? Well, today is the first anniversary of Tulgey Wood, and since I don't have a logo for this momentous anniversary I thought I would appropriate (as usual) Disney art, while at the same time give you a chance to enjoy it. It's been a fun (and yes, Happy) year here at Tulgey Wood and though I've covered some subjects I wanted to—"Disneyland Showtime" and The Hallmark Hall of Fame, to name two—there's much more I haven't yet gotten to. So stay tuned for the next Happy Year. There's plenty more madness to come here at Tulgey Wood.
Posted by Jim at 11:52 PM 4 comments:

Big Bang Is Back In Business 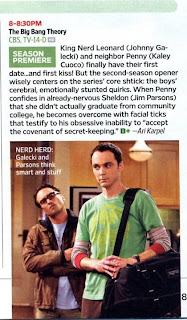 Faithful readers of this blog (far more faithful are they than the blogger himself) know of my fondness for the CBS comedy, The Big Bang Theory. Well, the big, bang-up news is this wittily written, sharply acted series returns tonight with new episodes. CBS has certainly stood behind the show—throughout the writer’s strike and then throughout the summer, the Tiffany Network (as CBS used to be known when it was the classiest—and most successful—of the networks) ran the show almost every single Monday, endlessly rerunning the 17 episodes produced when the writer’s strike prevented a full 22 episode season from being completed. I’m sure one reason the network has stood behind this modestly-rated series is that it appeals to the elusive younger demographic the networks find so desirable, but I also like to think it’s because the show is so darn good. I’ve posted Entertainment Weekly’s review of the show’s second season return here, but you'll want to catch the actual return of Geek chic to tonight on CBS.
Posted by Jim at 12:43 PM 2 comments:

My Heart Is An Island 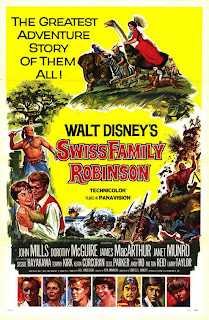 I was recently in Atlanta and would loved to have "dropped by" Turner Classic Movies headquarters to commend them for showcasing Disney films uncut and in their original aspect ratios (not to mention the many other classic films they also present every day, all day). Today TCM is screening for the first time Walt Disney's adventure epic Swiss Family Robinson (1960), filmed in Panavision (and as TCM is presenting the film letterboxed you will see every glorious bit of its widescreen splendor). Disney spent a bundle on this spectacular film (it remained the studio's highest-budgeted film until Bedknobs and Broomsticks which was flmed in 1970 for a 1971 release) and it shows in its lush location filming. When I was researching the film for the deluxe "Vault Disney" 2-disc DVD, I came across letters from the director Ken Annakin in which he detailed his search for three young British actors to play the Robinson sons. After much casting about he reported that he had found three very talented actors who would be perfect for the roles. This was followed by a reply memo from producer Bill Anderson thanking the director for his efforts but that Walt said James MacArthur, Tommy Kirk and Kevin Corcoran were to play the three Robinson boys. Nice try, Ken! Those tried-and-true Disney faves do a fine job in the film, however, especially James and Tommy, who always turn in terrific performances in all of their Disney films. (Kevin is as always "Moochie," but we love that little guy "filled with dynamite who keeps you in a state of fright" too!) And of course the presence of those three Disney stalwarts give the film a Disney flavor, which is undoubtedly what Walt wanted. If you have not experienced the Swiss Family Robinson DVD, it's well worth tracking down, as it's jam-paced with extras, including fun and compelling commentary and on-camera interviews (in the excellent making-of documentary, newly produced for the DVD) from Messrs MacArthur, Kirk and Corcoran. In the meantime, catch Walt Disney's Swiss Family Robinson on TCM today at 5:00 pm (Pacific time).
Posted by Jim at 1:56 AM No comments: