Having a Christmas party with Yogi Bear and his Hanna-Barbera friends is the appealing idea behind this masterful painting found on the cover of a 1961 coloring book. Those that celebrate the traditional 12 Days of Christmas (today is Day Three) know that a Christmas part need not take place in the days preceding December 25th. Holiday gifts can be given and parties can be thrown throughout the Christmas season that doesn't end until January 6th (the traditional "12th Day of Christmas"). 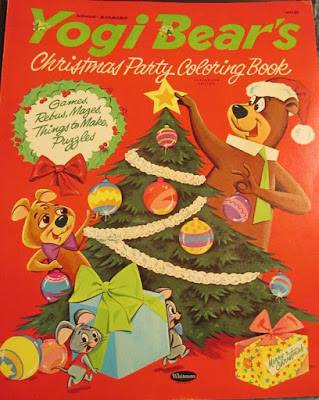 There have been some odd Christmas albums issued over the years, to say the least. Here's a selection of them. Look—and listen—at your own risk. (although some of these are actually quite good.) 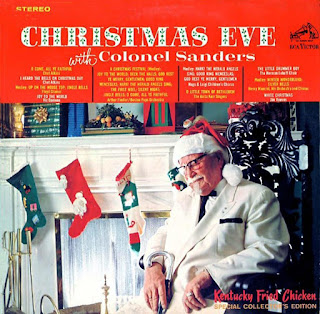 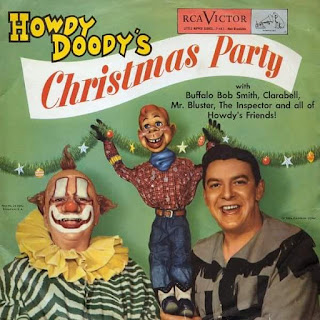 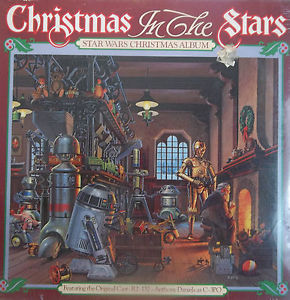 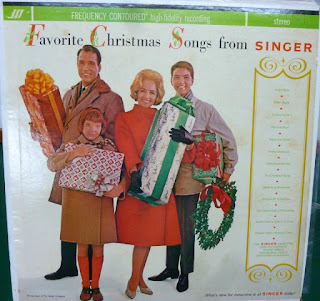 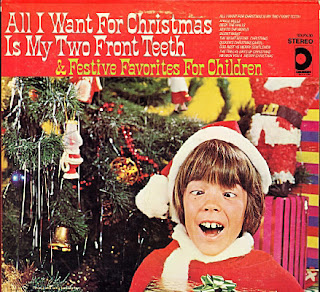 Festivities With Figaro (And Pinocchio. And Jiminy Cricket)

What feels more festive on Christmas Day that this merrily evocative artwork? Another Christmas creation by Disney artist Russell Schroder, this Pinocchio at Christmas (perhaps the tree is one of Pinocchio's distant relatives?) art was published as the cover of the Eyes & Ears newsletter (for Walt Disney World cast members) on December 22, 1978. (By no coincidence at all, Walt Disney's Pinocchio was re-released to theaters that holiday season.) 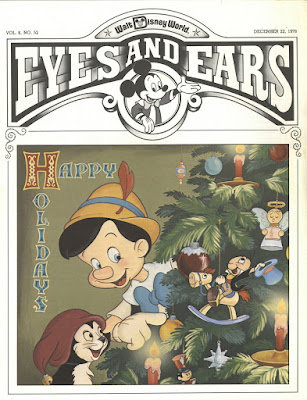 Merry Christmas To All 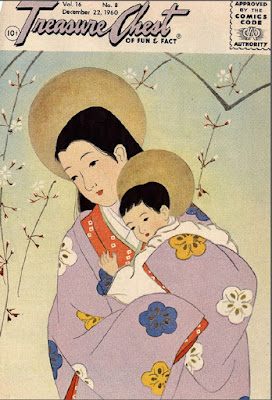 This artwork from the cover of the December 22, 1960 issue of the Treasure Chest of Fun and Fact comic book brings to mind the 1951 carol, "Some Children See Him," composed by Wihla Hutson and Alfred Burt:

Christmas blessings to all.

Welcome To A Christmas Wonderland

Though it may seem a little more mad than merry, this classic piece of art, from the December 25, 1986 issue of Eyes & Ears, the in-house publication for Walt Disney World is a delightful way to usher in Christmas Eve. The art was specially created by friend and Disney artist/historian Russell Schroeder and was published as the cover for both Eyes & Ears and the Studio newsletter, Disney Newsreel. In fact, according to Alice expert Matt Crandell (don't miss his Wonderland blog) his piece was originally published in the Newsreel in 1984.  Hope this elaborate (dig all the characters, including the elusive Dodo, arriving in the background with holiday gifts) and "wonder"ful art helps you go mad for Christmas. 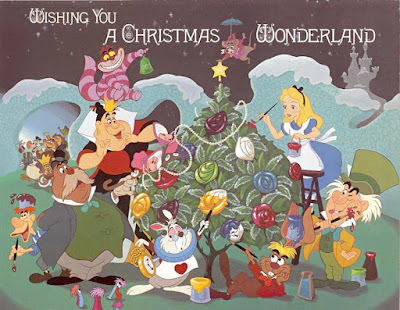 For Some Reason, Archie Is Not Taking This Photo With His Phone

I love comic strips that were published on December 25th...because sometimes they were not published. That means that some newspapers that carried certain strips did not produce an issue for Christmas Day, giving their employees the day off. And that means, therefore, that some readers never saw the 12/25 edition of their favorite strip. The current trend in publishing full runs of classic newspaper strips allows us to see it all, including the rare Christmas editions. This example is a lot of fun, getting the Archie gang (and an unnoticed) visitor together for a very appropriate December 25th gathering and greeting.

2015 is a big year for Peanuts. This year marks the 65th anniversary of the classic comic strip by Charles M. Schulz and the 50th anniversary of the Yuletide TV perennial A Charlie Brown Christmas, and 2015 also saw the release of The Peanuts Movie. No wonder then that this year Macy's chose A Charlie Brown Christmas as the theme for its famous windows at its flagship Herald Square store. 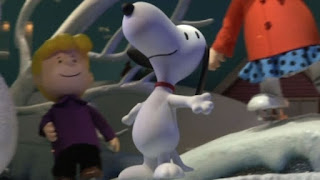 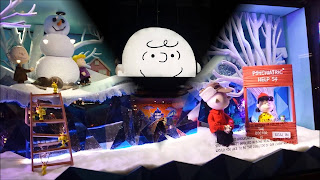 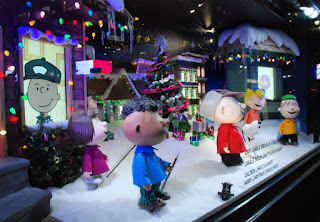 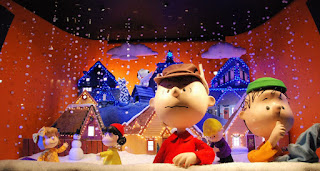 Who better than Toyland's Toymaker, and his friends, the "Babes," to remind us that Christmas is coming? This installment of Walt Disney's Treasury of Classic Tales features Babes in Toyland (1961), drawn in a delightfully cartoony style by Disney artist Joe Hale. Babes in Toyland is always good for some holiday merriment so we're delighted to include it among the Christmas treats and treasures here at Tulgey Wood.

Disney arranged for a tie-in with United Airlines (then the Official Airline of Walt Disney World, now, alas, defunct) for the 1975 reissue of Snow White and the Seven Dwarfs. The re-release was at Christmastime so the print ad was suitably Christmassy, as you can see from this page out of the Snow White pressbook. 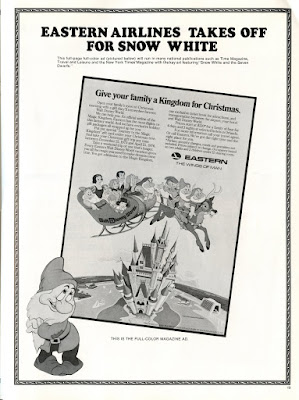 The characters from the Harvey line of comics celebrated more than Halloween. They also celebrated Christmas, as you can see from the examples here.  Even Hot Stuff gets in on the Yuletide act! 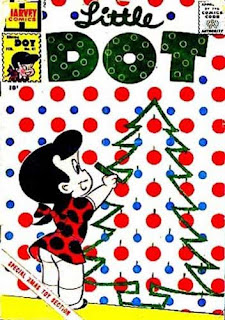 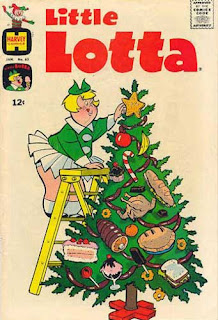 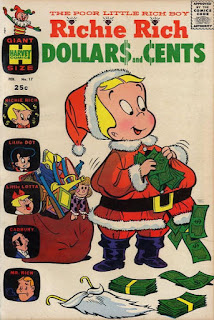 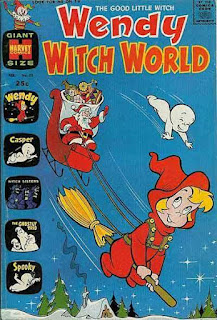 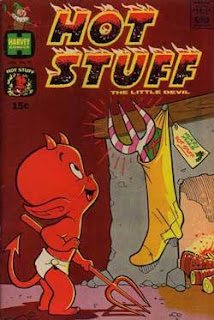 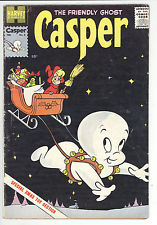 Where's Boston Charlie When You Need Him?

Over the years Walt Kelly drew a multitude of merry Christmas strips for his classic Pogo feature. the great cartoonist reveled in illustrating his lovable characters dancing and singing to Christmas carols. Sometimes, as is appropriate to Pogo, Kelly had his troupe of merrymakers mangle a familiar carol (you can see his most famous example here) but often, as in this example from Christmas 1964, a carol is is simply celebrated.