Time For Some Summer Magic

Here is the cover of the Summer Magic comic book, published by Gold Key in 1963 to coincide with the release of the film. Though the cover boasts a photo of lively Hayley Mills, the interior art is by comic-book legend Russ Manning. To celebrate this "50 and Fabulous" film, D23.com has just posted today a new article written by me all about this Disney live-action classic starring Hayley, Burl Ives and those great Sherman Brothers songs. Check out "The Pink of Perfection: Walt Disney's Summer Magic" by Jim Fanning at D23.com. (This is a Member's only article, but it's easy to become a FREE D23 member at the website.) Minnie Mouse: Our Gal In Hollywood

For a few years early in the run of Walt Disney's Comics and Stories (1941-1944, issues 12-41) there was a text piece (one of the "Stories" mentioned in the publication's titles?) entitled "Hollywood Chatter"—and the byline belonged to none other than Minnie Mouse. This radio show-like report mostly covered news and tantalizing tidbits about Tinseltown's younger set, such as Mickey Rooney, Roddy McDowell (both of whom appeared in Disney live-action productions as adults) and the Our Gang kids, as well as the children of grown-up stars such as the sons of Don Ameche. Interesting that in the 1940s and then in the 1970s, the Disney comics cast Miss Minnie as a Hollywood reporter. The example below is from Walt Disney's Comics and Stories (issue 25, October 25); the header art is attributed to prolific Western Publishing artist Roger Armstrong. 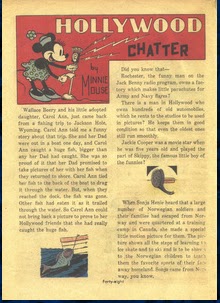 The Lights Of Hollywood

For the past few nights, Hollywood has been wondering why the famous Hollywood sign has been lit for the first time in years.(Surprise: It was for a movie shoot.) It is the 90th anniversary of the iconic sign this year, which hasn't been lit since New Year’s Eve of 1999, when sign was aglow for a Millennial light and fireworks show that caused a major (major even for L.A.) traffic jam. For the story behind the world-famous landmark, let's turn to our gal in Hollywood in a "Minnie Mouse in Hollywood" report from issue 18 (December 1969) of Walt Disney Comics Digest. Come in, Minnie! 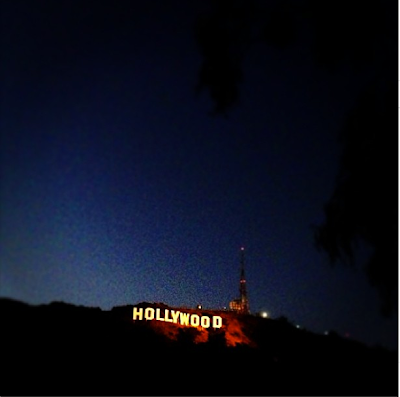 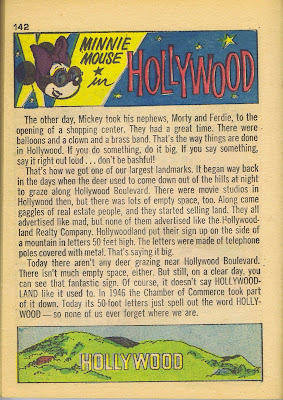 Following up on yesterday's post about Hollywood Mickey, here's a look at Mickey's gal pal turned glam puss in "Minnie Mouse in Hollywood." This charming and informative feature ran in most issues of Walt Disney Comics Digest (published by Gold Key) from Issue # 17 (October 1969) through the final issue, # 57, published in February 1976 (though Minnie's movieland report doesn't actually appear in that final issue). Topics covered included such moviemaking crafts and crafters as Set Designers, Sound Effects, Make Up and Stunt Artists and such Tinsel Town landmarks as Griffith Observatory and the Hollywood Boulvard Walk of Fame, to name but a few. Enjoy this example from Walt Disney Comics Digest (published by Gold Key) from Issue # 45 February 1974. I'll post some more of Minnie's Hollywood reports from time to time. 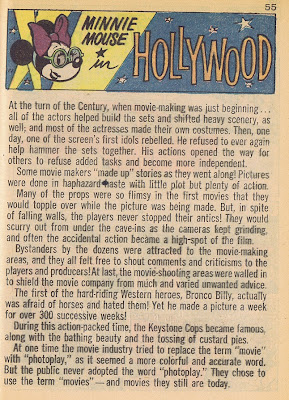 Here are a few examples of toys created for the well-made (and now very collectable) line of toys called Hollywood Mickey. Made by Arco Toys (later purchased by Mattel) in 1989, these delightful toys were produced to tie-in with the opening of Disney's Hollywood Studios (the called Disney-MGM Studios) at Walt Disney World Resort. Dig that awesome Hollywood Mickey logo. John Loter, I bet you were behind that logo (and these toys)! 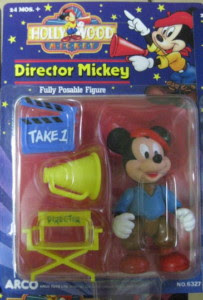 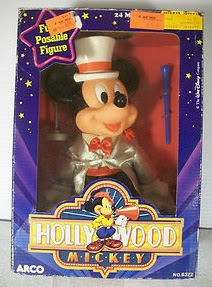 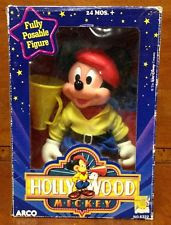 They Were Off To See The Wizard

That all-time classic, The Wizard of Oz, had its world premiere 74 years ago today—on August 15, 1939, to be exact. A deluxe program, the cover of which is seen below, was given out to audience members lucky enough to attend the premiere at  Grauman’s Chinese Theatre in Hollywood. This famed movie palace is about to be renamed the TCL Chinese Theatre IMAX —and the first film it will showcase is—what else?—The Wizard of Oz in 3D, on September 15, to kickoff the film’s 70th anniversary in 2014. 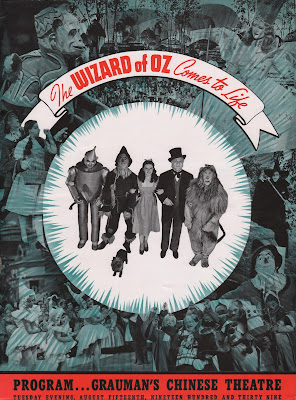