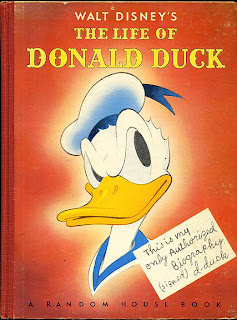 Today being Friday the 13th, it seemed appropriate to say Happy Unbirthday to Donald Duck. As a tribute to the wacky quack's penchant for not so much finding trouble as trouble finding him, the Disney Studios for many years stated (tongue in beak) that Donald's birthday was on Friday the 13th—March 13, in fact. Through the years, the Disney Studio reportedly celebrated their fine feathered film star's whenever that unlucky (if not unducky) Friday rolled around, whether it was in March or not. In 1941, Random House gave Donald the star treatment by publishing a "tell-all" biography, The Life of Donald Duck. Random House's co-founder Bennett Cerf always said he wasn't interested in publishing children's books (he changed his mind in the 1950s when Dr. Seuss created The Cat in the Hat) but of course this wasn't a children's book. This hardcover (complete with dust jacket) volume was created for adults (though child friendly), the main audience for Donald's onscreen antics. As Walt Disney so frequently pointed out his films (and related products) were created for everyone, not just kids. This "authorized" biography continues the conceit that the squawking star was hatched on Friday the 13th. But since we all know Donald's official birthday is June 9, 1934, let's wish our lucky Duck a happy unbirthday today, and hope he he has many more unbirthdays filled with of comedic chaos. And if you would like to read a biography of Donald Duck written by me (as well as the bios of nine other favorite Disney characters, also written by Jim Fanning), check out the D23 website.
Posted by Jim at 5:26 PM No comments: 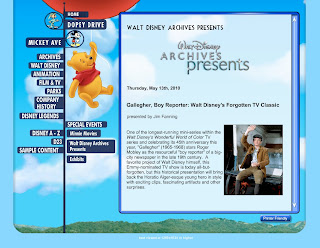 One year ago today, on May 13, 2011, I had the honor of giving a presentation at the Walt Disney Archives on the Disney Studio lot all about Walt Disney's "Gallegher." This was my second talk for the Archives' "The Walt Disney Archives Presents" series of presentations. Above you can see the page (click on the image for a larger view) from the official in-house website of The Walt Disney Studios that promoted the event. Film clips, rare behind-the-scene photos, print ads, newspaper and magazine clippings all helped to tell the unknown saga of the excellent but almost-forgotten TV mini-series. You can read all about it (extra, extra) in the resulting D23 article by Jim Fanning on the D23 website. And watch this blog for even more of the behind-the-scenes story about Walt Disney's "Gallegher" in (I hope) the not-too-distant future.
Posted by Jim at 2:57 PM No comments: 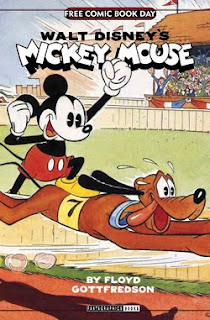 Today is May 7, 2011, Free Comic Book Day, and one of the no-cost-to-you goodies is a Mickey Mouse comic book from Fantagraphics Publishing. Fantagraphics is of course the publisher of many primo comic strip collections, and upcoming is one of the most eagerly awaited: Mickey Mouse by Floyd Gottfredson, Voulme One. The comic-book is a preview of sorts, featuring as it does one of Gottfredson's great Mickey newspaper comic-strip stories, Mickey Mouse and Pluto the Racer (though this 1935 story won't be in Volume One). Check out the preview or better yet visit a comic-book shop today and get a free copy of your own. There's also much more than Mickey—from Archie and the Green Lantern to John Stanley and Darkwing Duck, there's a comic book for everyone, and it's all FREE on Free Comic Book Day. So head on over to your local comics shop (bring a friend or relative, especially a young one who may not have been exposed to the joy of comics) and grab yourself some free Gottfredson.
Posted by Jim at 12:00 AM 1 comment: 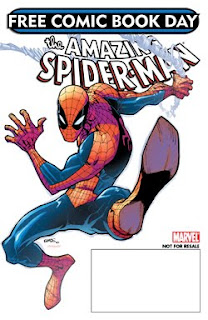 Tomorrow, May 7, 2011, is Free Comic Book Day, and there's an intriguing selection of Free Comics to be had. From all appearances, one of the best promises to be the funnybook starring my favorite superhero, The Amazing Spider-Man. I really enjoy the stylized art of Humberto Ramos—take a look for yourself at this preview. Better yet, head out to your friendly neighborhood comic-book shop tomorrow, preferably bringing a young relative or friend with you, and get this Marvel-ous free comic book for your very own. Free? Of course it's free—tomorrow is Free Comic Book Day! (And by the way there's a spectacular article all about Marvel written by Jason Surrell in the hot-off-the-press Summer 2011 issue of Disney twenty-three, the Official Magazine of D23.)
Posted by Jim at 11:39 PM No comments: