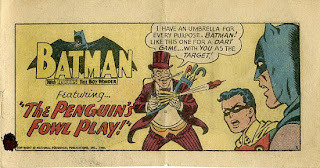 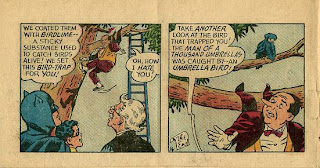 Batman became a TV superstar with the debut of his smash TV show in 1966, but of course the superhero-with-no-superpowers started in comic books—so of all the awesome Bat-memorabilia issued to tie-in with the Bat craze of 1966, what could be cooler than an actual comic book? This Batman mini-comic was a giveaway in Kellogg's then-new Pop-Tarts and was just one of six you could find "in specially marked boxes." Starring that natty nasty the Penguin ("starring" is an apt term as this "special guest villain" appears in this comic story more than Batman and Robin themselves), this now-rare comic was drawn by prolific DC mainstay Curt Swan, who was more closely associated with an entirely different DC superhero (a super man, in fact) than he was with Batman. Here in all its giveaway glory is "The Penguin's Fowl Play."
Posted by Jim at 1:08 AM No comments: 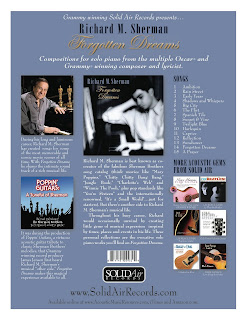 Imagine having Richard Sherman sit down and play a personal piano concert just for you. That sense of intimacy is exactly what you get with Forgotten Dreams, the splendid must-have CD (produced by Grammy Award-winning James Jensen) of haunting piano pieces both composed and played by acclaimed and award-winning composer/lyricist Richard Sherman. If you are a fan of Richard Sherman's music from films, theme parks and TV shows (and who isn't it?) you will love this new recording, a loving collection of 15 pieces Richard has composed as personal reflections, compositions I'm sure he originally wrote for himself and close friends, but that can now be enjoyed by everyone. These intimate musical interludes range from the soulful to the melancholy to the upbeat, each skillfully and expressively played by Richard himself. There's a stylish sophistication to these pieces that are different from the Sherman songs we know so well, though I certainly would not consider any Sherman song lacking in either style or sophistication. (By the way, it is beyond annoying to still encounter people, especially those who should know better, that still insist the Sherman Brothers wrote songs for "kiddie" movies. As anyone who reads this blog surely knows, the Shermans wrote songs for everybody of every age, and no one—least of all Walt Disney—considered the Disney films and other productions to be exclusively or even mainly for "kiddies.") I myself have listened to Forgotten Dreams many times and each time I discover another nuance in between the notes, an additional richness, a new musical emotion. Be sure and add this beautiful musical experience to your musical library—it's available at AcousticMusicResource.com, at Amazon: Forgotten Dreams

, and iTunes. As Poppin' Guitars co-producer Bernadette Bowman has said, the "M" in Richard M. Sherman most definitely stands for magic.
Posted by Jim at 3:22 AM No comments:

Writer, Cartoonist, It's All The Same 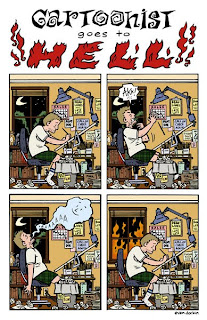 Not much activity here in Tulgey Wood lately, and those ever-present deadlines on other projects are the reason why. This comic-book page (click on the page for a bigger view) written and drawn by first-class comic artist Evan Dorkin explains it all for you. (Change the word "Cartoonist" to "Writer" and you'll get the idea.) Did I say first class? Actually Dorkin, an Eisner Award-winner, is in a class by himself. Check out his stuff at his website and his blog (and be aware that some of his stuff, unlike most of the material recommended here in Tulgey Wood, is not family-friendly) and discover the demented comic genius that is Evan Dorkin. (The comic page seen here is actually the back cover of an issue of Evan's superlative anthology comic Dork!) In the meantime I'll try and get out from under and do some more posting soon.
Posted by Jim at 4:42 AM No comments: