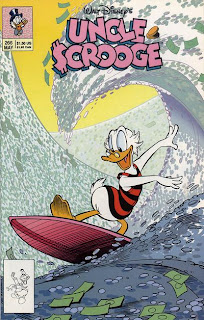 The Uncle Scrooge comic book is again back to being published, and Boom! seems to be doing an even better job of publishing this venerable title (first issued in 1952) than they are the other "classic character" comics such as Mickey Mouse and Walt Disney's Comics and Stories. Of all the many great issues of the Uncle Scrooge comic book published over the years, there's a special place in my heart for issue No. 266 (May 1992). Of all the issues of Uncle Scrooge ever published, why did I pick No 266, you ask? Because good old No. 266 features an Uncle Scrooge story written by me. That's right, I had the great privilege of being published in the same comic book that saw some of the greatest Carl Barks stories—and therefore some of the greatest comic-book stories, period—ever created. So, even though Uncle Scrooge may fondly refer to Old Number One (meaning the first dime he ever earned), I fondly think of Good Old No. 266—the first issue of Uncle Scrooge in which I was ever published. (Stay tuned to Tulgey Wood, for I will post the story itself here in the not-too-distant future.)
Posted by Jim at 8:35 PM 3 comments: