An All New Issue 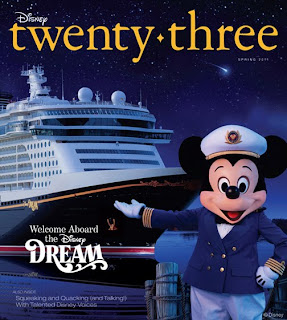 As reported on the D23 website, the new issue of Disney twenty-three magazine will be available on February 1. As usual, this issue will contain a new edition of the "A Walk with Walt" column, written by me. This time around "A Walk with Walt" expands to three pages instead of the usual two. Be sure and check out the Spring 2011 issue of Disney twenty-three when it hits the stands at Borders, Barnes & Noble's, and at DisneyShopping.com, Disneyland and Walt Disney World on 2/1/2011. (If you are a D23 Member you get your own copy in the mail complete with a bonus collectable gift.) Look for it, and check out "A Walk with Walt" column, written by Jim Fanning, in every issue.
Posted by Jim at 3:58 AM No comments:

No Mallets, No Watermelon 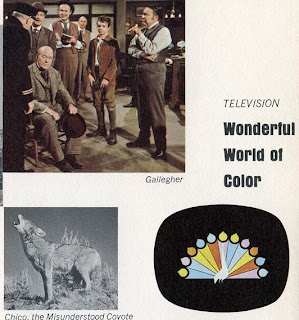 On January 24, 1965—46 years ago today—"Gallegher" made its debut "in living color" on Walt Disney's Wonderful World of Color. This multi-episode comedy-adventure about the go-getting boy reporter was a hit the moment it hit the airwaves in early 1965. The other two episodes of that first batch of "Gallegher"s aired on January 31 and February 7, and led to three more sets of sequels, including the Emmy-nominated "The Further Adventures of Gallegher," which premiered in September 1965. The debut of the nonstop exploits of the copy boy who always followed his newsworthy nose tracking down headlines was in itself big news, as evidenced by Gallegher's prominence in the 1964 Walt Disney Productions Annual Report. As you can see in this detail from the "Television" portion of the 1964 Annual Report (click on the image for a larger view), which touted "Gallegher" as part of the "bright array of stellar programming" resulting from "the public response to more fully developed stories such as last season's three-parter 'The Scarecrow of Romney Marsh.'" Unfortunately the Gallegher photo is flopped, as you can see from the part in star Roger Mobley's hair, which is actually on his left. (Even odder is the flopped image of NBC's trademark peacock. One wonders why it was necessary to have even the very symbol of Disney's then-home network facing the wrong way.) Ready to read more about Walt Disney's "Gallegher" as so ably portrayed by Roger Mobley? Then be sure and check out "Walt Disney's Forgotten TV Classic" at the D23 website (it's free), written by me. P.S. "Gallegher"'s January 24 premiere came just eight days after star Roger Mobley's birthday. Happy belated birthday, Roger!
Posted by Jim at 8:34 PM No comments:

Over at his always interesting Institute of Disney History Paul Anderson has published one of my favorite photos of Walt Disney, featuring Hollywood's most unlikely Studio head aboard a rider mower on the lawn of the Disney Studios in Burbank. The truly intriguing detail about the photo is that Walt's mustache has been drawn in—that is, Walt was sans his signature mustache when the photo was taken and the image was retouched to add the missing under-the-nose appendage. Walt grew his mustache in April 1924 (the photo seen here was taken when Walt was nineteen) as a way to make the twenty-three year old filmmaker seem older and he was rarely seen without it for the rest of his life, so one wonders why Walt was clean-shaven in the photo. Perhaps it was taken after the infamous incident in which legendary Disney artist Ken Anderson accidentally singed the facial hair off while trying to light Walt's cigarette with a faulty lighter. At any rate head over to Paul's blog and see the drawn-in mustache for yourself.
Posted by Jim at 4:55 AM 1 comment:

As regular visitors to Tulgey Wood know I have started a series of posts about that classic comic book Walt Disney's Comics and Stories, as it's celebrating its 70th anniversary (the title's original publication date being October 1940). To read more about this historic comic magazine head on over to the D23 website (remember, it's free) and read the article written by me, covering the imperishable comic book since its earliest years to its current promise to return to the classics. It's all in "Seven Decades of Disney Comic Delights" written by Jim Fanning exclusively for the D23 website.
Posted by Jim at 8:30 PM No comments: 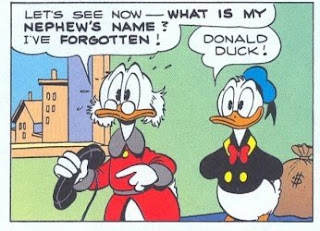 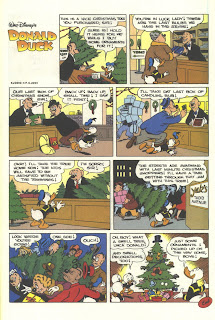 This news has been all over the internet since early this morning but it's worth repeating: After already announcing this past summer plans to publish Floyd Gottfredson's classic Mickey Mouse comic strip in hard cover volumes (the announcement was the news of the 2010 San Diego Comic-Con), that fantastic publisher of comics Fantagraphics got 2011 off to a ducky start by announcing today that they will publish the complete Disney comic-book work of master comics writer/artist Carl Barks. In a very wise move, Fantagraphics will start with Barks' top-of-the-crop work (rather than starting with Barks' still-evolving first stories), with Volume One (to be published this fall) spotlighting some of the epic Donald Duck book-length adventures and Volume Two to showcase Carl's first epic Uncle Scrooge adventures. For more details and an in-depth interview with editor Gary Groth about the Barks project hurry on over to Robot 6. This of course fits right in with my current Walt Disney's Comics and Stories postings, the past and future home of Carl Barks' Donald comic stories. More to come!
Posted by Jim at 11:50 PM No comments: 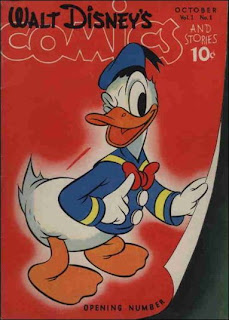 We're celebrating this first day of the New Year here at Tulgey Wood in style with the very first issue of Disney's flagship comic book Walt Disney's Comics and Stories. Issue Number 1 was published in October 1940, and what was inside? In addition to the latest episode of Floyd Gottfredson's Mickey Mouse comic strip reprint serial "Mickey Meets Robinson Crusoe" (originally published in newspapers in 1938 and 1939, and started serially in Walt Disney's Comics' predecssor Mickey Mouse Magazine), there were reprints of Al Taliaferro and Bob Karp's Donald Duck newspaper comic strip, "stories" about the Silly Symphonies The Robber Kitten and Water Babies, puzzles, riddles and even "Mickey's Hints" about such matters as table manners. The cover with that mischievous Duck giving a sly wink as he opened up the "Opening Number" might be an indication Donald knew he had not only taken over for Mickey on the cover of Mickey Mouse Magazine (Donald was on the last four Mickey Mouse covers of that Magazine, of which the new comic book was a continuation) but would also appear on almost every Walt Disney's Comics cover from 1940 through today (although in recent months Mickey has been spotlighted on the cover). On the back cover was a list of winners for the drawing contest from the July issue of Mickey Mouse Magazine, another indication that Walt Disney's Comics is a continuation of Mickey's mag. After you enjoy this primo Disney art (attributed to premier Disney artist Hank Porter), check out my online article about Walt Disney's Comics and Stories at the (free) D23 website. The 1st issue of the number 1 best selling comic book in history just seemed appropriate for 1/1/11—stop by for more about Walt Disney's Comics and Stories in the following days.
Posted by Jim at 8:05 PM No comments: