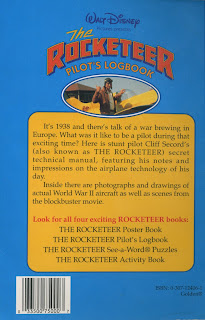 As you know from reading "This Day in Disney History" on the D23 website, today, June 21, is the anniversary of the release of Disney's The Rocketeer in 1991. As was the norm in earlier eras, Golden Press released a number of tie-in publications for this modern-era live-action film, and this Pilot's Logbook was one of the best and most interesting. Also interesting is the exclusion of any photo of the Rocketeer in his Rocketeer costume. This was probably deliberate to offer variety to the other publications that showed nothing but the Rocketeer costume. This particular book gives us a good look at Bill Campbell, who so perfectly portrayed pilot Cliff Secord, aka the Rocketeer, in or out of the famed Rocketeer helmet and rocket pack.
Posted by Jim at 12:08 AM No comments:

As you know from the excellent daily feature "This Day in Disney History" (written by Scott Wolf) on the D23 website (remember, this terrific continuously-updated website is free), on this date in 1957, Walt Disney's Johnny Tremain was released. Originally intended for the Disneyland TV series, the filmic adaption of Esther Forbes' top-selling account of a young silversmith apprentice being caught up with the Sons of Liberty and their fight for freedom in colonial Boston turned out so well Walt released it in movie theaters instead. Directed by Robert Stevenson (his first Disney effort), this fine film was adapted for the Sunday comics page in one of my favorite comics, Walt Disney's Treasury of Classic Tales. Written by Frank Reilly and drawn by comic-art great Jesse Marsh, here's the June 9, 1957 installment (click on the image above for a larger view) to celebrate Johnny Tremain's anniversary day. (And in case you're wondering, as far as we know, young Master Tremain is no relation to Cinderella's stepmother—she spelled her name with an "e.")
Posted by Jim at 10:09 PM No comments: 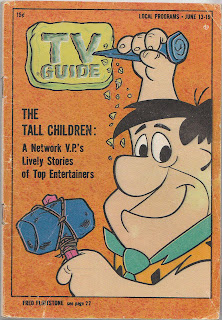 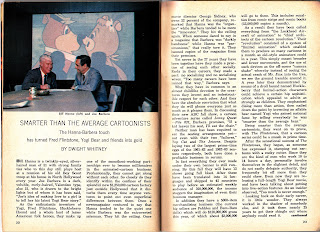 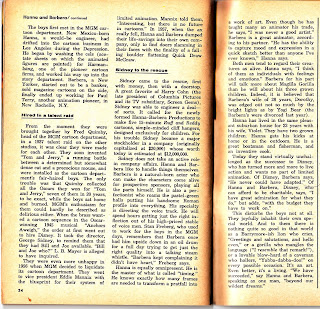 From June 1964 (when TV Guide ran actual, in-depth articles), here's a TV Guide story covering Hanna-Barbera, complete with a specially created cover starring TV favorite Fred Flintstone, then at the height of his prime-time popularity. Published just before Jonny Quest (still entitled Jonny Quest File 037 as this article was printed) premiered in the fall, the article includes some interesting tidbits, including the number of Hanna-Barbera comic books published per month (55,000,000) and that film director George Sidney owned 22 percent of Hanna-Barbera Productions. There's also a quote from Walt Disney, who diplomatically says, in essence, they did the best they could with the money they spent. Read on and enjoy this historic article about the creators of the pre-historic Flintstones.
Posted by Jim at 11:18 PM 1 comment: 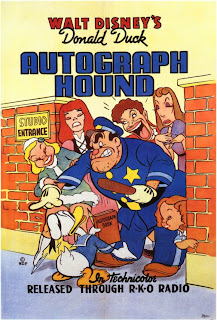 Today's the day—June 9, 2009, Donald Duck's 75th anniversary— and you'll find plenty of Ducky ways to celebrate over at the D23 website, including a celebration of Donald's enduring superstardom written by me. Be sure and read "Donald Duck, Superstar!" by Jim Fanning at the D23 website, and find out some light-as-a-duck's-feather fun facts about the world's favorite (and most foul-tempered) fowl.
Posted by Jim at 10:26 PM 2 comments: