A Ticket Book To Ride For Disneyland's Anniversary

July 17, 1955 was Disneyland's Opening Day—and to celebrate that significant date on its anniversary, here's a glimpse of a Disneyland Ticket Book I am lucky enough to own. Aside from being nearly intact—only the B Ticket is missing—this wonderful piece of Disneyland history also includes a "welcome" message from Walt Disney. The Ticket Book, issued sometime between 1959 and 1966, was a practical item but in those days Walt and his Park never missed an opportunity to make guests feel more welcome and to make a better show—this warm and classy "welcome" is an awesome example of showmanship. Enjoy this bit of unpretentious and highly effective bit of welcome to Walt Disney's Magic Kingdom. Click on the image of the front or the back of the book for a larger view.
Posted by Jim at 12:50 AM No comments: 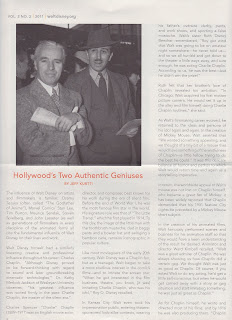 Wondering if you should become a Member of the Walt Disney Family Museum? Consider this: Members get a specially produced Members Newsletter. This 8-page quarterly publication showcases, among other features, articles written by Disney historians. The most recent issue (Volume 2, Number 2), for example, boasts an excellent article about Walt Disney and Charlie Chaplin. Entitled "Hollywood's Two Authentic Geniuses," this exploration of the relationship and mutual admiration of the two legendary filmmakers is written by Jeff Kurtti, and Jeff's as-always excellent writing makes this Newsletter a must-have. This same issue also includes an article by Disney historian Paula Sigman Lowery about Walt Disney's So Dear to my Heart (1949). (Both Jeff and Paula were instrumental in the creation of the Walt Disney Family Museum and its content—and I was honored to be invited by them to be a part of the writing and research of the Museum's historical content.) So even if you live far away from San Francisco, home to the Walt Disney Family Museum, consider becoming a Member—the Newsletter alone is worth it, thanks to contibutors like the illustrious Mr.Kurtti. See the Museum's website for more Membership info.
Posted by Jim at 12:20 AM No comments:

It's Fireworks with America On Parade!

The Fourth of July brings out the fireworks, so the timing is perfect for a firecracker of an article about America on Parade. This was Disney's Bicentennial salute to the history, people, achievements and amusements of America on her 200th birthday, a patriotic-plus pageant presented at both Disneyland and Walt Disney World in 1975-1976. To celebrate Independence Day I wrote "A Fourth of July Salute: Disney's America on Parade" and it's on the D23 website. There have been Disney Theme Park parades before and since of course, but there's never been anything quite as unique as this Bicentennial bash with its specially created band organ score, mammoth float-like mobile stages and—most memorable of all—those towering People of America costumed characters. So in the spirit of '76 (both 1776 and 1976) go to D23.com (it's a FREE site for everyone) for a look at the fascinating fireworks behind America on Parade, written by Jim Fanning. (Above is the FanFare email sent to D23 members. Click on the image for a larger version.)
Posted by Jim at 1:55 AM No comments:

From The Peanuts Gallery: Shermy 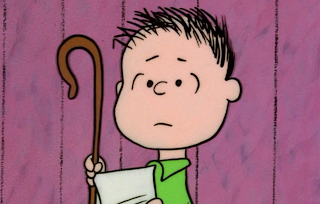 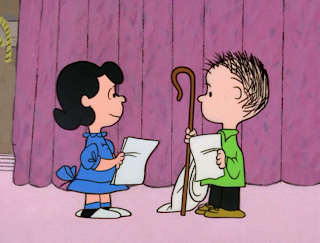 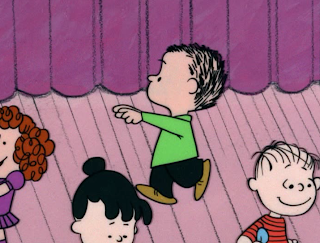 It's July and that means it's Christmas in July here in Tulgey Wood, for that jolly season is just a half-year away. To get things off to a truly true-spirit-of-Christmas start, let's turn to that most famous of TV holiday specials, A Charlie Brown Christmas. One of the most interesting things about this endlessly fascinating TV special from 1965 is that it's a snapshot of the strip as it was then (for example, the special shows Snoopy performing impressions but he had not yet regularly taken to wearing costumes or walking upright as a usual habit yet). So the special features Frieda, Violet, Patty, and even 5—and Shermy too. In fact this apperance in one of the most widely-seen Christmas specials ever produced (it's been shown on network TV ever since its debut on December 9, 1965, to huge ratings each year) is one of the main reasons Shermy is remembered, if at all. Poor Shermy deserves better if only because this mild-mannered crew-cut sporting boy was not only one of the strip's original cast of characters in the first installment published on October 2, 1950, along with Charlie Brown and Patty (Snoopy joined the strip two days later), he's also the first character to speak, and also the first (again) to not only mention Charlie Brown by name but also the first to utter the famous line "Good Ol' Charlie Brown," which Schulz immortalized as the unofficial title of the comic strip. Thankfully Shermy himself is immortalized in A Charlie Brown Christmas for he both dances up a storm in the famously free-form dance sequences so well-remembered by most everyone whose seen this animated film and has his very own line: "Every Christmas it's the same: I always end up playing a shepherd." This is Shermy's lament upon being handed his script and costume for his role in the pageant. Perhaps this was some unconscious or even deliberate commentary on Shermy's own position in the strip: he is perennially as a bit player. Personally I have always considered Shermy the Zeppo Marx of the Peanuts gang, and I don't mean that as an insult. Only Zeppo, as a full-fledged Marx Brother, could get away with some of the actions and dialog he was afforded in his few films, even though the lion's share of the laughs and onscreen action was given to Groucho, Chico and Harpo. And so it is with Shermy: he may not have had much face time in the strip or specials, but only a full-fledged Peanuts cast member would be allowed such wry observations. See this little-known Charlie Brown booklet for another Christmas-related example of Shermy's prescience.
Posted by Jim at 3:30 AM 1 comment: