From the Pages of Sketches Magazine: Walt Disney’s Magic Kingdom 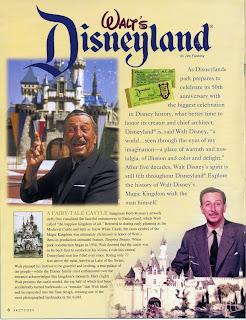 In the Summer 2005 issue of Sketches, the Official Magazine of the Walt Disney Collectors Society, there appeared an article written by me to celebrate the golden anniversary of Disneyland® Park. Featuring rare ephemera and precious photos from the Walt Disney Archives and the Disney Photo Library, this article served to celebrate five fantastic decades of Disneyland goodness, with the emphasis on Walt's own favorite attractions and contributions. Sketches is available exclusively to Members of the Walt Disney Collectors Society, so be sure and become a Member by going here . And in the meantime, celebrate the anniversary of Disneyland with this article about the man who started it all.
Posted by Jim at 5:48 PM No comments:

If you are a Facebooker you'll want to join a very special group on Facebook—The Walt Disney Animation Studios Animation Research Library. The mission of the ARL is described on the page as "Entrusted to conserve and protect the artistic heritage of Walt Disney Animation Studios, and to ensure the ability of the Walt Disney Company to utilize the collection, 'in-house,' as a creative resource." Even if you are not "in-house" you can join this group and find out about some of the wonderful projects the treasure trove that is the ARL is involved in, such as books, DVDs, the Mary Blair exhibit in Tokyo and the Princess and the Frog exhibit in New Orleans. You will even come across some of the expert, helpful and friendly professionals I work with on my projects, such as Sketches, the Official Magazine of the Walt Disney Collectors Society. Be sure and join the ARL on Facebook.
Posted by Jim at 4:42 PM 1 comment: 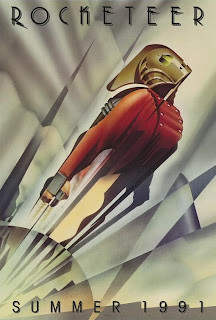 Back here I mentioned the unseen-on-the-book-cover-in-question Rocketeer costume, so here's a chance to see the actual costume as lovingly preserved in the Walt Disney Archives. On the D23 website, Disney archivist Rob Klein has written about the unique costume (complete with rocket back) worn by Bill Campbell in the terrific 1991 Disney film (the original poster is pictured at left), and tells you how you can see some great photographs of this amazing movie artifact (only for the next month or so, so don't delay). While you're there, check out the rest of the D23 website—it's loaded with fun and fascinating content, it's updated every day, and it's free and open to everyone.
Posted by Jim at 12:31 AM 4 comments: 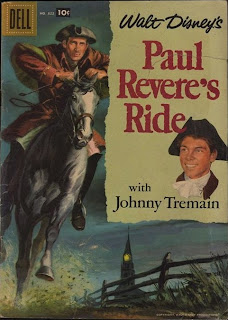 There's no better way to celebrate Independence Day here in Tulgey Wood than to celebrate Walt Disney's Johnny Tremain (1957). To do just that, let's showcase one of two comic books created to tie-in with the Disney screen adaption of Esther Forbes' superbly researched and written historical novel (still one of the bestselling books for young readers). The comic story itself was drawn by the masterful Alex Toth (he also drew other Disney comic-book adaptations, including his now-legendary Zorro stories) but the striking cover is attributed to illustrator Taylor Oughton, who created other action-adventure covers for Dell-published comics in the 1950s. The comic-book adaptations covers hedged their bets a bit, emphasizing the real Revolutionary War-era people and events over Johnny and his fictional friends. As seen in this cover from Four Color # 822, published in August 1957, the emphasis is all on silversmith Paul Revere, with Johnny (a silversmith apprentice) given a mere "with" billing and a cameo portrait. Incidently, last year, Walt Disney's Johnny Tremain was screened at Boston's Old South Meeting House on July 3. Let's hope that historic city makes a July 4th screening an annual event, for where better to see the movie about Johnny Tremain (Remember His Name) of Old Boston Town than in Boston itself.
Posted by Jim at 1:07 AM No comments:

Horse Laughs On The Mouse Factory 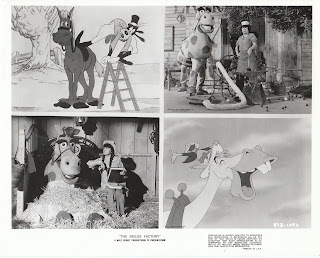 Back here I promised more on Disney's TV series The Mouse Factory so here's a publicity still from the thirteenth episode of the show starring guest-host Jo Anne Worley. Underrated and underused over the years, the wacky Ms. Worley made a splash as an original cast member on NBC's Rowan and Martin's Laugh-In. Having guest hosts (or Mickey's Friends, as they were billed) such as Jo Anne was only appropriate as The Mouse Factory was Disney's own sort-of version of Laugh-In. As you can see, this episode focused on horses in Disney animation. I love that zany costumed horse, a character called Cyril, who was supposedly the original horse of a different color. I don't know if Cyril was named in honor of (or was perhaps even supposed to be) Cyril Proudbottom, Mr. Toad's horse pal, pictured here in the lower right-hand image from the "Wind in the Willows" segment of Walt Disney's The Adventures of Ichabod and Mr. Toad (1949).
Posted by Jim at 5:57 PM 1 comment: