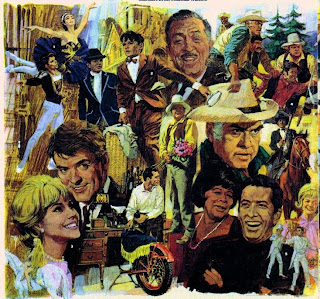 Both last season and this, NBC has returned to its "living color" roots from the 1950s and 1960s (the phrase was first used for NBC's then-few color broadcasts in 1953) with a campaign promoting its shows and their characters as "More Colorful." This naturally makes me think of Walt Disney's Wonderful World of Color, which at the start of the 1966-1967 TV season (when NBC finally became the "The All Color Network," as 100% of NBC's programming—from Today in early morning through Tonight at late night— were colorcasts) was promoted with this artwork, along with the rest of the Sunday prime time lineup. Featured are Bryan Russell and Roger Mobley starring in not "Gallegher" but instead the 1964 theatrical release Emil and the Detectives, which was the World of Color season premiere. (By the way, thsi art comes to us from Rankin-Bass historian Rick Goldschmidt's must-see blog, a fun visit anytime but especially during the holidays.)
Posted by Jim at 4:38 AM No comments: 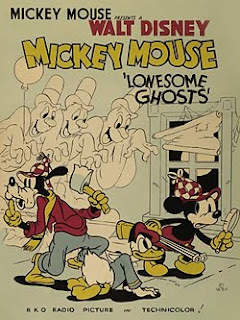 As I'm sure any regular visitor to Tulgey Wood already knows, the ever-prolific Mark Evanier has posted on his always-updated blog about the classic "mirror scene" scene in which a look-alike character tries to convince that character he is looking at a reflection of himself and not another person. Among others, Mark lists Groucho and Harpo in Duck Soup (1933) and Harpo and Lucille Ball in the famed 1955 "Lucy and Harpo Marx" episode of I Love Lucy. Not mentioned, however, is Goofy and a mischievous spook playing out their own version of the mirror scene in Walt Disney's Lonesome Ghosts (1937). It's truly one of the best versions of the mirror routine—all the more so because it's animated, brilliantly, by veteran Dick Huemer. You can see a glimpse of it above (click on the image for a larger view) thanks to an animator identification mosiac created by Mark Mayerson for his excellent blog. PS Patty Duke did a version of the mirror bit too on her 1960s TV series The Patty Duke Show in which the Oscar-winning actress famously portrayed identical cousins.
Posted by Jim at 4:12 PM No comments: 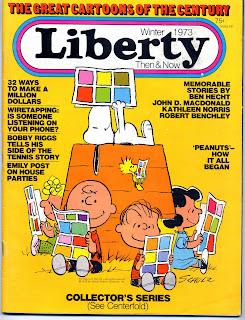 To celebrate the birthday of Charles M. Schulz, here's a cover he drew for Liberty magazine, in its "nostalgia" reincarnation (hence the "Then & Now" appendage). Schulz must have been pleased to draw the cover of this issue celebrating the comics, as he had always been an avid reader and appreciator of the comic-strip art form. (Even his nickname was inspired by the racehorse Sparkplug in the Barney Google strip—that's right, "Google" once referred to something other than a search engine) In addition to including Schulz among the "Great Cartoonists of the Century," this issue also included an article about Sparky and Peanuts, which during this time—the cover date of this magazine is Winter 1973 —was an ever-expanding, unbelievably popular phenomenon. The article features the following observation: "There is no doubt in my mind that drawing a comic strip simply has to be the best job in the world. People send you wonderful letters. the syndicate for which you work sends you enough money to live on, and you are allowed to draw all of the pictures that you have been wanting to draw ever since you were a little kid." Typical Schulzian understatement, with none of the bitterness ascribed to him by recent biographers. What better way to celebrate Sparky's birthday than reveling in this specially drawn art (click on the image for a larger view.)
Posted by Jim at 4:55 PM No comments:

The Buzz About The 2010 Macy's Thanksgiving Day Parade 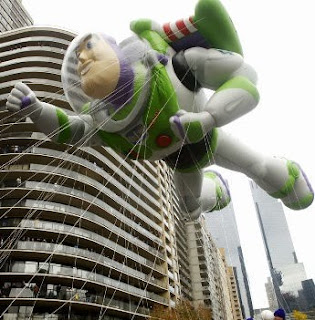 Did you watch the 2010 edition of the Macy's Thanksgiving Day Parade yesterday on NBC... and if so, did you see John Lasseter as one of the volunteer handlers at the end of one of the Buzz Lightyear balloon's tethers? I wasn't even sure it was actually John but I rewound the DVR to double-check and sure enough, it was Pixar (and Disney's) own chief creative officer. I had no idea he was to be part of the parade in any capacity, but Reuters was, as they published the Disney press release here. Here's a photo of the Buzz balloon from NYDailyNews.com Also, about my post regarding the new Virginia balloon being the only Macy's parade balloon to be based on a real person: further research reveals that there was an Eddie Cantor balloon in 1940, in honor of the then-famous, now almost-forgotten Broadway-radio-movie star Eddie Cantor (whose public-awareness may be on the rise, however, as he's a character in the HBO mini-series Boardwalk Empire.)
Posted by Jim at 1:24 PM No comments: 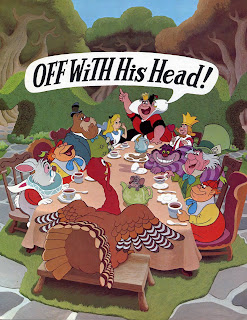 Here's a rare Thanksgiving treat—a piece of seldom-seen Disney art that graced the November 27, 1981 issue of Disney Newsreel, the Disney Studios' in-house newsletter. I couldn't find a credit but I'm quite sure this whimsical bit of Wonderland insanity was created by Disney artist and author Russell Schroeder. It's a feast for the eyes, so be sure and click on the art for a bigger helping. Happy Thanksgiving! (PS I see that Matt over at his Wonderland blog already ran this art in 2008. Be sure and check out Matt's blog, it too is a feast of madness any day of the year.)
Posted by Jim at 2:40 PM No comments: 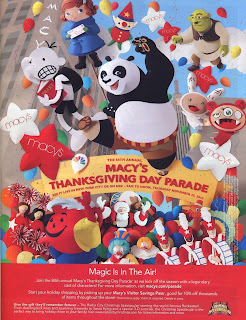 It's time for the annual Macy's Thanksgiving Day Parade, and also time for the equally fun and colorful annual poster. I love the cut-out style art—it also has a sort of felt-board feel—and as always this annual artwork conveys the excitement of the world's most famous parade. (Click on the poster for a larger view.) Greg, the title character of the bestselling Diary of a Wimpy Kid books, makes his debut as a giant balloon, and I say anytime a character from a book joins the lineup of Macy's balloon characters it's a good thing. A writer also joins the pageant's inflatable array this year, believe it or not —it's Virginia, the star of the animated Yes, Virginia Macy's-sponsored CBS special. Virginia is of course the author of the famed 1897 "Is there a Santa Claus?" letter-to-the-editor. So is Virginia the first Macy's balloon to be based on a real person? She may well be... not that I don't think that Spider-Man and Snoopy aren't real—or at least they seem be. (Update: See this post for the only other "real" person to be represented as a Macy's balloon. No, it's not Buzz Lightyear.) Tomorrow, Thanksgiving Day, tune into NBC for the parade, featuring as it did last year Jimmy Fallon and the Roots. It will be, as Jimmy said a couple of nights ago on his show, "Super fun!"
Posted by Jim at 4:23 AM No comments: 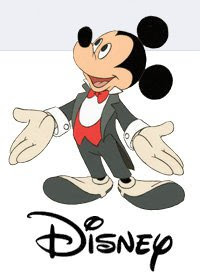 Today is the anniversary of Mickey Mouse's debut in Steamboat Willie (1928), Mickey's "birthday," so it seemed like a good opportunity to point out that the birthday boy is on Facebook. Yes, Disney has an official Facebook page for Disney characters, movies and parks, and it's a lot of fun. So many favorite characters are listed as having their own official pages, everyone from Mickey and Minnie (it's her birthday too!) to Edna Mode, from Dopey to Dr. Facilier, from Aurora to Tangled. Celebrate the Mouse who started it all and all that he started (Walter Elias Disney has a Facebook page too) by "Liking" the official Disney Facebook page. (Once there be sure and click on the tab that takes you to the individual Disney Pages.)
Posted by Jim at 12:01 PM No comments:

Fantasound: Not Just For Fantasia Only 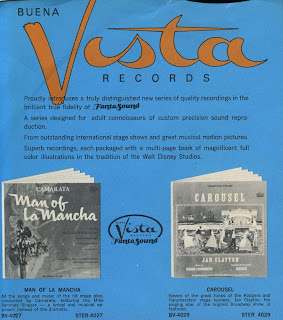 I've been writing a lot about Walt Disney's Fantasia (1940) lately, and that magnificent film is being released as a Diamond Edition Blu-ray later this month...so what better time than now to take a look at Fantasound. I don't exactly mean the Oscar-winning multichannel sound system created for Walt's animated masterpiece but rather a little-known series of recordings released in the late 1960s by Disney's prestige label, Buena Vista Records. Promoted as a sophisticated adult listening experience for the serious audiophile, and recorded mostly in Europe, these specialized LPs were first issued in 1967. The Fantasound albums featured classical selections and the scores of Broadway shows (and The Happiest Millionaire, the Disney musical in release at the time). Billboard magazine reported that Vista launched a major promotional campaign for this internationally-distributed adult-oriented series, elements of which included posters, counter displays and special discount rates to retailers. Another promotion was included on the inner sleeve included in all Vista albums, the Fantasound detail of which is pictured above (click on the image for a larger view). Plus watch this blog for news of some of my upcoming writing about Fantasia.
Posted by Jim at 2:34 AM 1 comment:

Conan Takes To The Skies Over Burbank 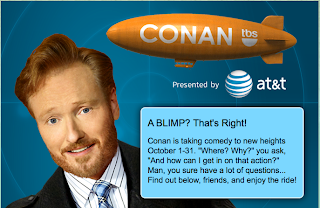 Living in the center of Hollywood (well, it's really Burbank) one gets to see a lot of things some people living in some other parts of the country might not. For example, I have seen overhead on numerous occasions the Goodyear blimp and the Fuji blimp. (Sadly, I have never seen the MetLife blimp, featuring the famous World War I Flying Ace.) Today I saw the new Conan blimp. It seemed to be basically flying over the Warner Bros. lot, which would make sense as Conan does his freshly-minted late-night show from that lot, which is right here in Burbank. I imagine Conan will make reference to his blimp being directly overhead. I'll soon know as his show starts in less than a half-hour as of this writing. (I'm not surprised Conan has a blimp as he has always seemed to like them... if memory serves, I think he had Andy Richter spend an entire episode of his first NBC series aboard the MetLife blimp. Some people have all the luck.) You can find out more about the Conan blimp and even track its travels (so you will know when its over your city) here. (Even though the graphic above says the Conan blimp will be in flight through October 31, its flight has been extended trough November.)
Posted by Jim at 10:03 PM No comments: