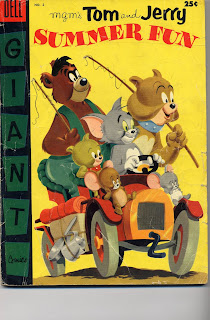 It's Labor Day weekend, the traditional end of summer vacation—the last gasp of vacation, so to speak—so here's a bit of summer fun, comic book style. This colorful 1955 cover conveys all the fun of a summer road trip, as enjoyed by Tom (who knew he had a driver's license?) and Jerry (and little Tuffy, Jerry's comic book-only sidekick) and their friends. This is (another) opportunity to all you Tulgey Wood visitors that I will be back to blogging on a more regular basis soon. In the meantime, please enjoy this choice bit of comic art—and for some real late summer fun, visit Thad K's blog, as he's posted a full Tom & Jerry comic story from March 1951, drawn by the wonderful Harvey Eisenberg here (scroll down until you see the Tom & Jerry story).
Posted by Jim at 11:52 PM 1 comment:

How Will I Know My Love? 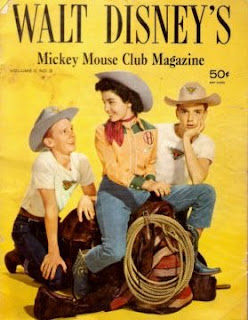 Good news for all Disney fans: the new wave of the fantastic Walt Disney Treasures DVDs has been announced, and in addition to Donald Duck Volume III and the Scarecrow of Romney Marsh (more about that soon), the really great news is that the entire "Annette" serial from The Mickey Mouse Club TV show is getting the Treasures treatment. Starring (who else?) Annette Funicello, the serial co-stars those Disney TV faves Tim Considine and David Stollery (pictured here with Annette in their most famous Spin-and-Marty guises on a 1957 cover of Walt Disney's Mickey Mouse Club Magazine) the serial was a showcase for the most popular of the Mouseketeers. It's a thrill to anticipate not only every installment of this fun story being available to everyone on DVD but also what bonus materials might be included. (At the very least we can anticipate another full, hour-long episode of The Mickey Mouse Club, as was presented on the "Spin and Marty" and "Hardy Boys" DVDs.) Most of all we can look forward to "our fav'rite sweet brunette...Annette! Annette! Annette!"
Posted by Jim at 3:31 AM 1 comment: 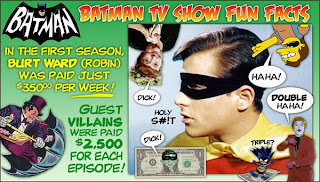 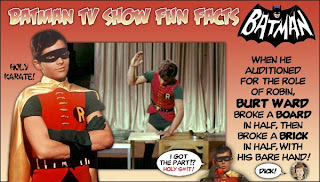 With all the attention gained by Heath Ledger’s breathtaking performance as the Joker (and the actor’s untimely death) and the overwhelming popularity of The Dark Knight (some now believe that this new Batman film will overtake Titanic [1997] as the all-time box-office champ), there’s been plenty (and by plenty I mean more than usual) of Batman history and analysis on the Internet. One of the best aspects of this expanded interest in Batman is the attention being given the Batman TV show, the ABC twice-a-week series that created a nationwide Bat craze in 1966. One of the best comic book blogs (it’s actually more of an online magazine), Dial B For Blog, has already featured an extensive and authoritative history of the "secret origins" of the Batman TV show, but now the “blogazine” features 16 “Batman Fun Facts” created by Dial B For Blog’s Robby Reed, illuminating some fascinating factoids about the television series. I’m including two of these trading card-like “Fun Facts” here to spotlight Burt Ward, who portrayed the definitive Robin. Despite the woeful and disgraceful salary paid this co-star of a hit series, as seen in the first Fun Fact here, it’s incredible to realize that, in a overnight-stardom Hollywood story, young Mr. Ward (real name: Bert John Gervis, Jr.) was cast out of nowhere without any film, TV or acting experience, because he was the very embodiment of the famous superhero teenage sidekick (and because of his athletic abilities—as you can see from one of the Fun Facts included here, Burt was skilled in karate). Burt’s overplayed earnestness was part of the show’s over-the-top “camp” approach to what are after all outlandish characters, and his overly enthusiastic exclamation, “Holy [you-name-it], Batman!” (an expression that I very much doubt the comic-book character ever employed), became a catchphrase that is still evoked today (and I find it hilarious that in both of the "Facts" represented here, Robby Reed could not resist suggesting Robin is saying a "Holy" that he would never actually say on the show!). But I think it’s important to keep in mind that Burt’s Boy Wonder works on a sincere level and is even appreciated as a role model for some viewers. I remember reading in the Comments section of some website related to the Batman TV series a post saying that the grandmother of the person posting had praised the TV Robin’s manners and respectful attitude, and it took the commenter years to fully appreciate the truth of that observation. You can see all of Robby Reed’s Batman Fun Facts (and the rest of his extraordinary blog) here. (P.S. Happy Birthday, “Boy Wonder”!)
Posted by Jim at 11:40 PM 2 comments: 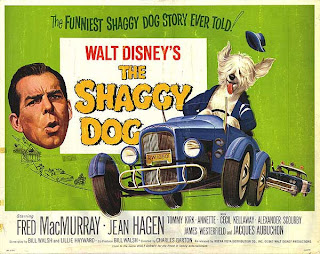 In just a few hours, Turner Classic Movies is up to its old tricks: showcasing some worthy Disney movies (in other words, treading where Disney Channel dares not go). As part of their month-long Summer Under The Stars series (a different movie star is saluted each day of August), TCM is presenting three Fred MacMurray films in a row (starting at 4:15 am PST): The Shaggy Dog (1959), The Absent-Minded Professor (1961) and Son of Flubber (1963). If you can't catch that sterling triple-feature check out the decidedly-not-Disney The Apartment (1960) featuring one of Fred's best (and not-too-Disney) performances. And keep your eyes on TCM for both the occasional Disney gem and other terrific films, some of them starring one of Disney's favorite stars, Fred MacMurray.
Posted by Jim at 2:06 AM No comments: 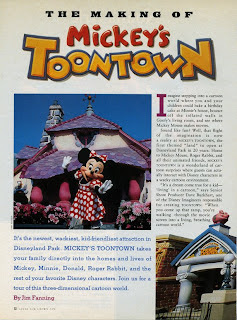 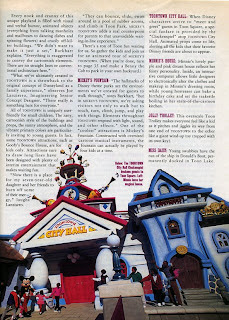 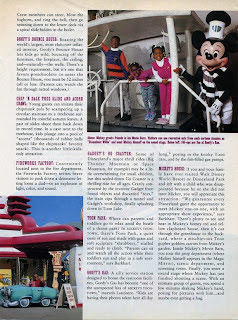 2008 marks the 15th anniversary of Mickey's Toontown, which opened in Disneyland Park on January 24, 1993. To commemorate the occasion, here's an article I wrote for the beautifully-produced (and much-missed) Mickey Mouse Magazine. I well remember being at Disneyland with some other journalists in 1992 on the day before Thanksgiving to get a preview of Mickey's Toontown so I could write this article. Aside from having a wonderful time seeing the new Disneyland "realm" before it was even quite finished, I remember that day because driving home about 5:00 p.m. on the 5 Freeway was probably the worst freeway traffic I've ever seen here in Southern California. It was of course rush hour but because it was Thanksgiving "Eve" the crush of everyone heading home or wherever they were going was stupendous. This article actually ran in the "Guide For Grown-Ups" section of the magazine (a magazine-within-a-magazine, really), but I also wrote a more "kid-friendly" article for the Mickey Mouse Magazine proper. I'll post that article too sometime before 2008 is over. In the meantime I hope you enjoy this article covering the creation of Mickey's Toontown.
Posted by Jim at 12:00 AM No comments: