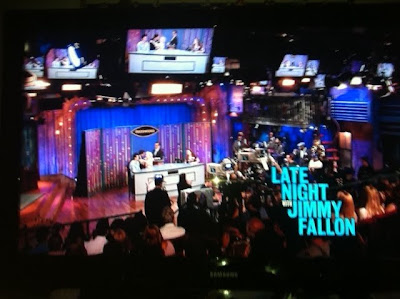 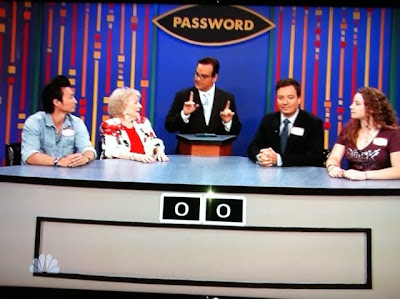 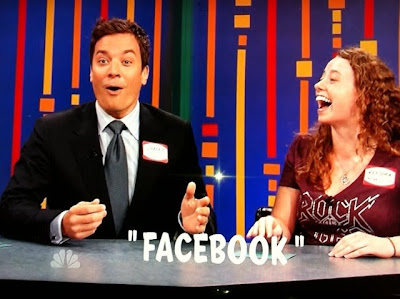 A lot of games are played on Late Night with Jimmy Fallon, but nothing has been more fun that the show's recreation of the classic TV game show Password. Included is a spot-on reconstruction of the show's set, and Jimmy and friends play the game just as it was in the 1960s. The theme music is the same and even the introductory ritual—each celebrity introduces his or her playing partner (chosen from the studio audience), with the second star then saying, "...and we're all here to play... Password!" Then the game's title is superimposed over a shot of the audience applauding. I assume Password was brought aboard the Fallon show because of the appearance of Betty White. In a previous guest shot Betty played Beer Pong with Jimmy, but how long could fan-of-classic-TV-and-show-biz-and-games Fallon resist playing Password with Password maven White right there in the studio? Not long, as tonight's show proved. Betty was as sharp as a tack, as always, but I have to say it was a thrill to see Jimmy (no slouch himself at any game) guess "Facebook" on the first clue, "like." Betty White's Password connection goes beyond her expert playing or her many appearances on the show, of course. Betty married host Allen Ludden in 1963 and they remained together until his death in 1981. In fact, in a touching moment, White told Fallon that her appearance on his version of Password marked what would have been her and Ludden's 48th wedding anniversary (The show was taped on June 14 for broadcast today at 12:37 am June 15.)
Posted by Jim at 3:20 AM No comments:

Break A Leg, Spidey (I Don't Mean That Literally) 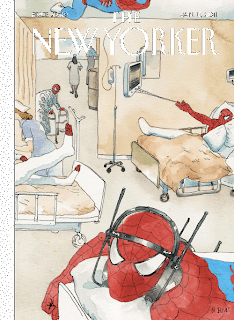 Tonight, after many delays and, famously, injuries (as immortalized by the January 17, 2011 New Yorker cover at right by Barry Blitts) the multi-million dollar musical Spider-Man, Turn Off the Dark at long last opened on Broadway. In honor of the show's opening Broadway.com today posted an excellent timeline that untangles the tangled web of creative personnel turnovers, escalating budgets, closings and previews, right through Sunday's Tony Awards and tonight's opening. Although I haven't seen this production, the obviously talented Reeve Carney isn't my idea of Peter Parker, though I feel the same way about Andrew Garfield, who is Spidey in the forthcoming new film—though I wouldn't be surprised to be proven wrong when (and if, in the case of the Broadway show) I see these actors in action in the role. (Disney fans, you do know that Disney paid $4 billion to buy...oh never mind, you all know that by now.)
Posted by Jim at 10:16 PM No comments: 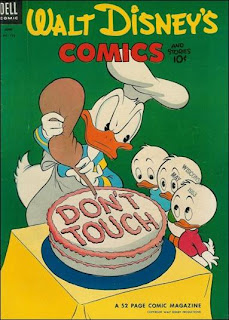 Now that it's actually Donald's birthday (his 77th), here's a classic Carl Barks cover from Walt Disney's Comics and Stories (#153 June 1953, which was the month of the Duck's 19th birthday) that's centered on cake if not specifically birthday cake. Speaking of covers (and Donald and birthdays), did you read my Donald Duck cover story in Disney twenty-three magazine? It was published in the Summer 2009 issue to commemorate Donald's 75th. If not, you can get a back copy of that ducky issue at DisneyStore.com.
Posted by Jim at 3:39 AM No comments: