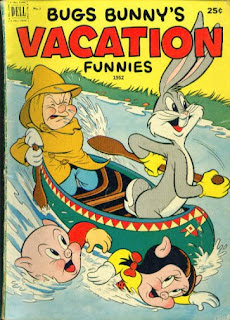 Some of my many millions of loyal readers have wondered why I have not posted since May 4th. Could it be that I’m on vacation, they demand to know? Ehhh, could be, doc…but I’m not. Just crazy busy working on some pretty cool projects I hope to be able to tell you a bit about soon. Posts will continue to be pretty few and far between around here for at least the next few weeks but I will be popping in now and again. In the meantime enjoy the wonderfully drawn cover of this 1952 comic featuring a bunch of characters who actually are on vacation.
Posted by Jim at 11:43 PM 2 comments: 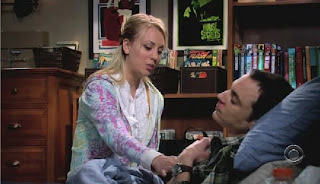 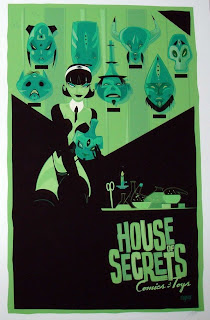 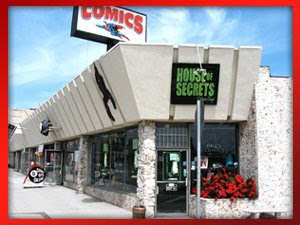 As already pointed out by fellow Big Bang Theory fan Ed Squair at his blog, the genius physicist and geeky social misfit Sheldon (Jim Parsons) feeds his need for new and classic comic books at the same comic book shop that I and many of my friends attend, House of Secrets, right here in beautiful downtown Burbank. (The Big Bang Theory is set in Pasadena so it’s plausible that Sheldon and his fellow genius-physicist-geek Leonard [Johnny Galecki] might buy their comics in Burbank. Or it could simply be that House of Secrets happens to be located near Warner Bros. where the show is shot.) But how do we know that Sheldon goes to House of Secrets? Because he has two pieces of specially commissioned House of Secrets artwork by the artist Ragnar framed on his bedroom wall, as you can see in this image from the episode “The Pancake Batter Anomaly,” originally broadcast on March 31, 2008. (If you have not seen the episode you may wonder what exactly is happening, as it looks as if Sheldon is dead... or as if something entirely different is going on. In fact, Sheldon has the flu and his neighbor, the non-genius/non-geek Penny (Kelly Cuoco) is reluctantly caring for him.) The vintage comic books also seen in Sheldon’s room and framed on the wall were also purchased at House of Secrets. You can see more Ragnar art at the House of Secrets website. You can also see photos of the shop itself (including the one shown here) and imagine Sheldon or Leonard—or me—shopping for some primo comics.
Posted by Jim at 2:55 AM 1 comment:

From The Pages of Sketches: The Love Bug 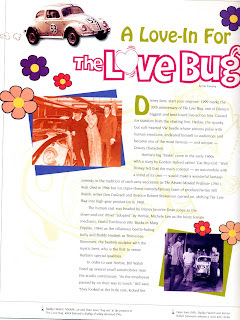 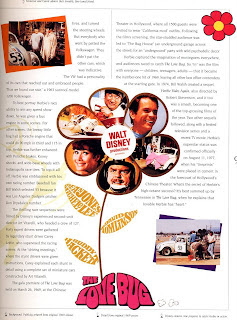 As promised here is an article (written by yours truly) from Sketches, the Official Magazine of the Walt Disney Collectors Society, giving the “behind-the-wheel” details about The Love Bug (1969), created by the talented triumvirate of Bill Walsh, Don DaGradi and Robert Stevenson. For more information on joining the Walt Disney Collectors Society go here.
Posted by Jim at 12:38 AM No comments: 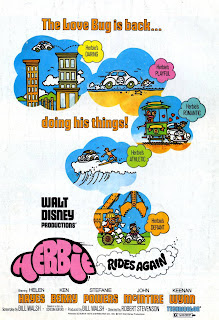 Beating out Cinco de Mayo by two days, Herbie Day is today, May 3rd. Why is May 3rd Herbie Day? Because “5/3” is Herbie’s famous number… and because I say so. To celebrate here’s the fun poster for Herbie Rides Again (1974), the sequel to the wildly popular The Love Bug (1969). Though not as good as its predecessor, Herbie Rides Again has many marvelous moments, as it’s directed by Robert Stevenson and produced and written by the great Bill Walsh who (along with Don DaGradi) created the original. (The other Herbie sequels aren’t worth mentioning.) The film also features the return of Keenan Wynn as Alonzo Hawk, the unscrupulous loan shark from The Absent-Minded Professor (1961). To explain the significance of number 53 and a lot of other fun Herbie facts I’ll soon post an article I wrote about The Love Bug. Meanwhile here’s a "racy" tidbit: at the London (not San Francisco?) premiere of Herbie Rides Again, the gala was illuminated not by klieg lights but by Volkswagen headlights. (PS: Happy Herbie Day, “Hughbie”!)
Posted by Jim at 11:54 PM No comments: