Christmas in July (with Winnie the Pooh) 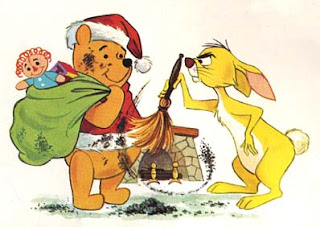 Five months from today is "the dearest day of all the year" (according to the song "December the 25th" from Scrooge), but who can wait to celebrate? So for at least today it's Christmas in July here in Tulgey Wood. To celebrate here is a classic 1973 illustration of Winnie the Pooh making like Father Christmas, much to the annoyance of Rabbit. Where is this delightful artwork from? Stop by Tulgey Wood in December to discover the answer and see more of this Pooh artwork created just for Christmas.
Posted by Jim at 3:35 PM No comments: 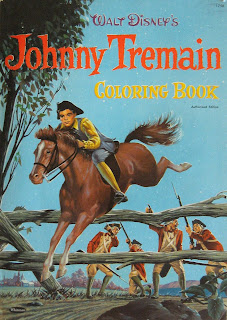 The 1950s saw a rise in awareness of juvenile delinquency and this phenomenon was reflected in the motion pictures produced in that era. From low-budget efforts such as Crime in the Streets (1956) and The Delinquents (1957) to the big-studio, high-profile productions such as The Blackboard Jungle (1955) and most famously Rebel Without a Cause (1955), that paranoiac decade boasted a bevy of big-screen blockbusters focusing on teens running amuck. However, if you are looking for a film about youth in revolt, look no further than Johnny Tremain (1957), Walt Disney's live-action feature about the young silversmith apprentice who joins up with other revolutionaries in colonial Boston. Pictured above is one of the many fun pieces of memorabilia created to tie-in with the film's release in June 1957: an unusually oversized coloring book the cover of which portrays an exciting scene (that by the way never actually occurs in the movie). So enjoy this Independence Day-related artwork, featuring a true Disney "youth-in-revolt"—and for some additional Fourth-of-July fun be sure and read my article about Johnny Tremain at D23.com. (Special thanks to great Disney writer and great friend Barb Layman for giving me the title for this post.)
Posted by Jim at 6:26 PM 1 comment:

As of this writing the three lead articles on the D23 website are pieces written by me. There's an article about Johnny Tremain (just posted, just in time for the Fourth of July), another article about Swiss Family Robinson and yet another about "Gallegher" from Walt Disney's Wonderful World of Color. Pictured here are the three headers about the three articles—go to D23 and click on any of these headers as they cycle through the homepage and you can read the pieces, all written by Jim Fanning.
Posted by Jim at 5:27 AM 1 comment: