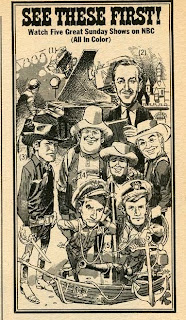 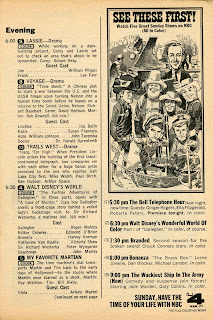 Over at the News From ME blog a few weeks back, Mark Evanier posted about ad art created by the great Jack Davis for the NBC TV season of 1965-1966. In piecing together the incredible TV Guide mural that covered all seven nights of "living color" programming, Sunday was inadvertently left out but was included here at the TV Series Finale blog. To add to the Davis delights, here's the matching Sunday night ad from TV Guide the night of September 26, 1965. Walt Disney's Wonderful World of Color was of course included ("In color, of course"). (Click on the images for a larger view.) Note that on that particular Sunday night, two weeks into the new season, Walt Disney was presenting Part 1 of "The Further Adventures of Gallegher," the follow-up to the previous season's highly-rated and critically-acclaimed "Gallegher," that I have mentioned here before. There will be more about "Gallegher" here soon, so check back to Tulgey Wood for some headline-worthy news about Walt Disney's forgotten TV classic.
Posted by Jim at 5:33 AM No comments: 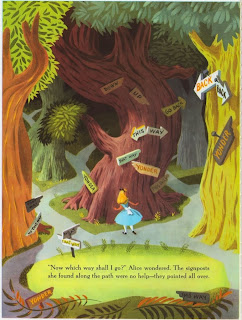 Like that recently departed TV series on ABC, things have been dark and mysterious and well, lost, here at Tulgey Wood lately. In fact, there has been no new post here since January 12. No strange Lost-like secrets are behind this odd absence. The only reason for this lack of any discernible activity is a case of extreme busy-ness, dealing (mostly) with all things Disney. Well, not that's anything has changed, but there's life in Tulgey Wood once more. There will be more posts in the days and weeks ahead, and I'll also be posting a few items retroactivelly to cover some significant events and dates. So wander once more through Tulgey Wood and, as always, you may even see the method in the midst of all the madness. In the meantime, enjoy this Big Golden Book art by that pure-gold artist Al Dempster.
Posted by Jim at 10:10 PM No comments: