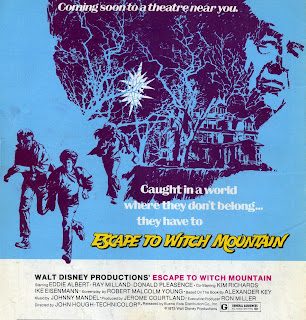 Disney's follow-up to its popular Witch Mountain movies of the 1970s (the fantastic key art for 1975s Escape to Witch Mountain is pictured at the right) released on March 13, and that Friday proved to be a lucky day as the film brought in box office numbers well above projections and industry expectations. As part of the Witch Mountain mania surrounding the new film, I wrote an online article about the first two films for the new D23 website. You can read it here . And while you're there, check out all the other fun D23 content—it's added to everyday.
Posted by Jim at 11:55 PM No comments: 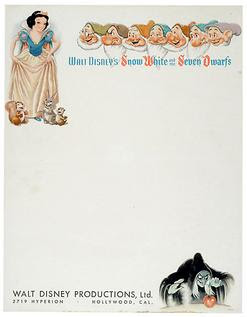 Over the years, the Disney Studios created some fantastic art for its letterhead, official stationary the Studio used for correspondence that at the same time celebrated and promoted a feature-length production. Here's the first example of Disney stationary to salute a Disney feature—naturally, because it was Walt's first feature, Snow White and the Seven Dwarfs (1937). Just in case you're wondering if this example of letterhead is really from the time of Snow White's first release, check out the address—the Disney Studio was still on Hyperion Avenue in Los Angles, where Snow White was produced. For the film's second release in 1944, and for every subsequent re-release, the Studio's address was and is Buena Vista Street right here in Burbank. Hope you enjoy this early piece of art celebrating the first (and fairest) one of all. (This post is dedicated to my mother, who loved Snow White and in fact beautifully reflected the little princess's kindness, compassion and care for others, always with a smile and a song. Happy Birthday, Mom.)
Posted by Jim at 4:51 PM No comments: 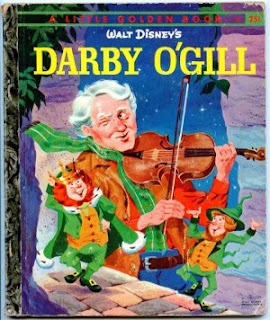 In honor of St. Patrick's Day here's a grand Little Golden Book based on one of Walt Disney's finest live-action films, Darby O'Gill and the Little People (1959). Written by Annie North Bedford (one of the pen names of prolific Golden author and editor Jane Werner Watson) and illustrated by comic book artist David Gantz, this adaptation of the magical movie is the very thing to make us all feel Irish, even for just a day. Darby O'Gill and the Little People may be celebrating its golden anniversary (as is this delightful Little Golden Book) but today 'tis an elegant shade of green.
Posted by Jim at 10:44 PM No comments:

Today was D Day—D23 Day, that is. Disney CEO Bob Iger unveiled D23, the Official Community for Disney Fans at the Disney stockholders meeting. At the same time, the spectacular D23 website went live at 11:00 am PST, and a festive, party-like Event was held at the Disney Studios commissary (and at the neighboring ABC commissary), at which the flyer pictured here was distributed. Answering at last what's behind the mysterious "Are You 23?" campaign, the announcement of D23 reveals the "ultimate Disney experience" as a community allowing Disney fans an opportunity to go behind-the-scenes and feel part of the "magic." In addition to the website, which I highly recommend as having plenty of fascinating content (some of it written by me), the D23 experience includes a lavish quarterly magazine, Disney twenty-three, featuring rare images, exclusive content and richly-detailed articles (the Premier Issue of which includes two articles written by me). D23 got off to a strong start, as shortly after D23 was launched, DisneyShopping.com reportedly crashed when it was inundated with fans wanting to sign up. I'll be posting about D23 on and off from now on. In the meantime, you can discover how to join D23 here.
Posted by Jim at 10:11 PM 1 comment: 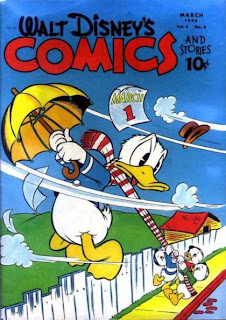 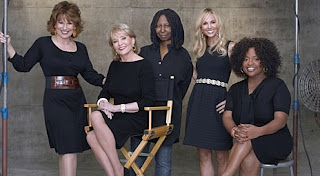 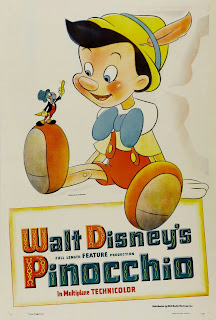 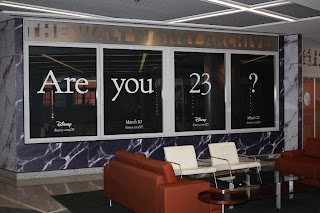 March seems to be the month for madness (just ask the March Hare) and Tulgey Wood (where my motto is "A Method To My Madness") is the perfect place to celebrate all that madness marching our way. (Just to kick things off, here's the classic cover from the March 1944 issue of Walt Disney's Comics and Stories, No. 42, drawn by Walt Kelly. ) This week The View (or as it's referred to by Marie Barone [Doris Roberts] on Everybody Loves Raymond, "the show with the five ladies") is broadcasting from the Disney Studios all this week. Amazingly, each day will feature a tour or an exploration of my haunting grounds, the Walt Disney Archives, including my friends Becky Cline (tomorrow, Tuesday, and Wednesday), Rob Klein (Thursday) and Robert Tieman (Friday). Chief archivist head and Archives founder Dave Smith was on today's episode. In addition, Disney CEO Bob Iger will be on Wednesday to discuss a certain special project.

Tomorrow, March 10, brings the long-awaited Platinum Edition release of Walt Disney's Pinocchio. This animated masterpiece is finally getting the two-disc Platinum treatment, with loads of extras and bonuses, especially on the Blu-ray version. (I was lucky enough to write the Pinocchio trivia quiz and some of the pop-up on-screen fun facts [the ones about the making of the film] for this new edition.)

And of course tomorrow, March 10, brings the announcement of exactly what Disney's mysterious "Are you 23?" is all about. (The photo here was taken in the lobby of the Frank G. Wells Building on the Disney lot, and was originally posted on LaughingPlace.com.) Go here tomorrow (or right now to have Tinker Bell bring up a countdown) for all the details.

Enjoy March, embrace the madness!
Posted by Jim at 5:18 PM No comments:

Here's the front and back covers of the 2009 brochure for the Walt Disney Collectors Society. (The brochure was written by me, incidentally). As you can see, Dopey is the subject of the Membership Gift Sculpture you get as a Society Member. Best of all, the Society Membership includes a subscription to Sketches, the Official Magazine of the Walt Disney Collectors Society. Mentioned many times on this blog, Sketches is the publication of which I am editor and staff writer, and of course includes great articles by many other fine Disney writers too. So don't be "dopey"—get your Dopey Gift Sculpture and your subscription to the magazine for every Disney fan by calling the number shown here or by visiting DisneyShopping.com.
Posted by Jim at 2:14 PM No comments: 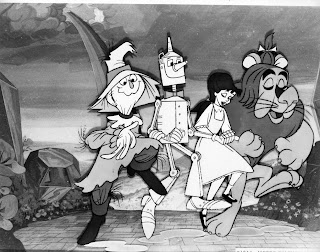 ...but has it come in like the Cowardly Lion? Puts me in mind of the fascinating but little-known animated use of the MGM version of the Oz characters in the animated anthology TV show, Off To See the Wizard. Broadcast on Friday evenings on ABC in 1967-1968, this MGM show (executive produced by Chuck Jones) featured Dorothy and her friends visiting the Wizard as he conjured up a live-action family film (e.g., Lily, Clarence the Crossed Eyed Lion) from the MGM library. The Cowardly Lion (seen here in a publicity still for the TV series) was a fine re-interpretation of the film character, maintaining enough of Bert Lahr's face, makeup and costume from the classic 1939 movie to be recognizable as the Lahr characterization, and voice artist supreme Mel Blanc did a fine vocal caricature of Lahr's voice. As someone interested in both animation and Oz I have a fascination with this now-obscure TV show, and I hope to be running more about it soon. In the meantime, please enjoy this rarely-seen still featuring the famous foursome, complete with rainbow, emerald and Yellow Brick Road as background.
Posted by Jim at 5:59 PM 1 comment: