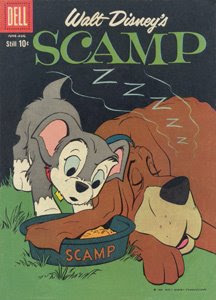 One of the best elements of the D23 website is the everyday update of the "Daily Funnies," three installments of three classic Walt Disney newspaper strips. And even though that line up includes the great classics Mickey Mouse and Donald Duck, in a way the greatest treat is the Scamp comic strip. Scamp of course is the son of Lady and Tramp, and though he only appears briefly if memorably at the end of Walt Disney's classic 1955 animated feature, he became a star of the comics, appearing in his own comic book starting in 1956. And it's not every relatively obscure Disney character who was awarded his own long-running (1955-1988) newspaper comic strip. The D23 site is running these strips in order from day one, so you can see for yourself that at first the comic (drawn by Dick Moores) had a day-to-day continuity, featuring low-key stories of Scamp and his family and friends. Incredibly, the Scamp strip was written for the first eight months by Disney comic-strip distributor KIng Features editor Ward Greene, who also wrote the book on which Lady and the Tramp was based, surely making Scamp the only strip written by the original author of the work from which it sprang. Be sure and check out Scamp everyday at the D23 website (it's free, folks). And in the meantime, enjoy this cover (drawn by Al Hubbard and featuring another Lady and the Tramp character, Trusty) from the issue 14 (June 1960) of the lovable little comic book star's comic book.
Posted by Jim at 10:31 PM 2 comments:

Finding A Nemo Book At The Disney Theme Parks 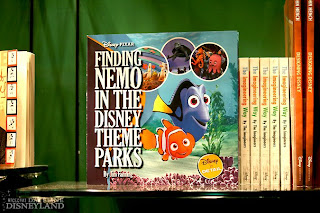 The Mice Chat site recently reported the availability of a new book at the Disney Theme Parks. Entitled Finding Nemo in the Disney Theme Parks, this volume details how guests can experience the finny friends from Finding Nemo here and there, including the Submarine Voyage at Disneyland Park. Look closely at the cover (click on the image to enlarge) and you'll find that the book was written by me, so be sure and find this Finding Nemo book by Jim Fanning if you happen to visit a Disney Park. The book is supposed to be available at Amazon.com at some point too.
Posted by Jim at 11:51 PM 2 comments: 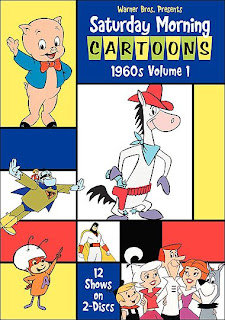 Tomorrow (Tuesday, May 26) sees the release of a DVD that's a treat for lovers of Hanna-Barbera: Saturday Morning Cartoons: 1960s Vol. 1. This DVD provides a grab-bag of fun H-B favorites including Top Cat, Atom Ant, The Flintstones and Quick Draw McGraw. (Many of these cartoons have already been released in "complete season/series" sets but this surprise package-type DVD is being released in an apparent attempt to attract viewers who would not buy the pricier "complete" sets of a given show or character.) Best of all for my money is the inclusion of two excellent H-B "super hero" adventures: The Herculoids and (my favorite) Frankenstein Jr. Neither of these series have been previously released on DVD, and the inclusion of a documentary on Franky (another great reason to get this set) indicates that perhaps a full set was planned and this compromise two-disc set was released instead. We Frankenstein Jr. fans will take what we can get! Now we just have to wait for Shazzan.
Posted by Jim at 10:34 PM 1 comment: 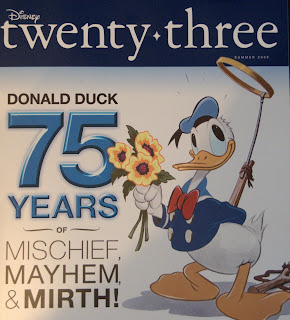 As has already been mentioned on many other blogs and sites, the 2nd issue of disney twenty-three, the magazine of D23, the Official Community for Disney Fans has been published. The cover boasts a spectacular and rarely-seen piece of publicity art (by the great Hank Porter, I'm guessing) to celebrate Donald's 75th anniversary, coming right up on June 9. Readers of this blog might be interested to know that I wrote the cover story on all the fuss and feathers associated with Donald throughout his lengthy career. I also wrote the story about a newly-discovered 1940s Duck theme from Russell Schroeder's terrific second volume of lost Disney songs, and the second installment of Walk with Walt, taking early Disney history beyond 1923 into the Oswald the Lucky Rabbit era. That's a grand total of three articles written by me in this issue, but you can read more about what else is inside the magazine at the D23 website. Where can you get your own copy of this magazine that has been acclaimed as not a mere magazine but as a coffee table book? The Summer 2009 issue of disney twenty-three is available at the Disney Theme Parks, Disney Stores and at Barnes & Noble Booksellers shops. And of course the best way to get the magazine is to become a D23 member. Go here and become a Charter Member today.
Posted by Jim at 10:54 PM No comments: 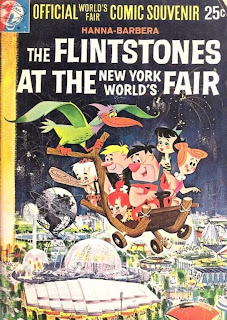 Back here I mentioned the 1964-65 New York World's Fair and its terrific Disney attractions, so I thought I'd mention a fun non-Disney memento from that spectacular event. The Flintstones At The New York World's Fair was a special souvenir comic book. Written and drawn by the usual Flintstones crew at Gold Key comics (the stories even feature the square dialogue balloons Gold Key was using at that time), this specially-produced comic featured not only Fred, Wilma and company, but also a wide variety of Hanna-Barbara characters, including Huckleberry Hound, Top Cat and (from the other end of the time continuum spectrum) the Jetsons. (No Jonny Quest, though.) Coincidently or not, the Flintstones also visited the Fair on their television series during the show's fifth season. Originally aired on January 15, 1965, the episode "Time Machine" found the Flintstones and the Rubbles at the 1964-65 New York World's Fair. Wonder what the modern Stone Age family thought of the Magic Skyway and its cave men and women?
Posted by Jim at 11:16 PM 1 comment: 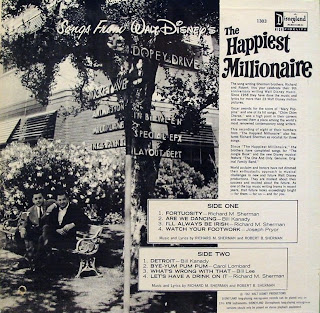 On the eve of the release (a limited release, in Los Angeles and San Francisco) of the boys: the sherman brothers' story, a new documentary created by the Shermans' sons (the Sherman Cousins, one might say), the D23 website has a wonderful salute to Richard Sherman, in which that great songwriter, historian, and human being re-visits Sound Stage 2 (where Mary Poppins was filmed) and 3C 10/11 in the original Animation Building, where the Shermans had their office in the glory days at the Walt Disney Studios. Take a look at this photo from the back of the album cover of the 1967 second-cast (a second cast including Richard Sherman) LP for The Happiest Millionaire, and you can see Richard and Robert (aka Dick and Bob) Sherman posing near the famed Mickey Avenue/Dopey Drive street sign at the studio. Then hurry over to the D23 website (it's free, you know) and reminisce with Richard.
Posted by Jim at 11:55 PM No comments: 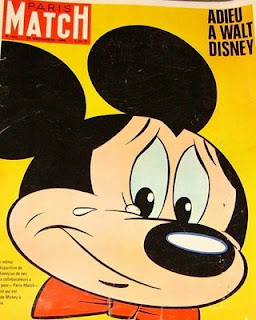 A true gentleman in the best Disney tradition, Wayne Allwine has died much, much too soon at the age of 62. As most of you already know, Wayne was the current voice of Mickey Mouse (following in the sound tracks of Jimmy Macdonald—another great gentleman—and of course Walt Disney), and was married to Russi Taylor, the current voice of Minnie Mouse, and a very sweet and talented lady. It seems appropriate to run the famed cover of Paris Match that was run in 1966 to mourn the loss of Mickey's first voice. Our hearts go out to Russi—the voice of Mickey will be replaced (though not easily) but Wayne is irreplaceable.
Posted by Jim at 1:07 PM No comments: 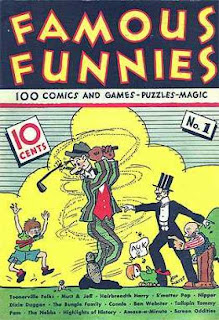 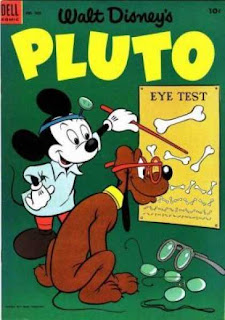 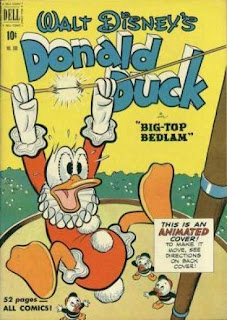 As those who watch the always-excellent TV program CBS News Sunday Morning know, May 3, 1934, marked the start of the comic-book, as the inaugural issue of the first regularly published comic book, Famous Funnies was published that day. In its report on this momentous anniversary, Sunday Morning featured some great photos of kids (and some adults) reading comics, including the two Disney comic issues (Pluto Four Color 509, October 1953, art by Dick Moores; and Donald Duck Four Color 300, art attributed to Carl Buettner) pictured here. Happy 75th anniversary of the comic book to everyone!
Posted by Jim at 11:58 PM 1 comment:

Wander Over To Wonderland 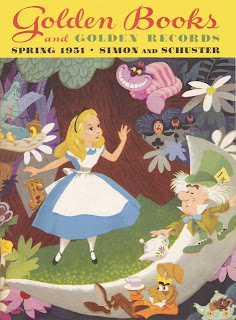 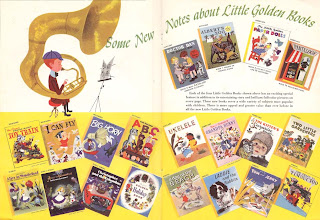 All lovers of Golden Book art in general and Walt Disney's Alice in Wonderland in general should not be late for a very important date at Matt's wondrous Wonderland blog, because that "way cool" collector has tracked down a whole bunch of vintage Golden Book catalogs (all while searching for an elusive Alice book that was announced and apparently never released). Pictured here is just a sample of the glories to be discovered at Matt's blog, so scurry on over now, and you'll find some wonders you just knew had to be somewhere in the sunny afternoon.
Posted by Jim at 12:25 AM 1 comment: 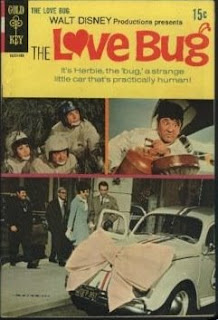 In honor of Herbie Day (today, May 3—that is, 5/3 or "53"), here's the cover of the Disney comic book of the great Bill Walsh-produced and co-written (with Don DaGradi) 1969 film. The cover of course features photos from the film; the interior comic story was drawn by former Disney story artist Dick Shaw.
Posted by Jim at 11:14 PM 1 comment: