As has become the custom here in Tulgey Wood, we are featuring the annual poster for the Macy's Thanksgiving Day Parade as an after-Thanksgiving Day treat. I scanned this out of the November 17-23, 2014, issue of New York magazine so I thought I would throw in Macy's ad/announcement/invitation that faced the poster just for good measure. 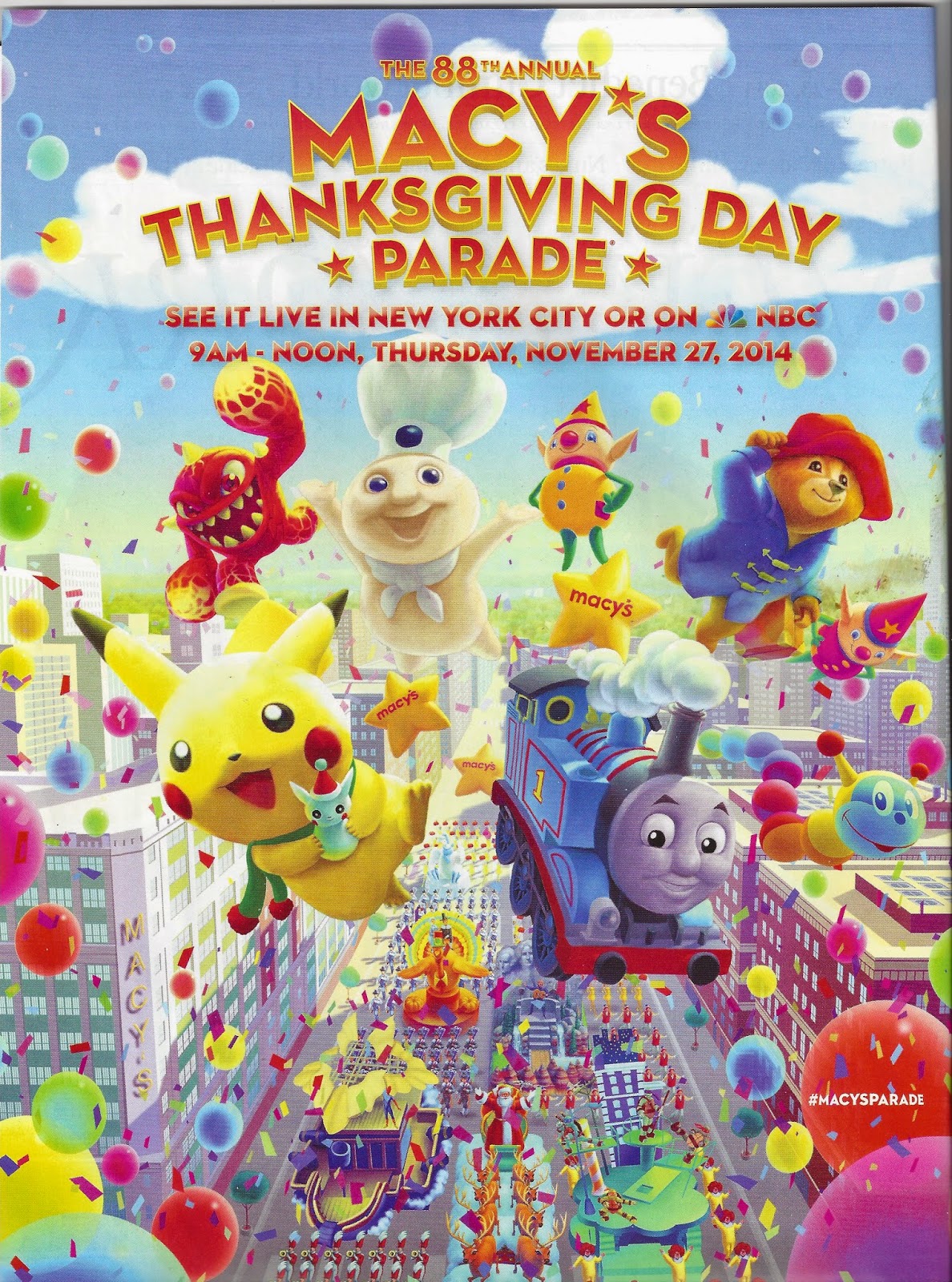 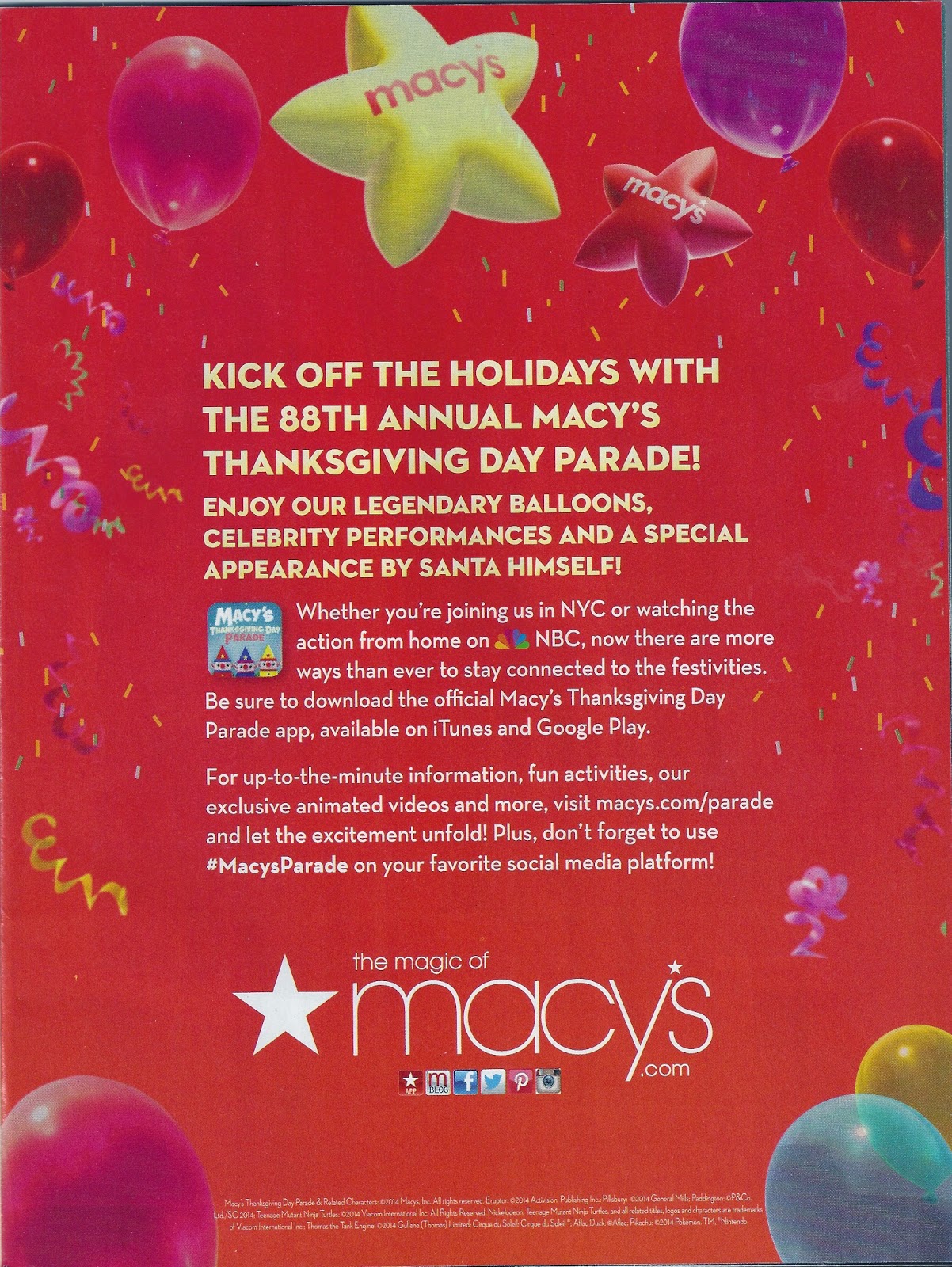 This article is part of the Fairy Tale Blogathon, hosted by Movies Silently.  Illustrating this piece are some of my favorite Cinderella images. Be sure and also read the article I wrote about Walt Disney's Cinderella at D23.com.  It's Members-Only content but you can join D23 for free at the website.

Why the propensity for perturbation when it comes to the Disney Princesses?  Though there may be a slight something to the charge that these fairy-tale royals overemphasize physical beauty, material wealth and idealized romance to the detriment of little girls, there is also something to be said about the much more important values the Princesses in general embody. Aside from being pretty in pink (or blue) these lovely lasses offer active examples of such virtues as kindness, thoughtfulness and putting the needs of others before one's own just as often (if not more often) as they dream of handsome princes and elegant gowns. 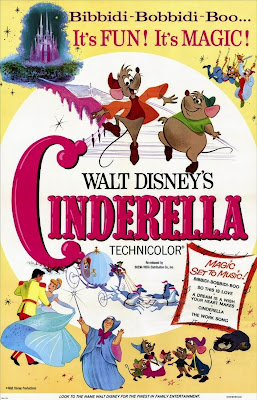 Certainly anyone who actually watches Walt Disney’s Cinderella (1950), to take one very specific example, can see in the scullery-maid-turned-princess a positive character who can be a spiritual role model for girls and boys (and men and woman) of all ages. A story of miracles, of hatred answered with kindness, of paradise restored, Cinderella can be seen as an allegory about good and evil, with virtue triumphing over injustice and cruelty.

Like many fairy tales, which many still overlook as mindless fantasies for preschoolers, Cinderella is a primal story that powerfully explores spiritual issues. Certainly the most famous of all the fairy stories, the Cinderella legend is found in some form in many cultures; there are at least 300 versions of the tale featuring a downtrodden heroine who triumphs over adversity in every language. Walt Disney based his animated version on poet Charles Perrault’s French adaptation, published in 1697. Walt was long interested in animating the richly potent tale; he produced a silent Laugh-O-gram short of the story while he was still in Kansas City in 1922. In the 1930s, a Cinderella Silly Symphony was in development. With the enormous success of his first animated feature, Snow White and the Seven Dwarfs (1937), it was only a matter of time before Cinderella became Walt’s second princess.

As carefully established in the opening narration (delivered by Betty Lou Gerson, who, believe it or not, was also the voice of Cruella De Vil in Walt Disney’s One Hundred and One Dalmatians, 1961) in the resulting animated feature, Cinderella is “abused, humiliated and finally forced to become a servant in her own house. And yet, through it all, Cinderella remained ever gentle and kind. For with each dawn, she found new hope that her dreams of happiness would come true.” This graceful (literally, full of grace) young woman who returns good for evil, has the three eternals: faith, hope and love. The disgraceful (again, literally) cruelty of her Wicked Stepmother and spoiled stepsisters do not change Cinderella; she remains her same caring self. 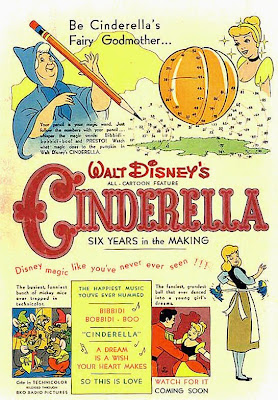 Cinderella’s love is concretely manifested in her actions toward the mice and birds who are her only friends. Her care for these humble creatures is a sign of Cinderella’s grace-filled state; she is in harmony with nature (except for the evil cat, Lucifer, who is literally named after the devil), an indication of her pre-fall Eden-esque status. Disney animation brings these humble creatures to life with such delightfully delineated personalities; even though some adaptions of this fairy tale mention that the mice who are later transformed into horses are Cinderella’s pets, I’m not aware of any other version of the cinder-girl’s story in which the animals are defined characters. Walt's skillful storytelling establishes this by the introduction of the new mouse in the house Cinderella's rescue of a new mouse from a trap, implying she has done the same for the other mice. She names (or christens, in what are many symbols throughout the film that can be seen as signs of new life at the least or overt baptismal signs at the most) the chubby new mouse Octavius (Gus, or "Gus-Gus," as Jaq calls him, for short). She also gives Gus new garments, as she has done for the other mice and birds; Cinderella, who has nothing, still finds ways to give to her friends. This supposedly simple fairy tale echoes parables such as the Widow’s Mite. 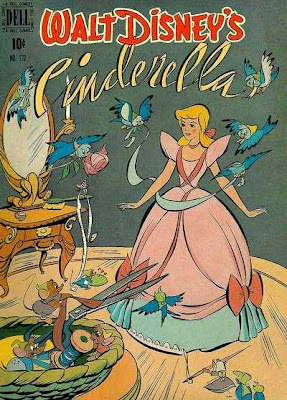 Gus, Jaq and the others return Cinderella’s love in kind. Seeing their benefactor’s heartfelt desire to attend the Royal Ball (Cinderella modestly doesn’t even think of meeting the Prince while the unworthy stepsisters think of nothing else), the mice and birds give their all to fashion a ball gown for their friend.  In a shocking act of brutality, cruelly engineered by the Wicked Stepmother, the stepsisters rip this new garment off of the girl, leaving her in rags.

It’s significant that, in this Disney version of the famed tale, it’s only after the animals act out of love for their “Cinderelly" do the heavenly powers step in, giving what Walt himself termed a “miracle” an even greater emotional wallop for the audience. Aside from the fantasy of the talking animals and the like, the only magic in the film comes in this all-important sequence. The Fairy Godmother—a being of light, like an angel—materializes out of glowing star-like sparkles and reassures Cinderella that, even though the girl is convinced her faith is broken and gone, it is that very faith that makes the Godmother's presence possible. And if there is any doubt that this Godmother represents powers on high, she pointedly says, “Even miracles take time.” 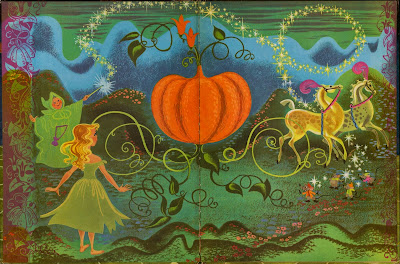 No further evidence of the spiritual punch of this animated tale—sadly dismissed by some as a mere kiddie film— is needed than the anecdote master animator and Imagineer Marc Davis shared on more than one occasion: “Somebody asked Walt what his favorite scene in all the animation that we had done and he said, ‘Well, I guess it would have to be where Cinderella got her gown.’ I think he particularly liked this scene because here the poor comes out on top.” Animation artist, Imagineer and Disney guru John Hench noted that fairy tales “all fall into a pattern, often a Biblical pattern. In the case of Cinderella, she was very high-born [and] was reduced to a kitchen maid.  This is clearly Man being kicked out of Eden.  Along comes a redeemer, a prince, and there’s always a gimmick, a key, a talisman…In Cinderella it’s a glass slipper.  And the person is returned to the former state.” 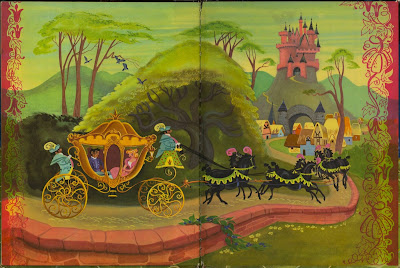 But at the end of Walt Disney’s Cinderella, the erstwhile scullery maid is more than restored—she is elevated. In this heavenly scene, Cinderella has married the prince, future ruler of this land, and with a compassionate princess— who has known oppression and poverty—at his side we can assume that this royal pair will share the kingdom’s peace and prosperity with all, ensuring that the poor “come out on top.”  But can we really be sure Cinderella lives happily ever after?  Of course, for in the happy ending of this particular princess, the meek have inherited the earth.

The Fairy Tale Blogathon starts today! Tulgey Wood is a proud participant—check back on November 11 for my contribution. In the meantime, be sure and check out the other bloggers blogging for this blogathon, hosted by Fritzi at Movies Silently. Through this blogathon I have already discovered several new-to-me blogs, including Sister Celluloid (covering MGM's 1955 The Glass Slipper, a poster for which is below) and The Last Sentence. 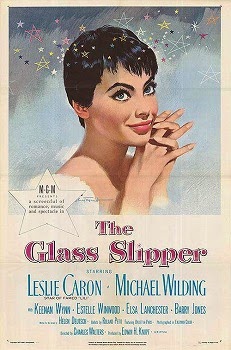 Once Upon An Upcoming Time: The Fairy Tale Blogathon

No sooner has the Countdown to Halloween blogathon ended for 2014 that it's time for another blogathon. Fritzi at Movies Silently is hosting a Fairy Tale blogathon later this month—and Tulgey Wood is one of the proud participants. Check back on November 11 for my contribution to the fairy-tale fun. 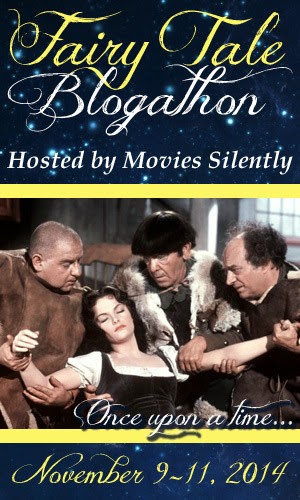 Bottom Of The Goodie Bag

Halloween would't be complete without checking the bottom of the trick-or-treat bag for one more special treat (or trick?). "The Scarecrow of Romney Marsh" qualifies as a Halloween treat because of its spooky hero, an upstanding vicar who disguises himself as a ghostly Scarecrow to fight injustice during the reign of King George III. Below is the comic book published for several issues during the Scarecrow's original ride on Walt Disney's Wonderful World of Color in 1964. Also take a look at the recent comic by Scarecrow fan and comic artist Bret Blevins that ran in the new defunct Disney Adventures magazine. And for much, much more about the "The Scarecrow of Romney Marsh," please stop by and read the article I wrote for D23.com. Be sure and check out "From the Jaws of Hell:The Scarecrow of Romney Marsh" by Jim Fanning. 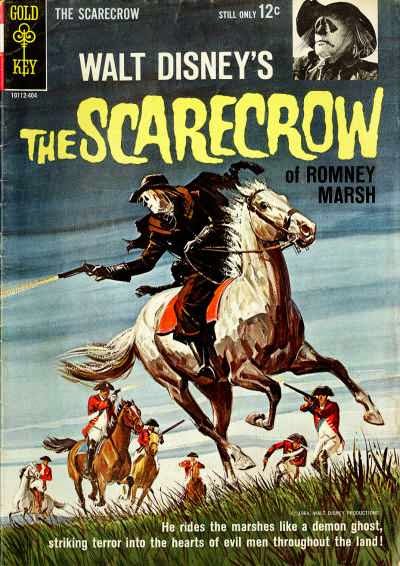 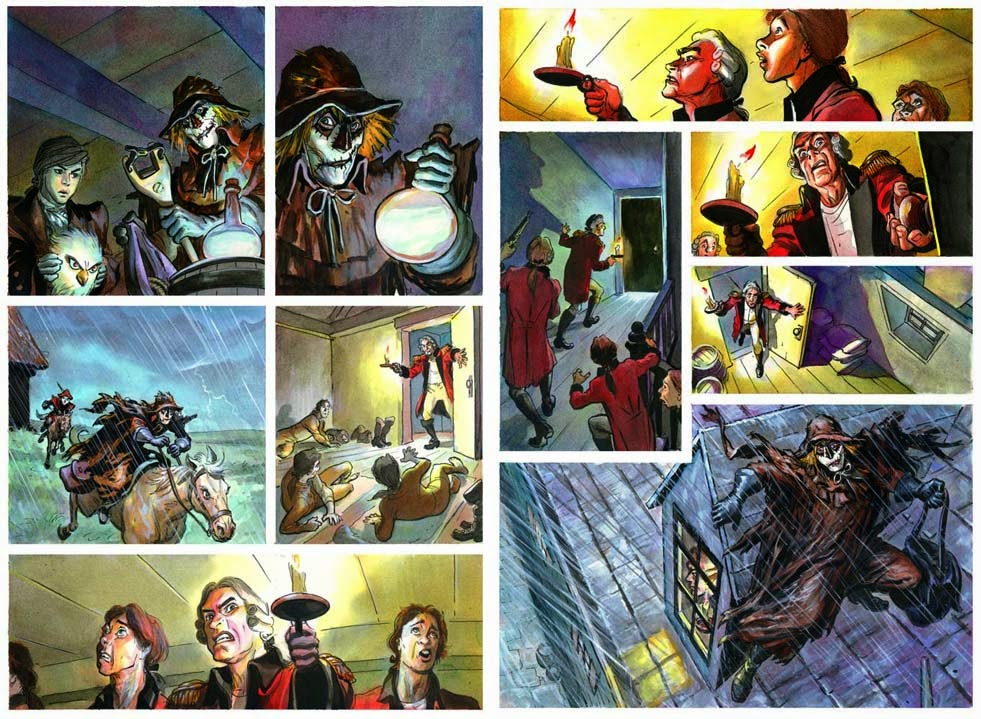