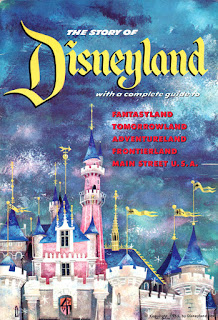 For the 60th anniversary of Disneyland Park, I wrote for D23 a galley of captions for a spectacular gallery of rare photos from the Disney Photo Library. The photos are still up on D23.com but the captions were inadvertently omitted when the website was upgraded a few years ago. So please find below the captions. The photos are here. And happy 65th to Walt Disney's Magic Kingdom.


Press Preview: July 17 was a by-invitation-only event but when these passes were counterfeited an expected audience of fifteen thousand swelled to thirty-three thousand attendees who stormed the just-opened gates. Incredibly, the “guest list” was actually even vaster; thanks to the Dateline DisneylandTV special, telecast live on ABC, the whole nation was also invited to join in the festivities.

Art Linkletter: Awaiting the arrival of Walt Disney at Main Street Station with his children, TV personality Art Linkletter emceed the live Opening Day broadcast, along with movie star Bob Cummings, and TV and film actor (and future President of the United States) Ronald Reagan.  A friend of Walt’s and already a veteran of live television, Art took the miscues and glitches of this unprecedentedly complex telecast with humor and aplomb.

Walt arrives: Railroad enthusiast Walt arrived at Main Street Station for the official dedication of his sparkling new Magic Kingdom in style: at the controls of the E.P Ripley, engine No. 2, accompanied by (from left to right) the train conductor, Santa Fe Railroad president Fred Gurley, and California Governor Goodwin J. Knight. Also aboard: children of the foreign counsels located in Los Angeles, honored guests for this once-in-a-lifetime event.

Governor Knight: Walt Disney, dignitaries and guests listen as Governor Knight praises the newly opened park as "a wondrous community with all the charm of the old world and all of the progress and ingenuity of the new world." An estimated 90 million viewers also listened in—making Disneyland Park’s Opening Day one of the biggest bashes in history.

Flag raising: As the National Anthem played, representatives of the U.S. Armed Forces raise the stars and stripes above Town Square. Television coverage of the Opening Day ceremonies incorporated 29 cameras at a time when the average was three or less, sixteen miles of cables on loan from television stations as distant as Chicago, with signals fed through five multi-monitor control rooms.

4:45 pm: “To all who come to this happy place: Welcome. Disneyland is your land.” At 4:45 pm  on July 17, 1955, Walt Disney officially proclaims the now beloved words dedicating Disneyland Park “to the ideals, the dreams and the hard facts that have created America with the hope that it will be a source of joy and inspiration to all the world.” Among the dignitaries participating in the dedication ceremony is Reverend Glenn D. Puder (Walt’s nephew), who offered the opening invocation.

Davy Crockett: Riding straight out of Walt Disney’s television phenomenon, Fess Parker as Davy Crockett and Buddy Ebsen as Davy’s sidekick, Georgie Russel, are among the biggest stars of the Opening Day parade. Also in the parade’s Frontierland unit: Frank Clement, Governor of Tennessee. After all, Davy was “born on a mountain top in Tennessee, greenest state in the land of the free.”

Native Americans: Each section of the Opening Day parade celebrated one of the Disneyland realms, such as Frontierland. Native Americans performed authentic dances at the Indian Village, a Frontierland mainstay from 1955 through 1971.

Bob Gurr: Actor Don DeFore from the ABC comedy series The Adventures of Ozzie and Harriet rides in the parade in an Autopia attraction vehicle, with Imagineer Bob Gurr in the driver’s seat.

Tomorrowland on parade: The Autopia cars from the “super highway of the future” were a big part of the big parade. Look closely and you’ll spot one of the many hydraulic forklifts utilized to raise the era’s enormous television cameras for wider views.

Bob Gurr 2: Just a few days before Opening Day, Walt Disney said, “I want to pay tribute to the many studio artists, craftsmen and engineers whose untiring efforts helped bring this dream in to a reality.  Without their skills and imagination, Disneyland would not have been possible.” How appropriate then that Imagineers such as Bob Gurr were involved in the festivities. And how appropriate that Bob drove this particular vehicle in the parade—after all, he designed the Autopia cars.

Fantasyland on parade: Bold knights and their noble steeds lead the Fantasyland pageant. The Opening Day parade was the first in a grand Disneyland tradition. Since 1955, dozens of parades, pageants and processions have marched down Main Street U.S.A., including the latest spectacular: Paint the Night, specially created for the Disneyland Diamond Celebration.

Mouseketeers: The Mouseketeers make their first public appearance at the Disneyland Opening Day parade: Karen and Cubby are ready to step off in the foreground, with Annette just behind. The Mickey Mouse ear hats introduced by the Mouseketeers are the most popular Disneyland souvenirs of all time, with more than 84 million “ears” sold since 1955.

Ronald Reagan: Co-host Ronald Reagan prepares to welcome television viewers to Frontierland, where the gate of the stockade— made from Ponderosa pine logs—are about to be officially opened for first time

Dance: A rare color shot from this TV special, broadcast in black-and-white, the Frontierland dancers, kicking up their heels to “Old Betsy,” a musical paean to Davy Crockett’s trusty rifle.

More Mouseketeers: MouseketeerRoll Call, sound off now! For the first time, the young stars of the Mickey Mouse Club TV series (premiering on ABC in October 1955) perform for television audiences in Fantasyland as an Opening Day highlight, performing the “Talent Roundup” song.

Castle: From the start, Sleeping Beauty Castle was the symbol of Disneyland. Inside the castle’s courts are such attractions as the now-famed “dark rides” such as Peter Pan’s Flight, one of the park’s 18 Opening Day attractions. Today, as Disneyland celebrates its Diamond anniversary, the park offers more than 60 attractions.

Young guests: “Open the Fantasyland castle in the name of the children of the world!” the storybook knight proclaimed— and the Sleeping Beauty Castle drawbridge was lowered for the first time to welcome these lucky youngsters on July 17, 1955.

Fantasyland: Early ads promoting the opening of Disneyland referred to the new park as “The World’s Most Fabulous Wonderland”—and nowhere in Walt Disney’s Magic Kingdom is that wonder more evident than in Fantasyland.   Nearly thirty years later, these children—and their own children—were invited back to Disneyland to be the first to enter the New Fantasyland in 1983 when the drawbridge was lowered for the second time.

Disneyland In Art And Image

Over the years, Whitman (an imprint of that "golden" company, Western Publishing) issued an assortment of coloring books celebrating Walt Disney's Magic Kingdom. This particular publication from 1975 features a mosaic of photos as opposed to the artwork that traditionally illustrated the Disneyland covers, as in the example posted about back here. The photos are well-chosen  (not sure exactly what Chip 'n' Dale are up to, but it sure is fun) and dynamically arranged, especially with that "World on the Move," Tomorrowland, dominating as both the top third and the background. And to really make things interesting, the view of the Monorail, Matterhorn and Submarine Voyage is, in fact, a painting, It all makes for a spirited glimpse (click on the image for a larger view) of Disneyland U.S.A. just six years after the Haunted Mansion (prominently featured on the left) first creaked open its gates. 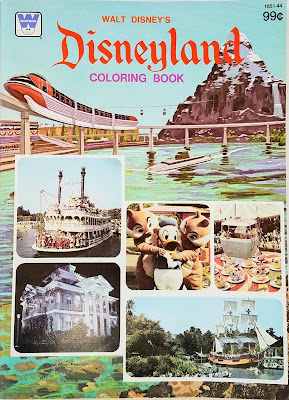 Here's a treat just for St. Patrick's Day: "The Magic Shillelah," the first episode of The New Adventures of Huckleberry Finn, made its debut in Living Color on NBC, right before Walt Disney's Wonderful World of Color. Leprechauns are on the loose, looking for their lost shillalah. This "wee folk" episode was not the first produced—it was actually the 14th episode produced. So why would Hanna-Barbera choose this installment to kick off their expensive new series? For one thing the setting is often very lavish and colorful, at least compared to several other episodes, each of which has its own style of art direction. Then features song and dance, including a dance with LuAnn Haslam as Becky Thatcher performing an Irish jig. Finally, this episode and no other features a "name" voce artist: Dennis Day, well known from The Jack Benny Program, as leprechaun Buck O'Grogan. Whatever reason this episode was selected to serve as the premiere, it's a St. Patrick's day delight. (Interestingly, NBC reran this episode on March 16th, 1969.) You can see it on the The New Adventures of Huckleberry Finn DVD. 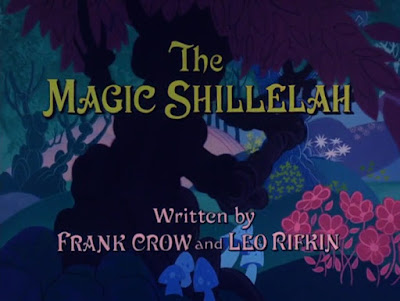 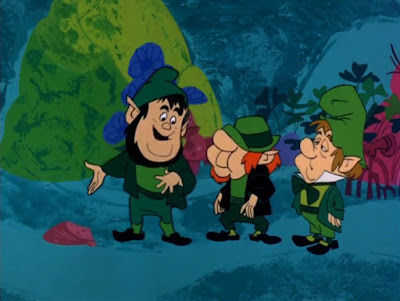 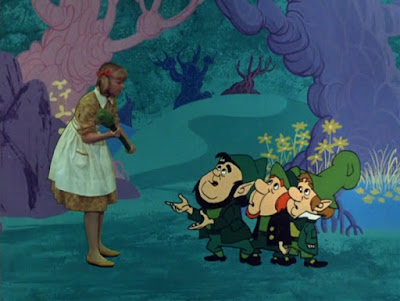 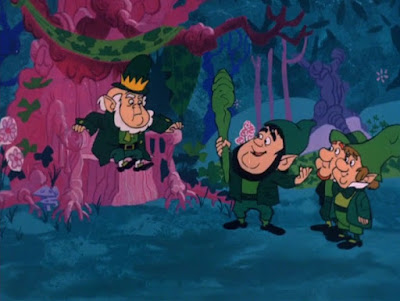 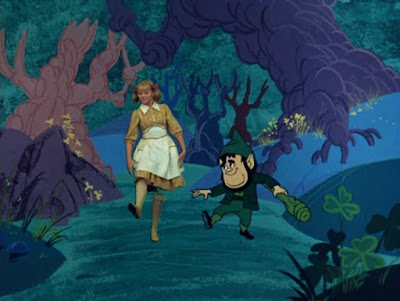 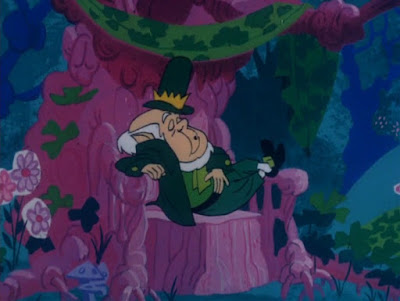 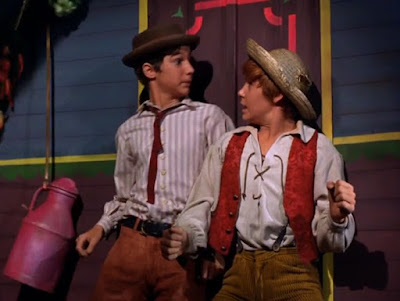 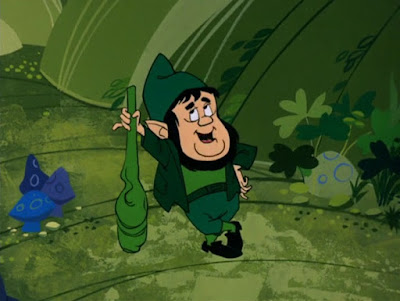 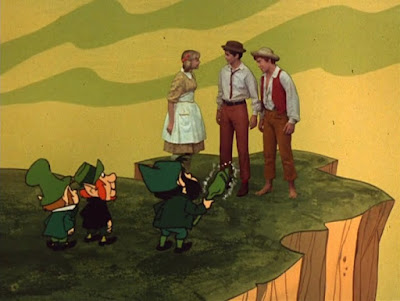 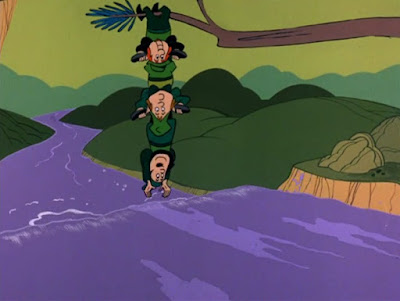 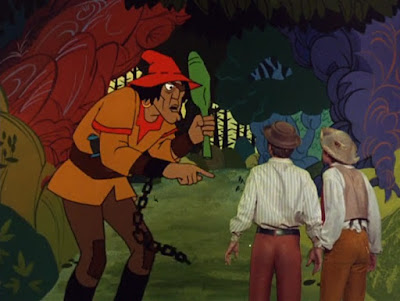 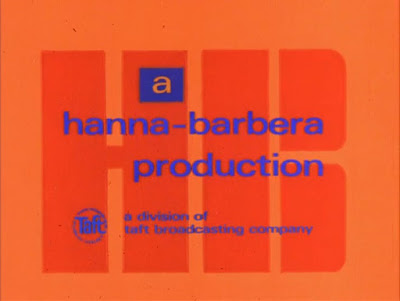 Miss Minnie Explains It All For You

Even if they have never seen it in person, just about everyone knows the Hollywood sign. This world famous sign has quite the fascinating history—but don't take my word for it. Below is Minnie Mouse with the story behind the sign. This is "Minnie Mouse in Hollywood," a series of articles published in many issues of Walt Disney Comics Digest #18, December 1969 (probably to ensure lower postal rates for subscriptions). Enjoy this bit of Hollywood history, thanks to one of Hollywood's most enduring stars. 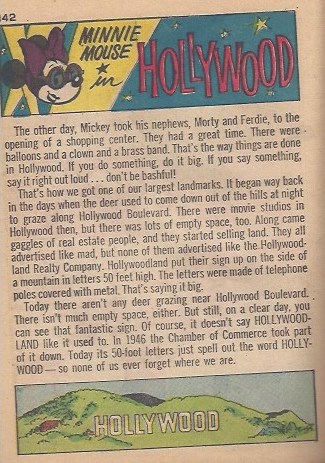 In The Know About In The News

Honored with a Peabody Award in 1976, In The News is the legendary CBS News broadcast that was interspersed with the network's more traditional Saturday morning programming from 1971 through 1986. Reported by Christopher Glenn, this fondly recalled series of two-minute current-event broadcasts (five different reports aired each Saturday) offered solid TV journalism in the CBS News tradition. But what's little known is that In the News began as In the Know, a similar series of reports that aired on CBS Saturday mornings during the 1970-1971 season. Apart from the focus being general information rather than hard news, the main difference between the two series of reports is that In the Know was hosted and narrated by characters from Josie and the Pussycats, new on CBS that season. The Fall 1970 comic book ad below(click on it for a larger view) heralding the new CBS Saturday A.M. season gives a few "funtastic" details, while also emphasizing that this educational element was an important priority of the Saturday morning lineup on CBS. 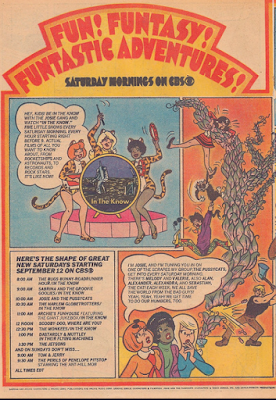