Just who is Francis Phillip Wuppermann, you may ask? You don’t have to gaze into Professor Marvel’s crystal to divine that Francis Phillip Wuppermann is the birth name of Frank Morgan. Though the beloved character actor may never have known the crowned heads of Europe, his humorous, heartwarming performances in many a golden-age movie (mostly for Metro-Goldwyn-Mayer, his home studio), where, as the title character in MGM’s timeless 1939 classic, he attained motion-picture immortality as Oz, the First Wizard deluxe. Though The Wizard of Oz was not considered his greatest film triumph at the time (none of his 1949 obituaries even mention it), today it is the only film in which he appeared from which most people know this prolific character player. Say what you will about James Franco as the most recent reincarnation of the Wizard (Too much of a 21st century boy to play the Wizard? The box office business done by Disney’s Oz The Great and Powerful belies such objections), he is probably one of the few bankable young actors who knows who Frank Morgan—and his accomplishments beyond Oz—is. In addition to enhancing many hit films such as The Great Ziegfeld (1936), Boom Town (1940) and The Human Comedy (1943), Frank was twice nominated for an Academy Award—as Best Actor for The Affairs of Cellini (1934) and as Best Supporting Actor for Tortilla Flat (1942). (Frank is pictured below with the other Oz leads, sporting the top hat he only holds, never wears, in the film itself.) So the next time you see The Wizard of Oz, take time to also seek out some of the other films (shown frequently on TCM) of Francis Phillip Wuppermann. 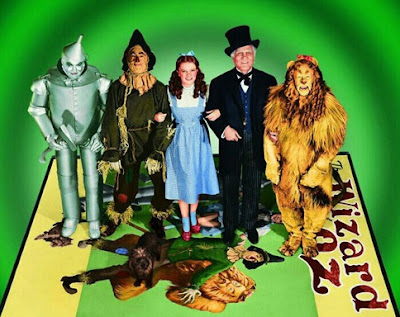 In honor of this Independence Day, here's the 45 rpm record cover for the songs from Walt Disney's  Johnny Tremain (1957). Even though "The Liberty Tree" is heard as a vocal in the film and has become a somewhat familiar Disney song, the film's theme song is not sung in the movie; it's only heard as part of the movie's score. The songs were written by the film's composer George Bruns (the orchestra and chorus for this recording were conducted by George Bruns) and its screenwriter Tom Blackburn. This follows the pattern of "The Ballad of Davy Crockett," which was written at Walt Disney's request by the same duo from the "Davy Crockett" shows, composer (Bruns) and writer (Blackburn). If only the Johnny Tremain songs were as popular as the "Davy Crockett" theme—they deserve to be. You can easily find these songs online to listen to—you already have "The Liberty Tree" permanently embedded in your brain cells and once you hear "Johnny Tremain"—well, let's put it this way, you'll "remember his name." In the meantime, check out the article I wrote about Johnny Tremain on the new-and-improved D23.com. Happy Fourth! 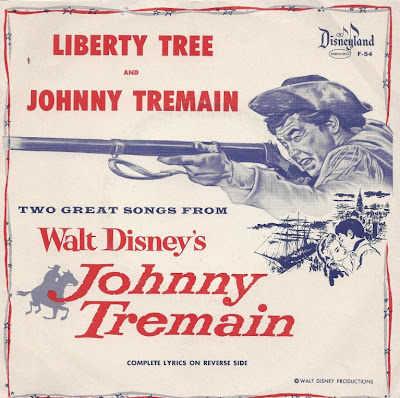 Disney releases its version of The Lone Ranger today, and already its being attacked for, among things, being too bizarre. But there was another version years ago, an animated version created for CBS as part of their all-new animated superhero Saturday morning block in 1966. Produced by Herbert Klynn and Jules Engel and their famed Format Films, the show reflected the graphic proficiency of its producers, with stylish designs and distinctive scratchy ink work (actually chinagraph pencil) on the cels. The show was credited as a Jack Wrather Production (Jack for many years held the rights to The Lone Ranger; he may be best known to Disney enthusiasts as the creator/owner of the Disneyland Hotel until 1989, resulting in he and his wife Bonita Granville Wrather being named Disney Legends in 2011). The animated Lone Ranger ran on CBS from September 10, 1966, to September 6, 1969.  The evocative narration ("a man who became a legend...a daring and resourceful man who hated thievery and oppression. His face masked...his true name unknown...with his faithful Indian companion at his side, he thundered across the West on his great white stallion, appearing out of nowhere to strike down injustice and outlawry...and then, vanishing as mysteriously as he came") was spoken by Marvin Miller, who among his many other credits was the narrator for UPA and Walt Disney's Sleeping Beauty (1959). As opposed to the live-action TV show this animated version had the Lone Ranger and Tonto battling not bandits and desperadoes but rather aliens, monsters and mad scientists—much like CBS's prime-time live-action western/sci-fi/fantasy/steampunk series, The Wild Wild West, which had premiered the year before. Below are model sheet details from this utterly unique and unfortunately all-but-forgotten cartoon gem. 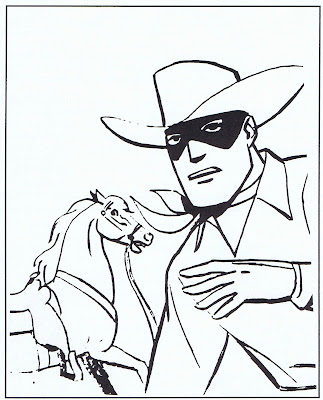 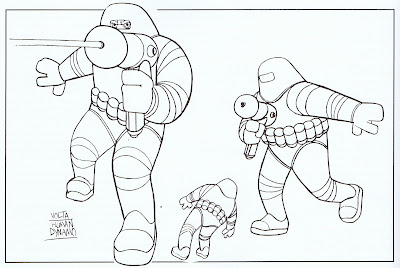 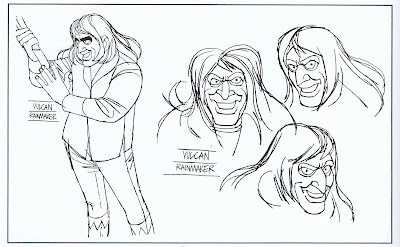 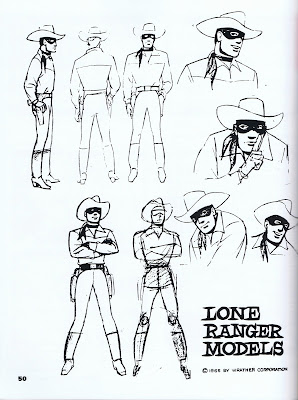