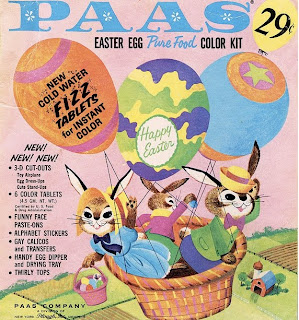 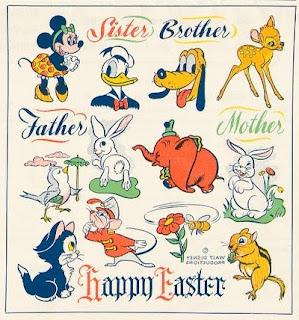 During many periods of its history, the Paas Easter Egg Coloring Kits have boasted some wonderfully whimsical art, including the charming illustration on this box (left) from the 1960s. The brand name "Paas" was chosen by the late-1800s inventor of the original Easter egg dye, William Townley of Newark, New Jersey, from “Passen,” the word that his Pennsylvania Dutch neighbors used for Easter. ("Passen" from "Pasch" used for both Passover and Easter.) Over the years, Paas has also licensed Disney characters and art, as in the second image at left of transfer art (used to decorate the colored eggs) featuring Mickey, Minnie, Bambi and other Disney favorites from Easter 1944. Happy Easter (make that Happy Pasch)!
Posted by Jim at 9:50 PM No comments:

Considering The Lillies Of The Field For Easter 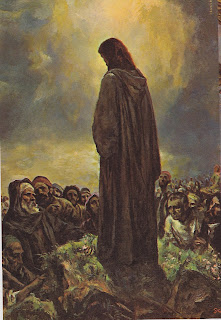 Here is another evocative painting from the "program" (actually a hardcover book) for MGM's epic Ben-Hur. Ben Stahl—an acclaimed artist and illustrator for such publications as Esquire and The Saturday Evening Post who used layered and glazed acrylics and oils to striking effect— was commissioned by MGM to paint several pieces as a promotion/celebration of their screen spectacle. Included in the series of paintings was this powerful portrayal of the Sermon of the Mount. The painting's staging is consistent with the portrayal of Jesus in the film, for Ben-Hur famously never shows the face of the Christ; instead, the audience is most often shown only the back of Jesus, portrayed by the uncredited Claude Heater. (The 1902 stage version of the story took an even more stylized approach by portraying Christ with only a beam of light.) Though this dramatic artwork does not specifically portray a Resurrection scene, its simple yet dynamic beauty is more than appropriate for Easter Sunday.
Posted by Jim at 12:22 AM No comments:

A New Issue Is On Its Way In May 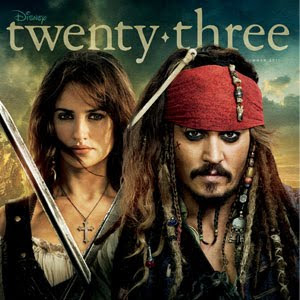 May 3 will find the Summer Issue of Disney twenty-three magazine on the stands. Featured is a cool article about Stan Lee getting all "Excelsior" about Marvel joining forces with Disney ('nuff said!), a talk with George Lucas, and of course my latest "A Walk with Walt" column, continuing the story of Walt Disney through 1940. Look for this official magazine of D23 at Borders, Barnes & Noble, Disney Stores and at Disneyland and Walt Disney World on May 3—and look for more info here.
Posted by Jim at 1:31 AM No comments:

To celebrate this solemn day, here is a piece of art created for the "Making Of" book all about MGM's Ben-Hur (1959). To call this hardcover book (published by Random House) a "program" is akin to calling Ben-Hur itself a slideshow, but this volume was issued in 1959 in conjunction with the film's first theatrical release, and was sold in the lobbies of the theaters showing the film in its roadshow presentation. (I wonder if the "program" was also sold in bookstores?) Part of this deluxe volume is a series of beautifully rendered artworks, perforated and "suitable for framing," which as the book states, are illustrator Ben Stahl's conceptions of scenes from the epic film. Being "A Tale of the Christ," Ben-Hur features a dramatic portrayal of the crucifixion, and Stahl's powerful painting captures its drama with an emotional punch. (Since Ben-Hur focuses on reactions of witnesses to this public execution, so does the painting.) Believe it or not, Disney fans, there's a Disney connection: Ben Stahl wrote (and illustrated) the 1965 book Blackbeard's Ghost on which Walt Disney's 1968 film was based. 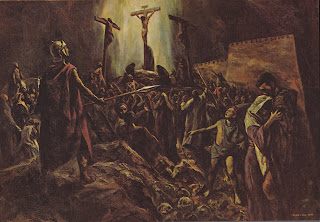