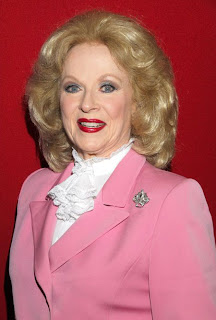 Wonderful things happened to me at the wonderful D23 Expo, especially a wondrous chance to talk with my friend Mary Costa. As visitors to Tulgey Wood certainly already know, Mary is the voice of Princess Aurora in Walt Disney's Sleeping Beauty. Mary was only 19 when she was cast in that role so voicing Briar Rose was only the beginning for this incredible talent who became an international opera star, who personally knew at least two First Ladies from Eleanor Roosevelt (of course she was a former First Lady when Mary knew her) to Jacqueline Kennedy, and who performed for and worked with everyone from Stravinsky to Bing Crosby. The eternally youthful Ms. Costa graciously greeted all her many fans wherever she went at the Expo, and in fact, Mary tirelessly signed autographs into the wee hours after the 10:00 PM screening of Sleeping Beauty. On another occasion, knowing she had seen the special screening of the first 30 minutes of The Princess and the Frog, I asked Mary what she thought about Tiana, the new Disney princess, and she aid how much she loved this new addition to the fold, and that she thought the film was sure to be a big hit—imagine hearing that assessment from a bona fide Disney princess. Aside from that, Mary expressed her unabashed enthusiasm for the Princess and the Frog character of Charlotte LaBouff, the delightfully spoiled Southern belle. An authentic Southern belle herself (but of the decidedly unspoiled variety) who was born in and now lives in Tennessee, Mary declared the character adorable, adding, "I know people like that!" All of this, of course, spoken in her lilting voice, so full of color—the very colors which led Walt to cast her as his sleeping beauty. That's Mary Costa, true Disney royalty.
Posted by Jim at 5:53 PM No comments:

At Last, The Lucy Show 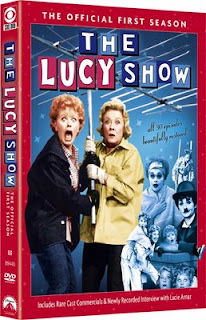 Tulgey Wood includes all manner of madness, and that certainly covers the particular madness for which Lucille Ball is so celebrated. I am a fan of I Love Lucy and all that went into its making, and so of course I'm thrilled that this ultra-classic TV show is now available in its entirety on DVD, including the rarely-seen hour-long continuation of I Love Lucy, The Lucille Ball-Desi Arnaz Show. But as much as I love I Love Lucy, I have always also loved The Lucy Show. I (and many other Lucy Show fans) have been longing for a DVD release of Miss Ball's underrated but excellent follow-up, which had many of the same qualities—and much of the same quality—as her first smash show—and no wonder, as it was written and produced by many of the same people, including executive producer Desi Arnaz. Though the show would later devolve (with the loss of Lucy's longtime writers, the true geniuses behind the Lucy throne) into a shallow and unfunny star-of-the-week mess, the first two-and-a-half seasons of the show are charming and hilarious, especially as they co-star that great actress and comedienne (and I Love Lucy alumna) Vivian Vance. Together, Lucy and Viv work together brilliantly, performing like a female Laurel and Hardy. Luckily for all fans of The Lucy Show—and all the Lucy fans who have yet to discover it—the first (and best) season of this gem was released on DVD (complete with plenty of great extras, including original openings, cast commercials, interviews and much more) on July 21. According to CBS DVD, they have never had as many requests for any other TV show as they have had for The Lucy Show. Go here to see a delightful letter-to-Lucy-fans explanation of the DVD release, inspired by The Lucy Show's credit crawl featuring animated versions of Lucy and Viv.
Posted by Jim at 1:50 AM No comments:

Big Bang Is Back, On TV And In The Comics 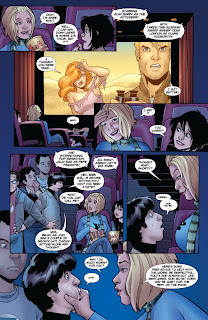 As most of you already know, this past Monday, September 21, brought The Big Bang Theory back for a third season on CBS. What you may not know is that the four comic-book loving geeks—make that geniuses—also make an appearance in a comic book now on the stands. In the October issue (no. 4) of Power Girl, written by Justin Gray and Jimmy Palmiotti and drawn by Amanda Conner, the Big Bang boys make a cameo appearance, as you can see in the page pictured to the left. It's entirely appropriate that the male stars (sorry, Penny) of the show appear in this context, not only because the geeky guys are funny-book freaks but also because Power Girl is published by DC, which is owned by Warner Bros., which produces The Big Bang Theory. Now that's synergy of a very fun kind. For more Big Bang fun, check out Ed Squair's (who has already posted about the Big Bang-Power Girl crossover) report on the show's presentation at this summer's Comic-Con.
Posted by Jim at 2:55 AM 1 comment: 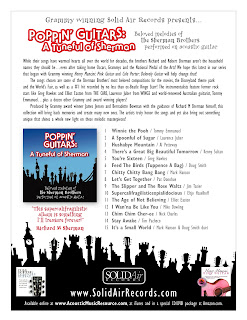 One of the best presentations at the spectacular D23 Expo (September 10-13, 2009) was the screening of the new documentary about the Sherman Brothers, The Boys. Congenial host, Disney historian and friend-of-the-Shermans Tim O'Day welcomed the film’s directors Jeff and Greg Sherman (the Sherman Cousins) and the great Richard M. Sherman himself, who played songs and told stories as only he can, which is to say in a most delightful way. Also on hand were two accomplished guitarists from the new Poppin' Guitars: A Tuneful of Sherman album: Laurence Juber who treated us to a lively cover of “A Spoonful of Sugar” and Doug Smith, who played a haunting rendition of “Feed the Birds.” Produced by my friends Bernadette Bowman and James Jensen, this unique and highly recommended recording (click on the above image for more info) presents favorite Sherman songs played in the undiluted beauty of the acoustic guitar. These wonderful and “pure” performances bring out the simple (but never simplistic) beauty of these beloved melodies; it’s almost as if one had never heard them before. You can get your own copy (complete with a companion DVD) at Amazon.com.
Posted by Jim at 3:45 AM 1 comment: 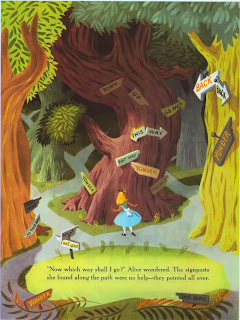 Hard to believe but today marks the 2nd anniversary of madness and merriment here at Tulgey Wood. Just like Alice, I’m sure you’ve been wondering as you have been wandering—wondering why so few posts at this here blog lately, that is. At the two-year point, things are plenty busy with projects, some of which I will soon be telling you about. So stay tuned to Tulgey—the posts may be fewer and farther between, but there’s definitely more madness ahead. To celebrate two years of Tulgey Wood here’s a wonderful Wonderland illustration from the glorious Big Golden Book by Golden great Al Dempster.
Posted by Jim at 5:17 AM No comments: 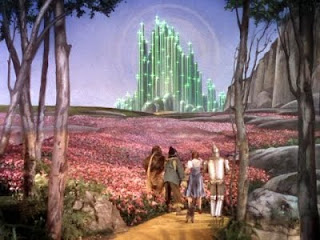 Will you be in the City tomorrow—New York, not Emerald? The Empire State Building will take on a glorious green glow tomorrow as part of the celebration of the 70th anniversary of the MGM version of The Wizard of Oz. Entitled The Wizard Of Oz's 70th Anniversary Emerald Gala, this incredible celebration is a culmination of the Warner Bros. (which now owns this gem of a film) celebration of The Wizard of Oz. (You can find out more about the festivities here.) There’s been a dearth of posts about that classic movie (truly a classic among classics) here in Tulgey Wood but stay tuned—there is plenty more Wizard waiting in the wings.
Posted by Jim at 4:58 AM No comments: