A View Of the Peanuts Voices

'Tis the season for the classic Peanuts TV specials so here, thanks to TV Guide, is a look at the kids (along with Peanuts animation director Bill Melendez as the"voice" of Snoopy) who performed the voices for He's Your Dog, Charlie Brown (1968).  Included are Peter Robbins and Chris Shea are the original voices of their respective characters, having originated the vocal roles even before A Charlie Brown Christmas in the Ford commercials of the early 1960s. I like the way TV Guide had the actors mimic the facial expressions and physical attitudes of the animated characters. (Peter Robbins expression in the color photo is especially good—you can really see, as Andy Griffith might say, the actor in the man, er, boy.) The talents of these young actors are one reason the special as featuring their voices are so outstanding—they weren't simply kids cast to get a certain sound, Peter and Chris were actually actors with true performing skill. Just think of  Linus proclaiming the Gospel's Nativity story or Charlie Brown saying, "I got a rock,"and you'll see—and hear—why their original vocalizations remain the gold standard. 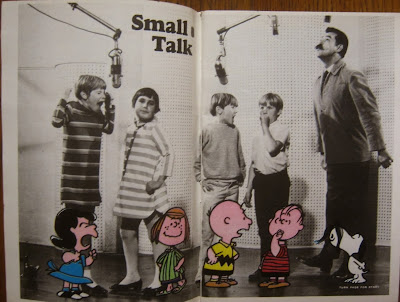 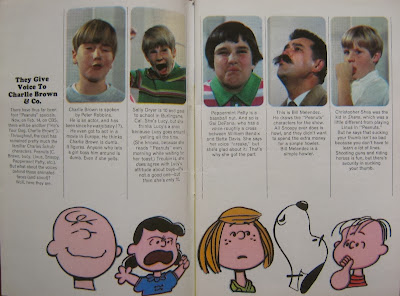 Thanks for sharing, this is great. It's fun to see the people responsible for the voices.