It's now Christmas Day, and to celebrate here's the View-Master set retelling the story of Birth of Jesus. This unique set, while covering the same territory as the View-Master set entitled The Christmas Story, stages the scenes with costumed actors. The scenes were created and photographed by Church-Craft Pictures, Inc., and reportedly Hollywood's favorite Biblical epic director Cecil DeMille actually directed at least some of the three-dimensional tableaux. Originally produced in 1947, this timeless View-Master set was in print for decades, and apparently still is available. Merry Christmas, everyone. 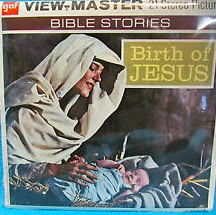