On December 22, 1968, Walt Disney's Wonderful World of Color featured a 40th birthday salute to Mickey Mouse, more than a month after the big day—November 18—itself. As reported in this TV Guide article, the Disney anthology episode was produced by Ward Kimball, "a Disney animator since 1934." The article also notes that Ward was surrounded by vintage Mickey memorabilia but what it doesn't mention is that the collection belonged to Ward, who collected Disney merchandise long before it was fashionable (or profitable). In fact, Ward obtained his Mickey merchandise when it was first issued, in the 1930s. As the uncredited writer reports, the celebratory Mickey was "in" thanks to a renewed interest in Mouse merchandise, especially the famous Mickey watch. It was considered "camp" according to this article, but the "mod" status of Mickey went far beyond, central to the ignition of the nostalgia craze that blazed in the 1970s and in a way continues to this day.  Why wasn't this show "colorcast" closer to the actual day of Mickey's birth?  The date on which it actually aired clues us in that this very special episode was the Wonderful World of Color's Christmas offering for 1968. (And also Disney wasn't certain of the exact date of Mickey's debut unto Disney Archivist Dave Smith nailed it down in the 1970s.) Enjoy this article (below; click on each image for a larger view) about "The Mickey Mouse Anniversary Show," and stop by again for more Mickey Mouse all this month. 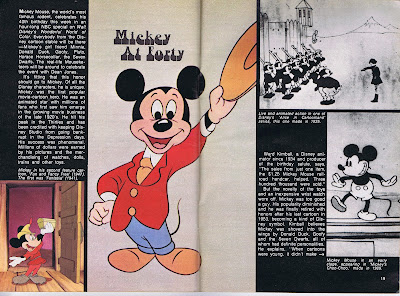 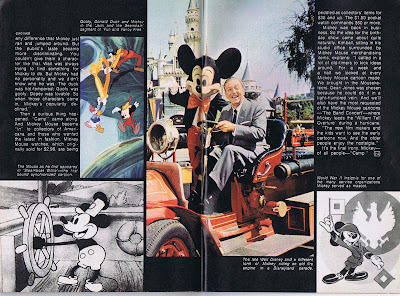