It's Mickey Mouse Month here in Tulgey Wood—and today's the big day. It's Mickey's birthday, or more accurately the anniversary of the debut of the Mouse's first cartoon release, Steamboat Willie, on November 1928.  To celebrate, here's the sheet music cover—complete with art of the birthday boy (and girl) drawn by Mickey's designer and first animator, Ub Iwerks—of Mickey's first theme song, "Minnie's Yoo Hoo," composed by Disney's then-music maven Carl Stalling (who went onto a brillaint career as composer of Warner Bros.' Looney Tunes cartoons). For the "Mickey Mouse Anniversary Show" TV show I mentioned in yesterday's post, producer Ward Kimball found, as he put it,  a “wild little tune in Mickey’s Follies, a 1929 short in which the principle action is a barnyard review. The song was great.  It had wonderful antiquey, tinny quality about it. Then I realized that it had been our official Mickey Mouse song in the early thirties.  These were clubs organized by theatres for special Saturday showings for the kids.  We had badges and membership cards, our own greetings and code of behavior, secret handshake and this tune was our club song." [Ward himself led a marching band of Mickey Mouse Club members on Saturdays at Santa Barbara's Fox Arlington Theatre before being hired at the Walt Disney Studios in 1934.] "But I couldn’t remember the [song's] title. With a little sleuthing, we learned that Carl Stalling had written it.  He had been a songwriter, gagman and musician in the early days.  He still lived near the studio so I called him.” [It's fascinating that in his account of this meeting with Stalling, Ward never mentions Carl's decades-long Warner Bros. career—although the fact that this was all reported via Disney studio publicity might have something to do with it.] “What do you want with that old thing,” Carl Stalling, then in his 70’s, replied, according to Kimball,  when Ward contacted him about the song. “It’s called ‘Minnie’s Yoo Hoo’ and was written for Mickey’s 10th picture. I just made it up. Nothing special about it.” The song was of course special to the many children who belonged to the Club. When publicity on Mickey’s 40th birthday began, Disney received hundreds of letters from people who were Mouse Club members during the Great Depression., and many of the letters mentioned “Minnie’s Yoo Hoo.”  One letter from Chalmer Wire, the Fire Dept. Chief of El Monte, California, listed all the lyrics accurately, writing that “the high point of our afternoon cartoon time was singing our Mickey Mouse song." Ward fell in love with the song (he had it on a tape recorder in his office during production of the "Anniversary Show," and played it for all visitors, according to Studio publicity), Ward included “Minnie’s Yoo Hoo” in the “Anniversary Show” for the sequence showcasing . In 1972, as producer and director of the syndicated TV series The Mouse Factory (a sort of Disney Laugh-In, the show was created to capitalize on the nostalgia craze and on Mickey's "in" status), Ward used "Minnie's Yoo Hoo" as the show's theme song, bringing what is perhaps the first original Disney song to gain a mass popularity to a whole new audience. (And though the sheet music cover doesn't include credits, the song's lyrics were contributed by a little known lyricist named Walt Disney.)  Be sure and stop by Tulgey Wood all through November, there's more Mickey ahead. 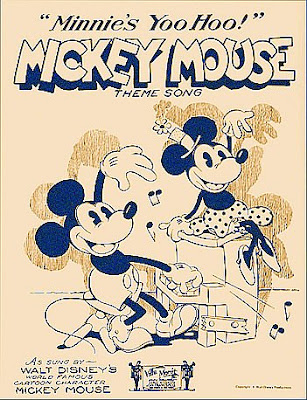