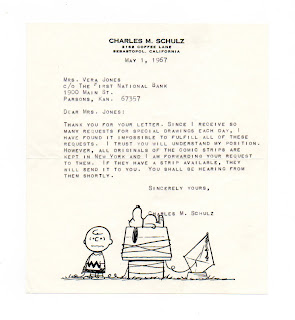 Today, October 2, 2010 marks the 60th anniversary of the comic strip that surely needs no introduction, Peanuts, for it was on this date in 1950 that the initial entry in what would become a worldwide phenomenon was first published in a mere seven newspapers, a marked contrast to the 2,000-plus papers in which the comic would eventually appear. To mark the occasion, here's a rare bit of art—a 1967 letter sent out by comic-strip artist/writer par excellence Charles M. Schulz in response to a fan apparently requesting original art. It would be interesting to know if Mrs. Jones of Parsons, Kansas ever received an original strip from United Features Syndicate. Anyhow, I hope you enjoy this example (click on the image for a larger view) of special art created by Schulz outside the strip itself as we celebrate sixty years of happiness with Peanuts.
Posted by Jim at 5:30 AM

This is awesome, Jim! What a cool letter to see. (I guess this is before people used all caps to imply they are YELLING!)
:-)