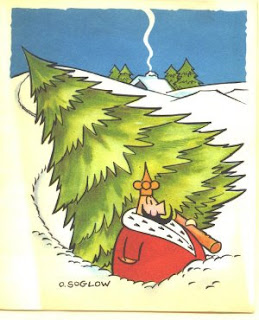 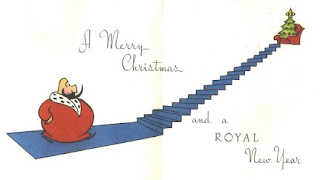 According to the old Christmas carol, Good King Wenceslas set out on his miraculous mission of mercy on the Feast of Stephen, which is today, December 26. In honor of that good king, here's some good art featuring the Little King, the cartoon monarch created by Otto Soglow, first in the pages of the New Yorker and then in his own comic strip and comic book. The Little King never spoke but always acted with a gentle childlike nature, giving the comic its own special air of quiet humor. Here's some Yuletide artwork from a 1951 Christmas card for you to enjoy while the snow is deep and crisp and even. The silent sovereign was also the star of several animated cartoons produced in the 1930s by the Van Buren Studios and you can enjoy the Little King's Christmas cartoon at the excellent Cartoon Brew blog. Perhaps the Little King's humorous humility will lift our hearts to another Good King, whose birth we supposedly memoralize during this season of the year.
Posted by Jim at 11:49 PM

How great to see the little King! My sister had a big book of his collected cartoons when I was growing up, and I remember reading it often. Or, should I say, I remember "looking through it" a lot, because there were hardly any words in it? Hmm.