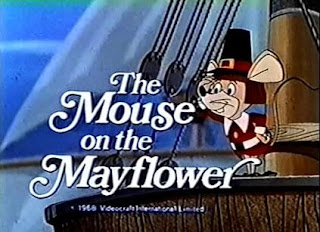 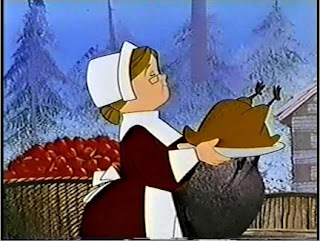 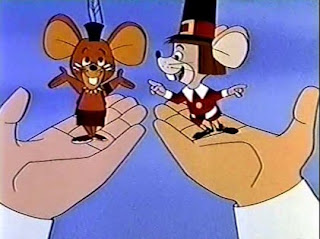 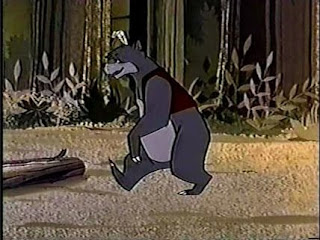 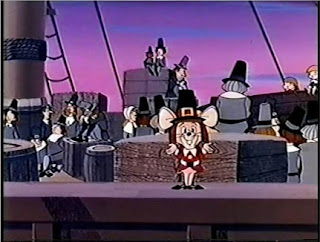 The cornerstone of the Rankin/Bass empire was its Christmas specials, but the famous animation studio also produced shows about other holidays, including The Mouse on the Mayflower for Thanksgiving.
Something of an oddity in the Rankin/Bass canon, The Mouse on the Mayflower is for one thing a cel animated production, and though Rankin/Bass certainly produced hand-drawn shows, its reputation was built on its unique stop-motion animation "Animagic" releases. For another thing, it isn't particularly good. Though the hour-long special has its moments and has a certain charm, its many elements somehow do not gel. There are comedic supporting characters such as a grandmotherly pilgrim (voiced by June Foray) who reacts with some bizarrely cartoony takes in which her face squashes and stretches just a little too much. Several comedic baddies are introduced only to be dropped from the narrative part-way through. These include a bumbling bear, whose design was unquestionably inspired by Baloo from Walt Disney's The Jungle Book (1967), which was in release while this special was being styled and produced. And while we're at it, let's mention a narrator who introduces the story by telling of his mouse ancestor and then turns to the titular rodent's journal to relate the story at hand—all of which is a direct lift from Walt Disney's TV framing of Ben and Me (1953) when it was presented on television in the 1957 Disneyland episode "The Liberty Story." (And by the way, when the narrator mouse shows us the Mayflower Compact—complete with Willyum's tiny mouse prints—let's just say that's either a very tiny document or the narrator is one very large mouse.) Given its at-times awkward storytelling and its substandard design, the special makes one wonder if it was hastily produced to meet a last-minute order for a quickie Thanksgiving TV special. But as always with Rankin/Bass, one of the best elements is its songs, performed in this case not by Bing Crosby, who was the original choice, but by the excellent Tennessee Ernie Ford, who is also our narrator (another Rankin/Bass tradition—think Burl Ives as Sam the Snowman). Along with some expressive visuals, the songs (composed as usual by Maury Laws and the "Bass" of Rankin/Bass, Jules Bass) beautifully evoke November, Thanksgiving and some of the historical events and timeless themes from that first feast of gratitude for the Lord's blessings. The Mouse on the Mayflower originally premiered in prime time on Saturday November 23, 1968, "in Living Color on NBC." It was rebroadcast several times, including on the afternoon of Thanksgiving 1972, sponsored in its entirety by McDonald's. There aren't that many major TV "spectaculars" produced about Thanksgiving and if for no other reason, The Mouse on the Mayflower remains a special Rankin/Bass special.
Posted by Jim at 11:59 PM