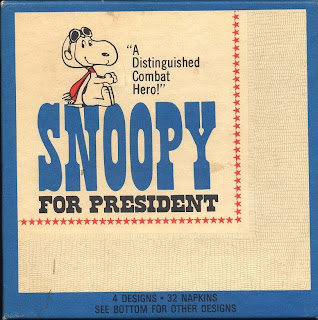 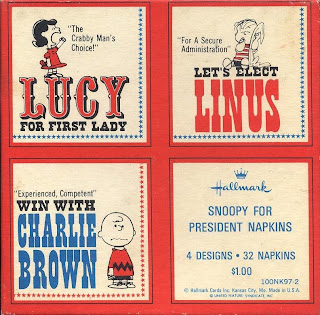 It's almost Election Day, so thought I might post a suitable bit of artistry to add some fun to the proceedings. Hallmark, one of the best and longest-running Peanuts licensees, issued this set of "Snoopy For President" beverage napkins in what the price guides characterize as the early 1970s, but I dunno, I'm guessing earlier than that... I'm guessing the presidential election of 1968, although the designs could be from the 1972 election. The first image shows the top of the box, the second shows the bottom, with the other three napkin designs included in the box. Interesting that Lucy could only "run" for the position of First Lady. Today, in the era of Hilary Clinton and Sarah Palin (to cover both ends of the political spectrum) Lucy would certainly be competing for "top dog" position, not vying for a role as White House helpmate. (Besides, you know her aversion to kissing beagles—"Dog germs! Get the iodine! Get the disinfectant!") Quite frankly, I'd vote for— or at least very much want to go to a party thrown by— anyone who would use these napkins.
Posted by Jim at 11:44 PM

Yay, these are WONDERFUL!

That said, I'm quite sure Obama would use these napkins. ;-) He's no blockhead.

Thanks for sharing these, Jim. I don't remember these specifically, but they sure remind me of all the Peanuts stuff around when I was a kid in the late 60s - early 70s.