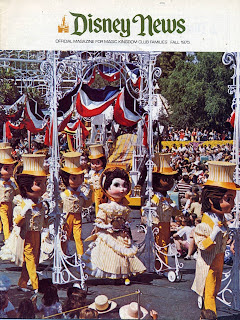 Among other things, Independence Day is about history, so let's look at a historical celebration of America, freedom, innovation, music and all things July Fourth-ish, Disney style. As part of the US Bicentennial celebration, both Disneyland and Walt Disney World presented America on Parade, a stylish and spectacular musical pageant that was one of the biggest and most unique parades ever presented at the Disney Theme Parks. "Biggest" is an apt term for at the heart of this patriotic parade are the "People of America"—oversized, eight-foot-high doll-like costumed characters representing both historical personages such as Ben Franklin and Betsy Ross as well as common folk through 200 years of Americana. These whimsical players danced, marched and cavorted along with 50 giant-sized parade units. The only "real" people in the parade were the members of the specially-invited high school or college band which played in the parade's grand finale.

This colorful extravaganza was presented from June 14, 1975, through September 6, 1976, and was enjoyed by an estimated 25 million guests. Led by Mickey, Goofy and Donald in appropriate Spirit of '76 garb, and promoted with a fair amount of delightfully-designed merchandise, the pageant was covered with not one but two cover stories in Disney News magazine, one of which, from the Fall 1975 issue, is pictured above, along withe some wonderful photography that accompanied the article inside the magazine itself. Stylized, fanciful and truly memorable in its distinctively different Disney style, America on Parade is now part of both Disney and American history as a red, white and true-blue celebration of our national heritage.
Posted by Jim at 11:45 PM