13 Bewitching Things You May Not Know About Bedknobs And Broomsticks 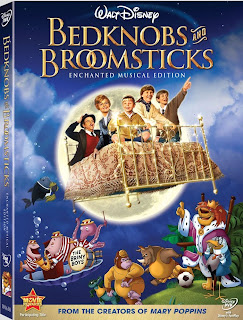 Compared to Eglantine Price, Harry Potter is a wizard wannabe. Before the Hogwarts School of Witchcraft and Wizardry was a gleam in the eye of J.K. Rowling, Miss Price learned the art of magic through the Emelius Browne Correspondence College of Witchcraft in Bedknobs and Broomsticks (1971). As readers of this blog well know I have a great appreciation of, affection for and fascination with this spectacular musical fantasy, conjured up by the terrific team of Bill Walsh, Don DaGradi, Robert Stevenson and the Sherman Brothers (not to mention Walt Disney). Today, November 11, there's a new article by me on the D23 website. Focusing on thirteen "lucky" fascinating facts about this Disney classic, the piece is as of now up as the lead article on the D23 home page, where you will see my credit, "D23's Jim Fanning uncovers 13 spellbinding facts behind Disney's magical musical fantasy." (If you are looking for my byline, you will find it here as opposed to the article itself.) The photo you see there, of Angela Lansbury as Miss Price unwillingly wearing a gaudy hat placed on her head by Prof. Browne (David Tomlinson) at Portobello Road, is one of the many moments cut from the film before its premiere but reinstated for the extensive restoration of the film—and it's this nearly complete "producer's/director's cut" that's on the recently released DVD, pictured above. Be sure and check out the online article, "The Eternally Bewitching Bedknobs and Broomsticks" by Jim Fanning on the D23 website.
Posted by Jim at 3:16 PM