A New President For The Hall 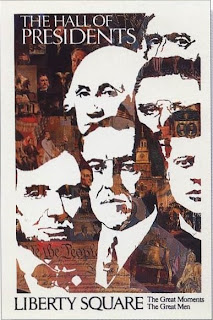 On Tuesday, Barack Obama was inaugurated as the 44th President of the United States (or hadn't you heard?). An Audio-Animatronic figure of President Obama will be added to the line-up of Chief Executives in the Hall of the Presidents in Liberty Square in Walt Disney World Resort. Reportedly, the President will be recording a new speech to delivered as part of the attraction, in what has become a tradition started by Bill Clinton and followed by George W. Bush. An original 1971 attraction at the Magic Kingdom in Walt Disney World Resort in Florida, the Hall of the Presidents was closed in November 2008 for an extensive renovation, including a state-of-the-art updating of the projection and lighting systems. Master Imagineer sculptor Blaine Gibson, now 90, will not be sculpting the new figure as he has done for all the other Presidential figures in the show, but he will be a consultant for Walt Disney Imagineering Director of Sculpture Valerie Edwards (who by the way has sculpted some of the Walt Disney Classics Collection pieces). The revised version of the Hall of the Presidents (which was originally heralded with this magnificent poster, above), featuring a new and history-making President, is scheduled to reopen on July 4, 2009.
Posted by Jim at 2:47 AM