The Honorary Degree of Th.D 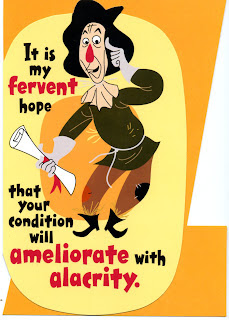 Hallmark Cards has presented some artful uses of the Disney, Peanuts and Looney Tunes characters on their greeting cards, and now they are offering some wonderfully stylized depictions of the MGM Wizard of Oz cast—or at least the Scarecrow. Naturally Hallmark’s use of the Oz characters usually utilize stills of the beloved film, as the card company is an official Oz licensee. But here the film version of the Scarecrow (clasping his honorary “Doctor of Thinkology” diploma and offering a brainy get-well greeting in a card cleverly designed in the shape of the word “Oz”) is depicted in a cartoony style that would actually make a wonderful animated character. Even though the branding on the back of the card would indicate an entire line of similar cards, this is the only example I’ve so far been able to find featuring this appealing graphic design.
Posted by Jim at 1:02 PM

This is so cute! I do hope Hallmark makes more.

Did you see the super cute, comic-book looking card that Hallmark had with Snow (my fav, of course), Cinderella and Sleeping Beauty? Had to get a couple of those ones!!

That scarecrow is so appealing! Too bad the artist is anonymous - probably some struggling young artist I brushed by in the supermarket today and didn't even know it. I'll be anxiously on the lookout for more in the series....
Kevin